The Canadian public has responded to the Syrian refugee crisis with an outpouring of generosity, offering money and time at a rate that has left the country's often-neglected settlement workers feeling grateful but also overwhelmed.

The Canadian Council for Refugees is meeting in Hamilton for its twice-yearly national meeting, and the impending arrival of 25,000 Syrians dominated conversations, injecting a giddy, anxious energy to the event.

"I feel like I'm clinging to the edge of a runaway train," said Louisa Taylor, director of the Ottawa-based non-profit Refugee 613, at a workshop in the Sheraton hotel here. The Canadian Council of Refugees is an umbrella organization whose membership is made up of groups that help refugees and immigrants.

Those who support the refugee influx are putting their money – and often their household appliances and second-hand clothes – where their mouths are. Ms. Taylor said that organizations across the country were receiving more donations than they knew what to do with.

"It's insane," Ms. Taylor said later. "Canadians are so mobilized, every single agency in this room is inundated with offers of help."

"These agencies are not set up to have armies of volunteers," she added.

Calling it a "good problem," Ms. Taylor urged people to give cash rather than goods to refugee settlement groups, many of which lack the staff or money to funnel goods to Syrians.

Many at the conference emphasized that they didn't want the public to stop volunteering and donating, only that they should do so in a targeted way.

"The public should not be told to calm down," Ms. Taylor told a workshop on the Syrian refugees, urging her colleagues to capitalize on the new wave of sympathy for immigrants.

But there was a palpable ambivalence about the sudden public interest among those who have been working for years and sometimes decades on refugees.

"These folks have worked on a topic that's been ignored at best and maligned at worst for years, and suddenly the country cares about what they're doing," Ms. Taylor said. "In addition to having this inundation of refugees, they're having an inundation of Canadians."

Others complained that the interest in Syrian refugees was disproportionate, relative to other refugee groups who are also imperilled and vulnerable.

"My feeling is that the Syrians are overshadowing everyone else," said Paul St. Clair, an immigration counsellor at the Toronto-based settlement group CultureLink who specializes in Roma people fleeing Hungary. "They are the sexy ones. It's like, 'I wanna talk to my neighbours and say I have Syrians here.'"

Mr. St. Clair volunteers with Toronto's Catholic archdiocese and says that when people are told that the church's Syrian refugees are accounted for, but there remain Iraqis who need help, the prospective donors lose interest.

"We hope it'll mean a greater interest in refugees, ongoing, and that it's not just the Syrians," he said.

This wave of public enthusiasm for helping refugees is bigger than anything since the arrival of the Vietnamese boat people in the late 1970s, said Rob Shropshire, a refugee co-ordinator for the Presbyterian World Service & Development.

A sponsorship agreement holder, the church is trying to link sponsors with refugees, but has more generous Canadians lined up than needy Syrians.

"We have a bit of a queue," he said. "People have to be prepared to be patient."

Smiling, but looking slightly harried, Mr. Shropshire said his organization is just managing to keep up with the tide of new work.

"Our noses are at the waterline," he said.

But as he paced toward a lunch meeting, Mr. Shropshire said he was looking forward to another refugee surge. 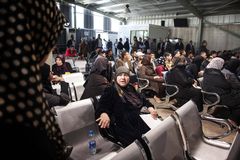 After three years in limbo, this Syrian family pins hopes on Canada
November 27, 2015 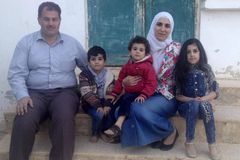 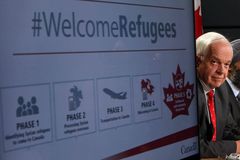