The shooting of an auxiliary RCMP officer in Alberta on Saturday is raising questions about whether more could be done to protect the safety of such officers who don't carry firearms.

Auxiliary Const. Derek Walter Bond, 49, was shot in the arm and torso when he and a regular RCMP officer — Const. David Matthew Wynn — walked into a casino just north of Edmonton while on a routine investigation.

Bond was released from hospital on Saturday evening, while Wynn remains in grave condition and police said he was not expected to survive a gunshot wound to the head.

As an auxiliary officer, Bond did not carry a gun though normally auxiliary officers carry pepper spray and a baton. The dramatic events that unfolded in the community of St. Albert on Saturday are thrusting the role of such officers into the spotlight.

"They don't have near the training that a regular member does," he said. "They're really not trained in situational use of guns, like when do you pull it and when do you shoot."

He said auxiliary officers are civilians who volunteer part-time to do jobs that free up regular police officers, such as traffic control. They also ride along with officers, as long as they're under the direct supervision of a regular member of the RCMP.

There are over 2,000 auxiliary constables in the RCMP across the country. Creasser said they typically wear a RCMP uniform with a small patch on the shoulder that distinguishes them as an auxiliary officer.

He said auxiliary officers are a huge help to regular officers. Creasser, who is now retired from the RCMP, said when he was with the force he often used them to direct traffic at collision scenes. He added they carried firearms at one time but the practice was stopped many years ago.

Creasser said the St. Albert shootings should signal to government that the safety of all police officers — not just auxiliary officers — is under threat.

"As we're starting to find out in today's world, police are becoming a target," he said.

"Not that long ago, just out my back door in Kamloops here, there was another member shot. We've seen members that were just sitting in their police cars in New York get shot. Paris officers are getting shot. It's a really disturbing trend."

He said the RCMP is "hugely under-resourced" and it's about time governments at all levels got that message. The RCMP needs better services, better equipment and more members, he said.

Steve Summerville, president of Stay Safe Instructional Programs and a former police training officer in Ontario, said in his experience auxiliary officers are given comprehensive training, but not nearly the same amount as regular officers.

He said they are trained in how to respond to potentially violent situations using verbal strategies, self-defence and their batons, but are not trained in higher levels of use-of-force such as when to fire a gun.

He said it's too soon to jump to conclusions about what took place in St. Albert. He noted that Bond was with an regular officer and would not have been left on his own.

"I think we should get all the facts to determine exactly what did transpire before we start seeking solutions," he said. "You might find that even if the auxiliary member had been armed with a firearm to some degree, it may or may not have made a difference."

Laura Huey, a sociology professor at the University of Western Ontario who has studied policing, said there are multiple reasons why auxiliary officers do not carry firearms.

She said there have long been concerns within policing circles about using civilians to perform regular policing functions. Police unions would not want to see volunteers filling roles that could be undertaken by regular members, she said.

Huey added that concerns have been raised about training standards, the quality of auxiliary recruits and the costs of training and arming civilians — which would have to be paid by taxpayers at a time when governments are trying to shrink police budgets, not expand them.

"The role of auxiliary officers does need to be reconsidered. However, I'm not convinced that re-arming them is necessarily the answer," she said in an e-mail.

"To reverse this policy the public would have to be willing to increase police budgets in order to pay for comprehensive reviews of current auxiliary members, train them to police member standards and pay for re-arming and other costs. Why not just hire more police officers in remote communities?"

RCMP ask why suspect with 'complex' past was on the streets
January 18, 2015 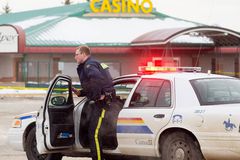