An eruption of gang violence in one of Toronto's busiest crossroads – the Eaton Centre – has challenged the city's reputation for downtown safety while drawing a promise from the mayor that "we're going to apprehend this person, and we will convict this person."

The gunman who fired on at least one intended target Saturday evening sprayed bullets across a crowded food court that is ringed with security cameras. Police said they have images of a suspect but did not release a description – an approach one retired homicide detective called an indication that an arrest may be imminent.

A 24-year-old man, Ahmed Hassan, was killed. Police say he was the intended target and that he had gang affiliations.

Six others were also shot, including a 13-year-old boy who was struck in the head. A 28-year-old pregnant woman was trampled as a frenzied stampede of shoppers tried to exit the mall. She recovered Sunday. Police said another shooting victim was also known to police.

The terrifying incident follows a rise in the number of shootings in Toronto this year, after years of decline. The graphic evidence of increasing gangland violence is a horrific echo of Boxing Day 2005, when 15-year-old Jane Creba was shopping just a few blocks from the Eaton Centre. She was killed after being struck by a stray bullet in the middle of a gang-related shootout.

"Every heart in Toronto was torn last night," Mayor Rob Ford said at the top of his Sunday afternoon radio show.

In Toronto, the Eaton Centre is the great equalizer – a magnet for residents of all cultures and classes. If you weren't at the mall that day, you were a week ago, or a month ago, or know someone who was eating butter chicken poutine when the shots rang out.

Through hundreds of cellphone snapshots and social-media dispatches from the scene, the incident became instantly and deeply personal for Torontonians.

Benjamin Bowman, concertmaster of the National Ballet of Canada, had met his wife at the Eaton Centre between the matinee and evening performance of Hamlet at the Four Seasons Centre for the Performing Arts.

As they contemplated the dinner options while standing near the Dundas Street end of the food court, the shooting began.

"I heard a couple of shots and I looked to my right and the guy is maybe five feet away from me – literally," the 32-year-old Mr. Bowman said. "And all I see really is the gun. I see a shell hitting the ground. I see a body just to the right falling to the ground."

Mr. Bowman and his wife hit the ground (with so much force his wife's shoulder was bruised) and took cover under a table for a few minutes before the gunman left the scene and security instructed people to clear out.

Mr. Bowman and his wife made a beeline for the Four Seasons as soon as they were safely out of the mall, to tell the other members of the orchestra that he was in no position to play. His hands were too shaky to hold his violin bow, his mind was reeling and his clothes were caked in food and spilled drinks after having crawled across the floor of the food court, he said.

Also witness to the shooting was Brett Lawrie, third baseman for the Toronto Blue Jays. At first, he wasn't sure if the loud noise was gunshots, he told reporters Sunday.

"And once we saw people run up the stairs and you saw the look on their face, like this wasn't a little thing. That's when I knew it was time to get out of there."

As panicked shoppers raced out of the food court, abandoning their cellphones, purses and recently purchased items in efforts to get out of the mall, Michael McCallion was moving in the opposite direction: to the scene of the crime. Mr. McCallion is the on-call operations commander for Toronto Emergency Medical Services.

The first medics to arrive triaged the worst of the wounded – a 23-year-old man with bullets in his neck and chest; the woman who had gone into labour; the 13-year-old boy shot in the head.

Trinity College School, a private institution in Port Hope, Ont. for students in Grades 5 through 12, wouldn't confirm that the boy is a student there but had a statement prepared regarding privacy of its students.

At least two family members were at SickKids Hospital with the boy on Sunday, including a young woman who said she was the boy's sister and was at the mall with him when gunfire broke out.

The family declined to give an update on the boy's condition, though a police spokesman said by Sunday morning he was talking.

In the face of fresh panic, police and elected officials have tried to persuade Torontonians this incident should not colour residents' views of their city.

Such assurances are little comfort to Moniruz Zaman, the uncle of 23-year-old Tasnia Mahmood, who was shot in the leg during Saturday's melee.

"I will not let my kids go to the mall any more. There's no guarantee they'll come back," Mr. Zaman said Sunday afternoon.

Adding to concern among city residents is the fact that police have not released a description or video footage of the suspect. Police fear it will "taint witnesses that we've not yet interviewed. And the balance between how much it will help the case and how much it will hurt is too great," acting deputy chief Jeff McGuire told The Globe.

Mark Mendelson, a Toronto retired homicide detective, said the hesitation to release information on the suspect indicates police have all the information they need, and may be worried about tipping their hand before an arrest.

"As soon as you put that guy's name and face out there, he's gone," he said.

Federal cabinet minister Julian Fantino, a former chief of the Toronto police and the Ontario Provincial Police, said the shooting underlines that there is a criminal element willing to fire guns in public without concern for who might be caught in the crossfire.

Mr. Fantino, now the associate minister of defence, said the federal government is trying to address gun and drug crimes with stiffer sentences.

"Some of these people obviously need to be taught a lesson," he said. "We haven't been able to effectively get their attention. That's why some of some of these sentences, severe sentences and mandatory sentences are absolutely critical."

Bobby Umar, a 41-year-old motivational speaker, was eating Chinese food with his son (while his wife and daughter were in the bathroom) when the violence broke out.

He said he stood near the shooter and while he didn't see his face, he noted he was black with dreadlocks that were an inch or two long and he was wearing a loose brown coat.

When Mr. Umar heard two shots, "I looked up and I saw this guy and all of a sudden he fired off another five or six shots in a row. Kind of all over the place – he was shooting straight and upwards – it looked like he was clearing a path so he could take off."

With reports from Carys Mills, Robert MacLeod and Elizabeth Church

Two remain in hospital, four gunshot victims sent to hospital have been released:

Tasnia Mahmood, 23, was wounded in the right leg.

Nicholas Kalakonis, 22, was wounded in the left leg.

A 30-year-old woman suffered a "gunshot-graze wound" to her abdomen and has been released from hospital.

A 22-year-old woman was wounded in the hand and left hospital without treatment.

A 23-year-old man is in hospital after suffering "multiple gunshot injuries" to his neck and chest.

A 13-year-old boy who was visiting from Port Hope with his family was wounded in the head and remains in hospital.

As well as the gunshot victims, a 28-year-old pregnant woman went into labour after being knocked down in the rush to flee the area. She did not give birth and was discharged from hospital on Sunday. 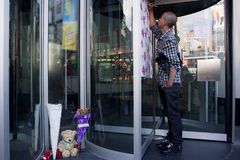 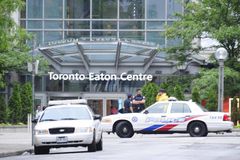 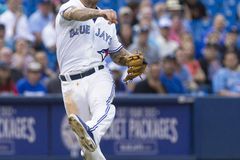 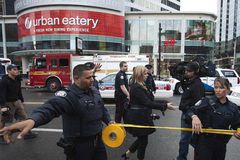 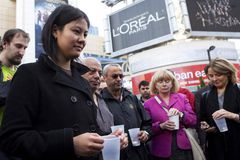 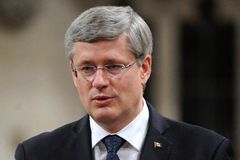 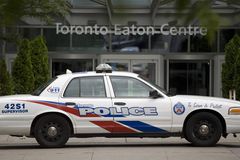 Follow Dakshana Bascaramurty,  on Twitter @DakGlobe
Report an error Editorial code of conduct
Due to technical reasons, we have temporarily removed commenting from our articles. We hope to have this fixed soon. Thank you for your patience. If you are looking to give feedback on our new site, please send it along to feedback@globeandmail.com. If you want to write a letter to the editor, please forward to letters@globeandmail.com.
Comments are closed