Alberta's oilsands could be heading for another showdown over tailings ponds after an independent assessment found that the cleanup plans of six major operators don't meet new rules.

Suncor's intentions have been rejected by the Alberta Energy Regulator and a clean-energy think tank says its analysis has concluded plans by other producers have similar shortcomings.

"All companies have submitted plans that are not consistent with Alberta's tailings management framework," said Jodi McNeill of the Pembina Institute. "We expect the regulator to reject other deficient plans."

Last July, the regulator released a directive requiring producers to outline how they will deal with the extensive toxic ponds that cover more than 220 square kilometres and contain almost 1.2 trillion litres of contaminated water.

Toxic materials include bitumen, naphthenic acids, cyanide and heavy metals. They pose a threat to wildlife and release air pollutants and greenhouse gases. Research suggests they are leaching into groundwater.

A spokesman for the regulator said the Suncor decision shouldn't be seen as a precedent.

The directive was intended to check the ponds' growth. But Pembina found that, taken together, tailings volumes won't start dropping until 2037 – 17 years after the government's original target.

The new rules were also supposed to push producers to progressively clean up the ponds and to have sites ready to reclaim no more than 10 years after a mine closes.

Pembina suggests the filed applications don't meet the spirit of those rules. Estimates for full reclamation range from 15 years to more than 70 years.

Suncor's Millennium and Steepbank mines are to close in the early 2030s and take until 2095 to reclaim.

Most of the operators contacted by The Canadian Press declined to comment while their applications are before the regulator.

But Syncrude spokesman Will Gibson said his company's plans meet the directive, despite the Mildred Lake mine's expected closure in the mid-2030s with full cleanup by 2110.

Gibson said the regulator is only asking companies to have lands ready to reclaim within 10 years.

"Ready to reclaim doesn't mean that the actual reclamation of the tailings deposit has to be finished or even get started," he said.

"Based on these definitions, our plans meet all the requirements."

McNeill said the directive allows some flexibility, but the regulator should interpret and enforce the directive aggressively to ensure Albertans won't have to keep their eye on the tailings ponds for generations to come.

In the Suncor decision, the regulator emphasized that companies must prove that "ready to reclaim" means what it says. The directive also stipulates that risks in technology used to clean up the ponds must be identified and credible alternatives offered.

Six out of the eight mines studied by Pembina propose to use end-pit lakes. That involves pouring treated tailings into an engineered basin and capping them with fresh water.

In its ruling on Suncor's proposal, the regulator called that approach unproven. It said that without more information, or a realistic plan B, relying on end-pit lakes wasn't acceptable.

Suncor has said it will work with the regulator to bring its proposal in line.

The directive is the regulator's second attempt to deal with tailings. Another one from 2009 was scrapped soon after producers complained they couldn't meet its targets.

McNeill said the Pembina analysis is an attempt to urge the regulator to enforce its orders while mines are still generating revenue.

"There's definitely more urgency," she said. "Some mines are going to be closing in 10 to 15 years from now. There's no room to kick the can down the road even further."

McNeill acknowledged remediation is harder when oil prices are low.

"Cleaning up tailings is expensive," she said. "The fact of the matter is, though, that they've created this waste and they're responsible for it."

Alberta's auditor general has estimated the environmental liability of the tailings ponds at $20.8-billion.

"Albertans have been waiting five decades for this toxic legacy to be dealt with," McNeill said.

Suncor to speed up maintenance after Syncrude fire; will meet targets
March 27, 2017 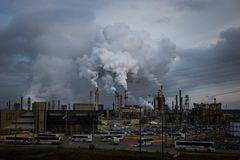 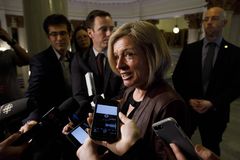 Despite gloomy headlines, Alberta oilsands output expected to set records in 2017
March 19, 2017
Report an error
Due to technical reasons, we have temporarily removed commenting from our articles. We hope to have this fixed soon. Thank you for your patience. If you are looking to give feedback on our new site, please send it along to feedback@globeandmail.com. If you want to write a letter to the editor, please forward to letters@globeandmail.com.
Comments