Christina Cadieux, 24, commutes back and forth to work across downtown Ottawa on her long board. She's had her fair share of close calls with cars on the street – most recently, one evening, when a taxi turned left on a red light, and she collided with it, her board skidding underneath the car. She came away with some bruises, but she shrugs: "I flipped him off and that was it."

She was far luckier than 28-year-old Ralph Bissonnette, who died on Monday in Toronto after a collision with a taxi driver while he travelling on the street with his long board, and who was remembered in a vigil by the skateboarding community Wednesday night. (It's still not clear what happened, but the taxi driver has been charged with second-degree murder and witnesses have reported an altercation between the two men.)

Canadian cities have varying bylaws on skateboarding use – Vancouver has opened its streets to skaters for years as long as they use caution, but in cities such as Ottawa, Montreal and Calgary, travelling by board on the street is illegal and subject to a fine. In Toronto, the bylaw states that when a sidewalk exists, skaters can't travel on the street, except when crossing.

But Toronto's fatal collision, which occurred on a street with a wide sidewalk, has renewed a discussion about the growing presence of skateboarders in urban centres, and how best to handle the safety issues that arise when people travelling as fast as 60 kilometres – usually without helmets – share space with drivers who aren't prepared for them.

Skateboarding is one of the fastest growing sports in North America: According to the National Sporting Goods Association in the U.S., participation in the sport nearly doubled between 1998 and 2007, with more young women also taking it up. Anecdotally, skateboard stores in Canada report more people returning to the sport, or taking it up for the first time at an older age. Even as teenage stunt riders grow into adult enthusiasts looking for an easy way to get to work, or to exercise with their kids, skaters still suffer from a reputation as hotdoggers and risk-takers.

But in a society fretting about obesity rates and gas-guzzling, they argue that long boarding is cheap, green-friendly, and accessible to workers and young people, such as Ms. Cadieux, who don't have any place to store a bike. A rider can hop the bus in bad weather, they point out, and at least if you get "doored" on a skateboard, you can jump off and smash into the open car door – you will still be banged up, but it's better than flipping over the handlebars of your bike.

"Skateboarding is always going to exist in the natural urban environment," says Kyle Dion, president of Newline Skateparks in British Columbia, which designs skate parks for municipalities across Canada.

Mr. Dion, whose two sons, 8 and 14, both skateboard blocks from home to their respective schools, argues that smart cities will learn to make room for skaters, especially as the sport's image goes mainstream, and city centres become more congested. "As the stigma of skateboarding disappears, more people will carry it with them through their life … There should be allowances for how skateboarders can interact with everyone else, instead of thinking we're just going to push them off into these [skatepark]reservations."

Many Canadian towns and cities are beginning to build more concrete, free-of-charge skate parks, which has created another problem, Mr. Dion says: How do teenagers, who can't drive, travel to them? Of course, they hop on their boards. And for all the slides and flips attempted at skate parks, car and trucks are the real danger. Last fall, a Toronto skateboarder was killed in a collision with a garbage truck; last spring, a teenager boy in Montreal died when he was caught underneath his school bus.

According to a 2011 report by Skaters for Public Skate Parkson looking into skateboarding fatalities in the United States, of the 42 fatalities included in the study, 26 occurred while the skater was on a street. (Bombing, where riders speed straight down steep hills, resulted in another 13 deaths; only one was the result of "skitching," which is performed on a half-pipe or pool.) More than half of the deaths involved skaters between the ages of 13 and 18. And while the helmet-averse attitude is slowly changing – especially among long boarders who can reach extremely high speeds – most skaters admit they don't wear them regularly, a pattern that likely needs to change, advocates say, if they want to make a convincing case for an equal place in the bike lane.

Taxi driver charged with murder after skateboarder killed
May 14, 2012 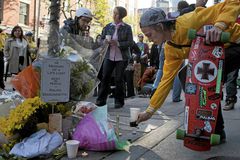 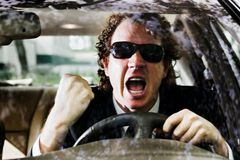