Molly Shoichet wants Canadians to know what they're paying for when their tax dollars are used to fund research.

A professor of biomedical engineering at the University of Toronto, Dr. Shoichet has won kudos internationally for her work on hydrogels – versatile materials that can act as scaffolding to help rebuild damaged tissues in the body.

But for the past year, Dr. Shoichet has been focused on building public awareness of what scientists do all day.

On Monday, Dr. Shoichet is set to officially launch Research2Reality, a $400,000 social-media campaign she is spearheading that is designed to shine a spotlight on the work of academic researchers across the country. It is one of the most ambitious outreach efforts of its kind in Canada to date and it comes at a time when research advocates worldwide are trying to persuade their governments of the importance of basic, curiosity-driven research.

"We're not a lobby group," Dr. Shoichet said. "Our focus is on capturing the imagination and the curiosity of the public to engage them in what's going on."

Six research-intensive universities across the country have partnered in the project and Dr. Shoichet hopes more will join.

At its heart, the efforts consists of 70 short videos, each approximately two minutes in length, in which some of the country's star researchers describe their work and what motivates them.

The topics span the gamut, from using quantum physics to develop faster computers to finding new treatments for cancer. Many are linked by a common theme, such as research related to water quality. What they all share, Dr. Shoichet said, is an emphasis on how research under way right now in Canadian university labs could impact the future.

Toronto producer Mike MacMillan, founder of Lithium Studios, directed the videos, which have a fast-paced cinematic quality – tailor-made for quick consumption on mobile devices or for linking to via Facebook.

Dr. Shoichet said the subjects of the videos were coached to describe their work and goals in a way that is accessible to anyone. The videos serve as a general introduction to each researcher but viewers can also delve further to get more information by following links to relevant articles and biographical details.

The approach adds to a growing body of online profiles about Canadian scientists, many of whom have been be trumpeted by their universities, funding entities or provinces.

For example, Research Matters, a promotional effort by the Council of Ontario Universities, has built up a large bank of short articles on its website that highlight researchers across the province. Similarly, the Canada Foundation for Innovation, which channels federal dollars toward research infrastructure and projects, produces features stories with embedded videos about the scientists who are enabled by their investments.

What makes Research2Reality different, said Dr. Shoichet, is an approach that doesn't speak for one region, field of research of funding stream.

"I think of us as waving the Canadian flag of research," she added, comparing the individuals profiled on the site to the athletes who make up Canada's national team at the Olympics.

Evidence suggests that Canadians are in broad agreement with the message that research is worthwhile – even though support for research doesn't rank highly when voters are asked what policy issues are top most on their minds.

A new poll commissioned by Research Canada, which advocates for investments in health science, found that 92 per cent of Canadians say basic research should be supported by the federal government. The poll, also released on Monday, is unrelated to the Research2Reality effort and involved a survey of more than 1,000 Canadians conducted by the online research company Vision Critical.

Dr. Shoichet said one of her hopes for Research2Reality is that it will help Canadians think about research not only when they are specifically asked about it but whenever they are considering issues of social and economic relevance for the future of the country.

"We talk so much about the innovation economy, but if we don't invest in research it won't be there," she said.

Data from the Organization for Economic Co-operation and Development show that total spending on research and development as a function of GDP has been falling steadily in Canada since 2008 and sits well below the OECD average. 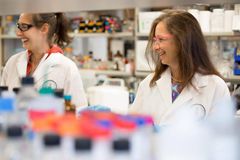 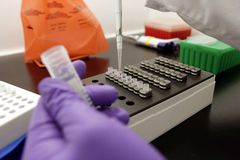 Opinion
This is the path of innovation
October 27, 2014 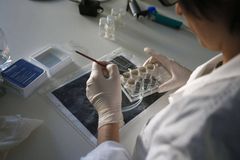