Corporal Nathan Cirillo knew from a young age he wanted a career protecting his community.The 25-year-old joined the cadets in his hometown of Hamilton as a young adolescent, and as soon as he was old enough, enlisted with the Argyll and Sutherland Highlanders – a tight-knit reserve regiment of about 200 soldiers known simply as the "Argylls."

It was this dream – working in the army, with an eye toward a career as a border guard – that brought the young father to Ottawa, where he was shot and killed Wednesday in an attack that has sent shockwaves across the country.

In a terrible twist of timing for the young soldier, who recently trained for the better part of a year in Petawawa, Ont., Cpl. Cirillo was fulfilling a short rotation with a one-month maximum as a guard at the war memorial. In fact, the position was created only seven years ago, after a string of vandalism attempts.

The National War Memorial, which includes the Tomb of the Unknown Soldier, honours Canadians who died for their country, and is the nation's central gathering place on Remembrance Day.

"He was a wonderful young man. Not an enemy in the world," said Cpl. Cirillo's aunt, who asked that her name be withheld.

She said she didn't focus on the news reports Wednesday morning, not realizing her nephew was in Ottawa. It was only when she saw closeup footage of the body laying near the Ottawa War Memorial – where he had been stationed – that she realized it was him.

"When I saw the ambulance take him in and I saw his receding hairline, I knew it was my nephew," she said.

Standing in the doorway of her Hamilton home, Cpl. Cirillo's aunt gave a small, defeated sigh when another resident informed her that police had released the name of the suspected shooter, Michael Zehaf-Bibeau. "A terrorist attack," she said. "In our own country."

Cpl. Cirillo leaves behind a 6-year-old son, and spent almost all of his spare time with his family, and working out, she said. "He was into being fit. And being a father and a son."

He was also an animal lover. Through his Instagram account, Cpl. Cirillo chronicles how he recently rescued an abandoned puppy. He found the young German shepherd-mix just over a month ago, "extremely skinny" and "shivering over an empty can of dog food," according to the account.

After nursing the dog back to health – including recruiting a veterinarian to neuter the animal and update his shots for free – he found a family to adopt him.

"Found him a pretty home, hope he has a good life," Cpl. Cirillo wrote four weeks ago.

He also posted many grinning photos of himself in his military gear, referring to his colleagues in the Argylls as his "family."

Colonel Geordie Elms, a former commanding officer of the Argylls, said that his "heart just fell" when he saw the regiment's distinctive gold leopard badge – referred to as the "cat badge" – on the fallen soldier on television broadcasts. "That could only be one unit," he said he thought at the time.

Because the role is considered a ceremonial, albeit prestigious one, he said, Cpl. Cirillo's gun likely would not have been loaded.

Hamilton Mayor Bob Bratina said he visited with Cpl. Cirillo's family – including his two sisters – at their east-end home on Wednesday.

"It was very sad," he said. "We had some hugs and tears." He described Cpl. Cirillo's family as a "typical Hamilton family – beautiful home, clean as a whip, pictures of Nathan and his two sisters on the wall." He said they had recounted how excited he was to be a part of the army.

"He was so proud of it," he said, "and looked really great wearing the Argylls kit."

With reports from Kate Hammer, Bill Curry and Joe Friesen

With reports from Kate Hammer,Bill Curry and Joe Friesen 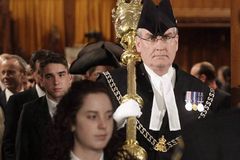