It's late afternoon and Greg Johnson is hunting. He'd spent a week preparing for this day – tracking clouds, looking at satellite images, guessing where to go. But now, tucked amid fields along the eastern fringe of Saskatchewan, he's come up empty.

"So far, it hasn't really panned out the way we were hoping," says the storm chaser, in his F-150 truck just south of Pelly, Sask. The storm cell is further north, and weaker, than he expected. Meanwhile, one province over, tornado warnings are cutting into TV broadcasts. "You know what? I really wish I was in Alberta right now," Mr. Johnson says.

It's been a summer of twisters in the Prairies, with more than 40 tornado sightings, mostly in Saskatchewan. With them come storm chasers, often equipped with little more than cameras, a cellphone, weather reports and four-wheel drive.

"There's something about Canada being this last frontier," says Reed Timmer, 32, a veteran Oklahoma storm chaser who has visited all three prairie provinces this summer.

The whirling prairie skies have sparked a storm chasing boom of sorts, luring Mr. Timmer and other Americans north. Diligent chasers see over a dozen tornadoes a year – sometimes arriving first to help the injured left in the storm's wake – and most do it simply for the rush, with no end game other than photos and bragging rights.

More chasers lead to more reported tornadoes, which in turn bring more chasers – a sort of vicious circle of the storm subculture.

Major storms are triggered by three factors. The first is instability, typically a clashing of hot air and cold air. The second is moisture, which Environment Canada warning preparedness meteorologist Dan Kulak says is like gas for a car. Without it, "the storms just don't go." Finally, storms need a trigger, which could be daytime heat, a cold front or weather rolling in off a mountain range. "If you only have two of [the causes], you don't get big storms, or you don't get any storm at all," he says.

To become a tornado, a storm needs a fourth ingredient: "wind shear," or rapidly changing gusts that starts the storm spinning. This summer has been humid and hot across much of the prairies, creating prime conditions for storms and tornadoes.

"Saskatchewan was starting to get a reputation for storms – you know, wide-open, flat Saskatchewan," says Mr. Kulak, who is based in Edmonton. "That seems to be where they're setting up."

Storm chasing has surged in popularity in the United States, driven by reality TV shows such as Discovery Channel's Storm Chasers (cancelled early this year) and, 16 years ago, Twister, the Bill Paxton and Helen Hunt blockbuster. There are full-time chasers and weekend warriors – America's so-called Tornado Alley states can see traffic jams if a twister hits on a long weekend, chasers say, as dozens of cars track the same funnel cloud.

But some Americans are reluctant to cross the border for the Canadian tornado season, which begins later and is less predictable, Mr. Timmer says. But they're missing out, with the season already winding down. "There are incredible storms up there. Some of the most amazing storms I've seen in my 14 years of storm chasing," he says.

In Canada, however, chasing is still considered more of a niche pursuit – even during this busy summer, in which there have been no reported deaths as a result of tornadoes. "It's the untamed wilderness up here, particularly in the prairies," says Toronto-based tornado chaser and TV host George Kourounis, 42. "My friends out in Saskatchewan are loving it."

Mr. Johnson is Saskatchewan's foremost chaser, a 42-year-old Regina photographer and father of three who makes his living chasing prairie storms, speaking to students about his experiences and teaching photography classes. "I wanted my children to see that – not to sound like I'm on Oprah, but – you really can do anything you want to do," he says. The kids, ages 11, 9 and 5, always ask to come with their father on his adventures.

"Oh yeah, they would love to go," he says. "But I would have child and protective services on my doorstep pretty quickly."

As storms have surged this summer, hobbyist chasers increasingly join Mr. Johnson on the roads. Saskatoon geophysicist Gunjan Sinha, 32, took time off work this summer to chase storms. He'd been chasing since 2005, and had struck out each year. This year, he says he saw his first twister, then his second – then his 10th. "This year's been the best year ever," he says. "I've been chasing so much I can barely keep up with processing my pictures and videos."

The storms are spread out. Alberta's emergency alert system issued four urgent tornado warnings last year, sending out tweets and interrupting local broadcasts. This year, it has done so 16 times.

Environment Canada won't formally confirm a tornado until cases are reviewed in the fall, but as of last weekend had counted 42 "probable" tornadoes across the prairies, 32 of them in Saskatchewan. The prairie-wide annual average is 31. Alberta, Saskatchewan and Manitoba have also had 59 cases where wind topped 90 km/h, with the annual average being 44; and 146 storms where hail was at least two centimetres in diameter, more than the prairies' average of 128.

Environment Canada's Mr. Kulak says the chasers inflate formal tornado numbers by spotting them, because the agency doesn't tally a tornado unless it's reported.

"We have a lot of eyeballs reporting things, so the numbers are going to be high," Mr. Kulak says. "There's no official researchers out there, it's all just people doing it for the heck of it – thrill-seekers." 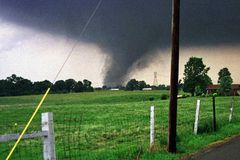 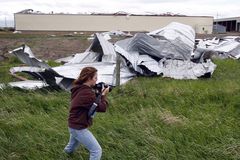 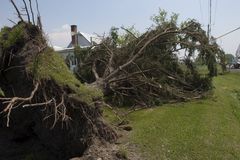 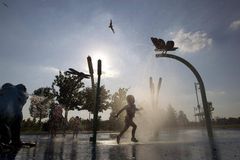 Opinion
More disasters in the making after Elliot Lake
June 27, 2012 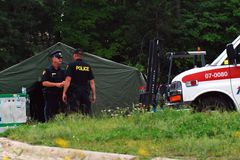