A state of emergency has been declared in the central Ontario community of Angus, Ont., after a tornado swept the county, tearing off roofs and ripping down trees in its path.

The tornado touched down after an afternoon of severe weather warnings in parts of Ontario, and hours after four men were hit by lightning in Stouffville.

Police in Angus closed off the hardest hit street, 5th line, where at least 30 homes were reported to have lost their roofs.

"That one came from across the road," she said, pointing to a toppled tree that almost reached the front door. "That's someone else's roof," she added, motioning to a large piece of wood with shingles attached.

Environment Canada's Rob Kuhn confirmed on Tuesday night it was a tornado.

In other parts of Angus, residents had only power outages, they were still shaken and in awe.

"I've never seen the lights go crazy like before; I thought I was in a disco hall," said Steve White, an employee of the local No Frills store.

"It honestly felt I could just [reach up] and touch the clouds," said Josh Kirschner, another employee.

At 8 p.m., the grocery store was closed early and waiting on a generator to get the fridges back up and running.

Residents of the closed off streets were sent to the local arena and the high school, said Chris Bischof of Simcoe paramedic services.

Mr. Bischof said there are only minor injuries, but the damage to the homes is extensive.

"A lot of work will have to be done."

Earlier in the day, lightning hit four men at a golf club in Stouffville, Ont.

Peter Epstein, a 52-year-old Toronto realtor who was at Bethesda Grange Golf Course for an afternoon tournament, was under the patio at the clubhouse when he heard a bang, then a frantic cry to call 911. Golfers said that a few minutes earlier, they heard horns indicating they should go indoors.

A former ski patroller and salesman of defibrillators and cardiac monitors, Mr. Epstein went to help an ICU nurse attend to three victims struck near the 18th hole of the golf course.

"You see three guys on the ground. Chances are, they're either in shock or they've been struck by lightning. So then you've got to figure out what's going on with their health."

Mr. Epstein said one of the victims was not breathing and did not have a pulse. "His eyes were wide open and completely glazed over," he said. The ICU nurse performed CPR and was able to revive him.

Four men aged 51, 53, 56 and 60 were taken to local hospitals. One is in critical condition and the other three are stable, said York Regional Police, who responded to a call from the golf club in the late morning.

"Out of the corner of my eye, I saw a lightning bolt come down and hit behind the clubhouse here, and it just shook," said Karl Benz, who had just parked his golf cart at the clubhouse.

Mr. Benz was at the golf club for an 8:30 a.m. tee-off, and he and a few other golfers had finished about 13 holes before hearing the horns and heading indoors.

"They came out to warn us even before that to say if you hear a horn, get off the course," said Rick Adams, who was playing with Mr. Benz at the golf club and helped lift two victims into trucks to be taken indoors.

"They were conscious, but the more serious one was hurting. Hopefully he makes it," he said. "The real hero is the ICU nurse that performed CPR on him, because he wasn't breathing at the time."

By early afternoon, the rain and lightning had cleared, but the charity golf tournament Mr. Epstein and other realtors were attending was postponed.

Asha Singh, a realtor who drove in for the tournament from Mississauga, Ont., with her husband, was told of the lightning injuries after arriving at noon. Ms. Singh said she saw from her car what appeared to be "two straight lines of bright light that were coming down."

"We knew our tournament was at 1 p.m., so our people would not have been on the golf course. But that was the part that was the most scary is just driving in here to think someone you know could have been hit," Ms. Singh said. 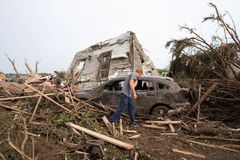 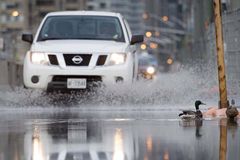