Statistics Canada will once again start collecting and publishing data on unfounded criminal cases after a Globe and Mail investigation revealed one out of every five sexual assault allegations goes undocumented because police have dismissed the reports as baseless.

The agency expects the first results will be available by July, 2018. At that point, it will have been 15 years since Statscan stopped publishing unfounded numbers over concerns that police either were not always using the code correctly – the unfounded designation means no crime occurred or was attempted – or were not reporting the cases to the agency at all.

On Wednesday, Statscan will announce it has developed a standardized process with the help of the Canadian Association of Chiefs of Police that will address the previous data-quality concerns.

Unfounded: How police and politicians have responded to The Globe's investigation so far

"The collaboration between Statistics Canada and its policing partners is an important first step in restoring public confidence that data on unfounded criminal incidents, including sexual assaults, will be collected and recorded in a consistent manner," Navdeep Bains, the Minister of Innovation, Science and Economic Development, which is responsible for the statistics agency, although Statscan itself is arms-length from government, said in a release obtained by The Globe. 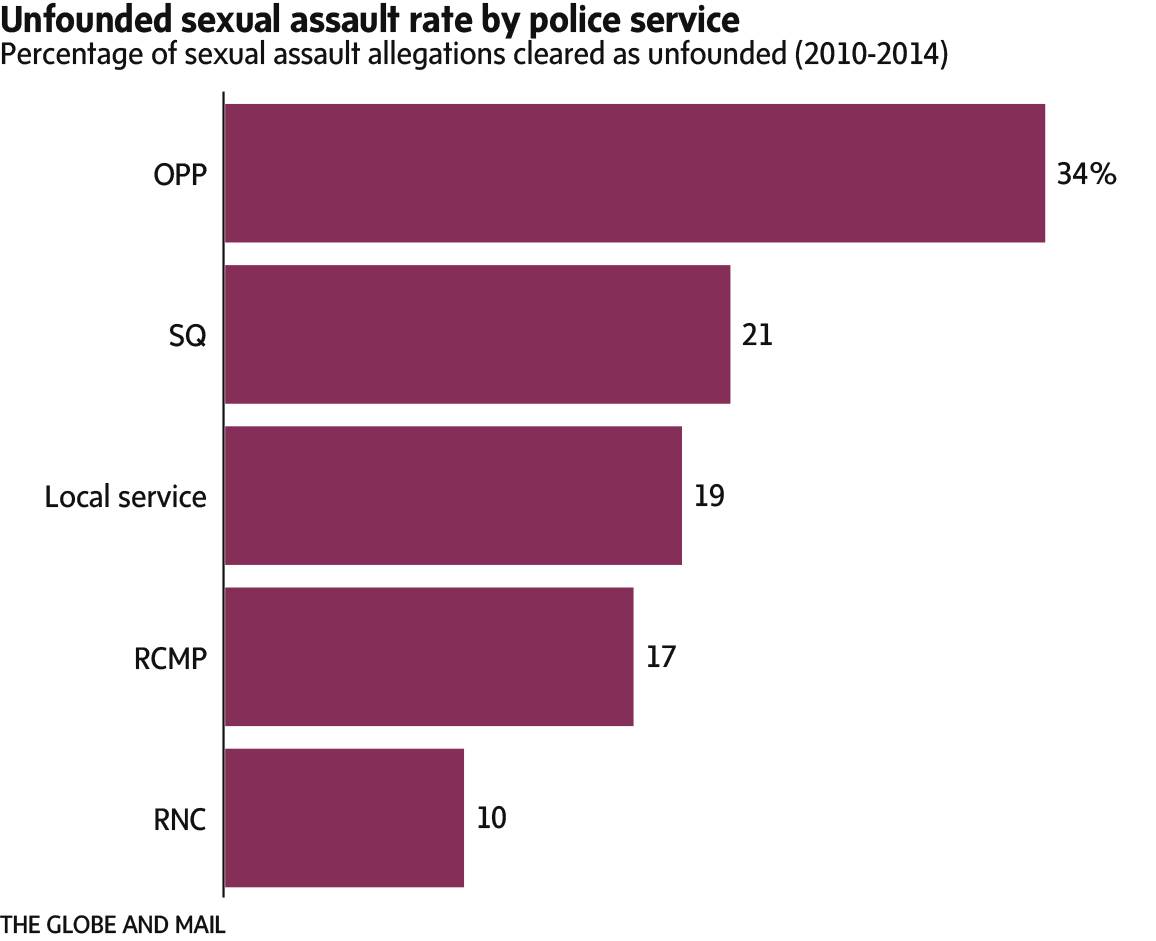 Also as part of the Wednesday announcement, The Department of Justice will pledge nearly $100,000 to the National Judicial Institute to develop gender-based violence training – including around sexual assault – for federally and provincially appointed judges.

In March, the Liberal government committed more than $100-million over five years to create a national strategy to prevent gender-based violence, citing The Globe's Unfounded series.

As part of a 20-month investigation, The Globe obtained unfounded statistics for both sexual and physical assault from 873 police jurisdictions over a five-year period ending in 2014.

The results showed that on average, sexual-assault complaints were nearly twice as likely to be dismissed as unfounded compared with regular assault.

The Globe's data revealed that sexual assault rates varied dramatically across the country, with some cities posting unfounded rates that top 50 per cent. In total, 115 communities were classifying at least one-third of sex-assault complaints as unfounded.

Once an investigation is closed in this way, it essentially disappears from the public record. Unfounded cases are not reflected in local or national statistics, and it has been that way since 2003, the last year Statscan made unfounded data available. The agency continued to collect – but not release – the figures until 2006, when the Police Information and Statistics (POLIS) committee, a subcommittee of the Canadian Association of Chiefs of Police, recommended that practice stop as well.

After The Globe's investigation, CACP president Mario Harel announced he had asked the POLIS committee to "examine how statistics are recorded and reported to Statistics Canada and make recommendations on how reliable and consistent statistical information may best be collected."

Researcher Linda Light, who was one of the most vocal critics of Statscan's decision to stop publishing unfounded data, said she was thrilled to learn the agency had reconsidered.

In 2006, Ms. Light and Gisela Ruebsaat were in the final stages of releasing a groundbreaking study of unfounded sexual assault cases, which had been funded in part by the federal Department of Justice and the British Columbia ministries of community services and public safety.

The pair was given access to full police files from four British Columbia police jurisdictions to help them try to identify commonalities among cases that wound up unfounded and ones that did not.

After reviewing 148 cases from 2002 and 2003, the researchers uncovered evidence to suggest the closer a complainant conformed to the debunked stereotypes about how true victims behave, the more likely it was the case would be deemed "founded," meaning the officer believed a crime had occurred. In files where it was noted that the complainant fought back, said "no," did not know the suspect, appeared visibly upset when discussing the incident, and did not present any mental health issues (including alcohol or drug abuse), the odds were higher that the case did not end up in the unfounded pile.

The study is one of the most comprehensive and often-cited reports on unfounded cases in the country – but it was actually never published. A short summary of the findings was included in a Justice Department publication in 2007, but Ms. Light says around the time the report was to be released, Stephen Harper became prime minister and the publication was cancelled for reasons that were never fully explained.

It was also then that Ms. Light learned Statscan was going to stop collecting the data.

"I'm sorry that it took 10 years for it to [resume]. We were saying these same things 10 years ago and no one was listening. … We were screaming as loud as we were able to," Ms. Light said.

"I don't even like to think if the issue had got the attention it needed 10 years ago and more research might have built on the research we did, who knows what might have happened? … But better late than never."

The problem with consent: Sex-assault cases and intoxication
March 17, 2017
What it's like to report a sexual assault: 36 people share their stories
March 17, 2017
North Bay knew it had a problem, and no resources to fix it
February 10, 2017
Follow Robyn Doolittle on Twitter @robyndoolittle
Report an error Editorial code of conduct
Due to technical reasons, we have temporarily removed commenting from our articles. We hope to have this fixed soon. Thank you for your patience. If you are looking to give feedback on our new site, please send it along to feedback@globeandmail.com. If you want to write a letter to the editor, please forward to letters@globeandmail.com.
Comments