Grief has become commonplace at Queen's University, where six students have died - two in the past week alone - in just over a year. The struggle to reconcile the nature of something so tragic, including at least two suicides, has touched off soul-searching among students and faculty and prompted their leadership to acknowledge that something must be done.

"I don't think we've been nearly open enough about it and talk about it," principal Daniel Woolf said. "If there's anything good to come out of this, it will be to put mental health at the forefront and take it out of the shadows."

The university's administration is taking steps to help the community cope, attempting to address the most confounding of questions: Why Queen's? Why now?

There are no easy answers, but students have begun exploring them in their own way.

Thursday, the second-last day of the school year, saw a student-led response to the tragedies dubbed "Queen's Loves U," which grew out of a Facebook page started by Kevin Imrie, a third-year political science student. Organized outside of the official aegis of the university, the event featured tables where people could write open letters to the school community. "It's really hard to figure out how to help or what to do about it, and that's where my frustration comes from," Mr. Imrie said.

Just days ago, students gathered in a vaulted hall to pay tribute to Andrew Lloyd, 20, a third-year undergrad found dead at his home near campus last week - a presumed suicide - hours after news emerged that engineering student Kyle Kinsella had died from complications relating to diabetes.

It was a solemn coda to a year that began with the accidental deaths of Cameron Bruce, 18, who felt out a dorm window, and Habib Khan, 19, who fell through a library skylight. The community also struggled with the suicide of 18-year-old Jack Windeler in March of last year and the death of 21-year-old Robert Nason in February.

"Even if you don't know them, it's hard," said Caillie Turcotte, a first-year drama student. "You have this weight on your shoulders, like - who's next?"

The small and concentrated campus provides the illusion of shelter from such harsh realities. For eight months of the year, the limestone buildings housing libraries, laboratories and coffee shops teem with nearly 24,000 students. In a city of 150,000 people, the students form a nearly self-contained ecosystem on the shores of Lake Ontario.

But when tragedy strikes, the whole community feels it. "There's no anonymity at Queen's," said Brian Yealland, the school's chaplain. "People are known to each other. Any loss affects the student mood and the student body. It has made them feel more sad, more fragile."

Students have stopped in the hallways and visited Mr. Yealland's office to talk about the deaths. Some argue that Queen's must put more resources into mental-health programs. They say it can take weeks to see a counsellor and that there's often nowhere to turn for help coping with academic and peer pressures and the stress of being away from home.

The university, however, says it is improving. The administration is reviewing front-line services to make them more efficient, and is looking at giving graduate teaching assistants mental-health training so they can identify students who might need help and refer them to counsellors, said John Pierce, the dean of students.

The students' union, the Alma Mater Society, has seen a surge in demand for its peer support services this year and is looking at assigning counsellors to residence halls. They'll face no shortage of questions. "It puzzles me in a sense," said Alex Radu, a second-year commerce student. "Why is this happening and what is the cause of this? What changed?"

After Mr. Bruce's fatal fall in September, fellow students created a patch bearing the image of a bugle, his instrument, to adorn their jackets. And in the days following the two most recent tragedies, theatre student Peter Nielsen's class wrote a song to uplift students cramming for exams and performed it, flash-mob style, at 3 p.m. Tuesday in the library.

"We said, we need to put down the books, take time for ourselves, put our lives before the work, because unfortunately, there were those who weren't able to do that this year," Mr. Nielsen said. "[The song was]telling the population of Queen's that we are a group. Sometimes we feel overwhelmed or alone, but all the university students are here to support each other."

Editor's note: Kevim Imrie is a Queen's University student who started a Facebook page about the deaths of Queen's students. His surname was misspelled on Friday in print and online. This version has been corrected.

How a father's sorrow became the project of a lifetime
April 8, 2011 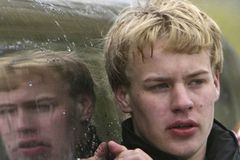 How Ivy League school Cornell dealt with a spate of suicides
April 8, 2011
Follow Adrian Morrow and Kate Hammer on Twitter @adrianmorrow @katiehammer
Report an error Editorial code of conduct
Due to technical reasons, we have temporarily removed commenting from our articles. We hope to have this fixed soon. Thank you for your patience. If you are looking to give feedback on our new site, please send it along to feedback@globeandmail.com. If you want to write a letter to the editor, please forward to letters@globeandmail.com.
Comments are closed