Keitha Robson spent six hours on Wednesday waiting for her daughter to contact her as the lockdown at the University of Ottawa trapped students and faculty in classrooms and offices for most of the day.

Ms. Robson's daughter, a third-year theatre arts student, was in an exam and without a phone when the university imposed the emergency shutdown and could not respond to her mom's texts and messages until 4 p.m. "We checked in with roommates, checked on her Facebook. At one point, we contemplated the eight-hour drive," said Ms. Robson, who lives in Timmins, Ont.

Hundreds of kilometres away, some students and faculty at the university say the administration could have been quicker to respond to the shooting on Parliament Hill and clearer about the dangers they continued to face in the afternoon. According to multiple accounts, the lockdown did not start until an hour after the shooting and some hungry and tired students then left classrooms before the order had been lifted.

Professor Timothy Lethbridge was teaching a class of 72 computer-science students when toward the end of the class some of the students said they received lockdown messages. The classroom doors locked automatically and Dr. Lethbridge and his students watched the university's emergency website for updates.

"There should be some severity levels. People were disobeying the orders. We watched buses running between the university and Parliament outside," Dr. Lethbridge said.

By the end of the lockdown, Dr. Lethbridge had persuaded only a handful of students to remain in the classroom with him.

Fourth-year political science student Nik Lust had a morning class and said classmates took the lockdown seriously. No one left his classroom.

"Every half-hour or so we got e-mails from the university," he said. Campus security came to his classroom at 2:30 p.m. and said they would sweep the building for any threats. "I don't know if the university policy was effective because no one knew anything until 11 a.m," Mr. Lust said.

The university said its emergency protocol was activated immediately and it kept in contact with Ottawa police all day. "As we always do after any incident, we will do a thorough assessment of our procedures and look at ways to make improvements," the statement said.

Many families in Timmins had a hard day, Ms. Robson said. Students from francophone families in the area go to the University of Ottawa because it is bilingual. "It's something you watch on TV and you assume it's not going to ever affect you. It's now a Canadian experience that one will not soon forget," she said.

Employees, customers spend hours in lockdown in Ottawa after shooting
May 12, 2018 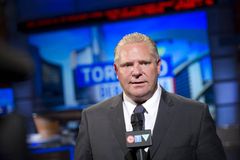 Provincial legislatures ramp up security following attack on Parliament
May 12, 2018 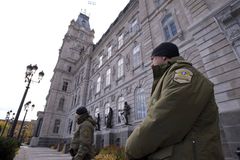