A northwestern Ontario First Nation plagued with mercury poisoning for more than 50 years said Tuesday it has evidence that toxic material is still leaking from an upstream paper mill.

A new report commissioned by the Grassy Narrows community and funded by the government of Ontario suggests there is ongoing mercury contamination from the Dryden, Ont., mill which was decommissioned decades ago.

The report, authored by five mercury experts and released Tuesday, lays out the results of tests conducted last summer on mud samples from the bottom of the Wabigoon River as it passes by the mill, as well as from two lakes upstream of the site.

He said that suggests the area is suffering from ongoing pollution rather than simply the aftermath of chemicals released in the 1960s.

The researchers recommend a thorough ground water study at the site to determine how and where mercury is leaching into the river, which they say could begin as early as this summer.

Chief Simon Fobister of Grassy Narrows called the results "deeply concerning," adding he hopes this latest study will help bring an end to the community's plight, which he said had long been ignored by previous governments.

"They thought the mercury would just wash itself away and that would be it," he said. "Sad to say that didn't happen."

Though the provincial government recently committed to cleaning up the site, Grassy Narrows residents are "still living with mercury poisoning and people are still suffering," he said.

Fobister said he has also asked Ottawa for help but has received no official response, though he stressed the cleanup would move forward "with or without the feds."

The community, near the Manitoba border, has dealt with mercury poisoning since the mill dumped 9,000 kilograms of the substance into the Wabigoon and English River systems during the 1960s.

But mercury concentrations haven't decreased in 30 years and dangerous levels are still present in sediment and fish, causing ongoing health and economic impacts in the community.

Researchers have previously reported that more than 90 per cent of the people in Grassy Narrows and the Wabaseemoong (White Dog) First Nation show signs of mercury poisoning.

Earlier this month, the Ontario government pledged to conduct expanded mercury testing around the site of the old paper mill.

The Ministry of the Environment had previously done geophysical testing near the mill after a former mill worker came forward last year saying he had buried more than 50 barrels of mercury and salt in a pit in 1972. Officials found no barrels, but decided to test the entire mill site after an environmental group announced it had found high levels of mercury in soil samples.

On Tuesday, the ministry said it was committed to dealing with the situation.

"Mercury contamination has had a profound impact on the people of Grassy Narrows First Nation and Wabaseemoong Independent Nations, and has to be properly addressed," it said in a statement.

"We are completely committed to working with all partners to identify all potentially contaminated sites, and to creating and implementing a comprehensive remediation action plan for the English Wabigoon River."

Brian Branfireun, a mercury expert at the University of Western Ontario who didn't participate in the study, said there could be several options to clean up the site once researchers figure out the source of the leak.

If the mercury is seeping in through groundwater, the next step could be pump-and-treat remediation, in which tainted water is captured in wells before it can reach the river and sent for treatment, he said.

If the source is old sediment eroding from near the mill site, then the removal of that contaminated sediment could be the solution, he said. 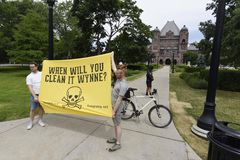