There will be a super blue blood moon on Wednesday and a total lunar eclipse, events that by themselves are not uncommon but combined they make for a spectacular night for skywatchers in Western Canada.

On the West Coast, the skies will feature the fantastic lunar show as the gravitational forces of the sun and moon churn up the strongest tides of the year, known as king or spring tides.

"I'm looking to put on my star gazing hat and if it's a nice, calm evening I'd encourage everybody to go out and have a look at the super moon," said oceanographer Richard Dewey, associate director of science services at the University of Victoria's Ocean Networks Canada.

"It's one of these things that we need to know that we're just part of a big solar system and the moon is out there as our best partner."

A blue moon is a full moon that comes twice in the same month. During a lunar eclipse, when the moon passes into the earth's shadow, the moon often turns red, prompting the moniker blood moon. The super moon appears larger because it's six per cent closer to the earth and 14 per cent brighter.

Dewey, an expert in coastal flows, tides, waves and turbulence, said the beauty and power of the moon and sea will be on full display.

"We've got tide gauges out with Ocean Networks Canada and pressure gauges and we'll be watching to see that, yes, we're seeing some of the largest tides of the year," said Dewey, who has conducted research from Japan to California and along the British Columbia, Alaska and Arctic coasts.

Ocean Networks said its Coastbuster app, originally developed to track marine debris on B.C. shores from the March 2011 tsunami in Japan, can be used to report and comment on tidal activity, including the king tide.

"The moon is a little bit closer, so it appears a little bit bigger," said Dewey. "It's also aligned with the sun, so there could be places where the moon is just reaching into the earth's shadow, so you'll get a lunar eclipse. It's going to be a little bit of an extraordinary sight."

On its website NASA says a lunar eclipse can only happen on the night of a full moon. It only occurs when the sun, earth and moon are aligned and the moon passes behind the earth.

If you live in North America, Alaska or Hawaii, the eclipse will be visible before sunrise on Wednesday, the U.S. space agency says.

"As an oceanographer, the super moons and the spring tides or king tides are always an interesting time when the tidal forces of the ocean are at their maximum," Dewey said.

He said the king tides are a combination of the gravitational effects of both the sun and the moon on the earth and its oceans.

"When the sun and the moon are aligned at either a new moon or a full moon their forces are pulling together and we end up with very large tides," Dewey said.

The tides only rise about six centimetres higher than normal, Dewey said, but if weather conditions are stormy and windy, the tides can produce waves that breach dikes and breakwaters and cause flooding.

"This is what we often worry about in December and January is a large spring tide or king tide at the same time as we get a big storm coming through." 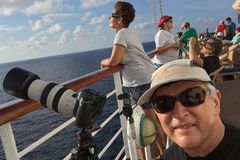 The solar eclipse: everything you need to know
July 30, 2017