Canadians in at least two cities are joining others around the world in demanding the release of three journalists who are being held on terrorism charges in Egypt, including Canadian Mohamed Fahmy.

Al Jazeera, the Qatar-based television network that employed the three men, has organized a global day of action with protests taking place in more than 25 cities.

Here in Canada, Canadian Journalists for Free Expression (CJFE) and Al Jazeera's English staff are holding a demonstration in Toronto at Nathan Phillips Square at noon ET. In Montreal, a similar event has been arranged by Canadians for Justice and Peace in the Middle East (CJPME) outside of the Egyptian consulate.

Patricia Jean, a spokeswoman for CJMPE, said her group is deeply concerned about freedom of expression in Egypt and, in this case, the fact that Mr. Fahmy is Canadian has elevated the fight for his freedom to the top of its agenda. "Here you have a journalist who is being detained on false accusations," said Ms. Jean.

Tom Henheffer, the executive director of the CJFE, said the fact that Egypt is labelling journalists as terrorists for carrying out their work is a huge threat to that country's fledgling democracy.

"On top of that, Canadians need to care because Mohamed Fahmy is a Canadian citizen and there just has not been the groundswell of support for him that there has been in previous cases" of Canadians detained in Egypt, said Mr. Henheffer.

Although the federal Conservative government has provided consular services to Mr. Fahmy and has told the Egyptians that it expects Mr. Fahmy will be given a fair trial, Canada has not joined journalist groups and world leaders, including U.S. President Barack Obama and representatives of the United Nations, in calling for his release.

Mr. Fahmy, who came to Canada with his family about 20 years ago, is a citizen of both Canada and Egypt.

But "that should play into it, other than the fact that it might make the diplomacy a little more complicated," said Mr. Henheffer. "Once you are a Canadian citizen, you are a full citizen. Full stop. And that's why we are holding this protest – to get Canadians to call for his release and to raise awareness."

Mr. Fahmy, the Cairo bureau chief for Al Jazeera's English-language network, was seized along with Australian reporter Peter Greste and Egyptian producer Baher Mohamed, from their upscale hotel room in Cairo on Dec. 29 and charged with conspiring with the banned Muslim Brotherhood to tarnish Egypt's international reputation.

They appeared in court for the first time last week and were denied bail. Their case has been adjourned until March 5. During their hearing, they shouted from the defendants' cage that their imprisonment is "psychologically unbearable."

The trial is seen as a test case for Egypt's treatment of journalists, both foreign and national. And the charges have been denounced by journalists around the world.

A Facebook page created in support of the three men records some of the demonstrations taking place in countries as diverse as Kenya and Malaysia.

Here in Canada, prominent journalists have created a video urging Canadians to take part in the Global Day of Action.

It includes a video statement from Lyse Doucet, a Canadian who is a correspondent for the BBC and who is personally acquainted with both Mr. Fahmy and Mr. Greste. Mr. Fahmy, she says, is a "committed, connected" journalist.

In the video, CBC anchorman Peter Mansbridge says: "Clearly in this situation, we are seeing solid, award-winning journalists who weren't allowed to do their job. So now we have, instead of people telling a story that the world wants to hear, we have people sitting in jail."

Globe and Mail editor-in-chief John Stackhouse says the detention of the three men is both disturbing and unsettling. "And perhaps that's what some of the authorities want," said Mr. Stackhouse. "They want a chill among journalists, both Egyptian journalists and foreign journalists. That's unfortunate, even tragic, for Egypt and it's not something that the world should stand by and watch idly." 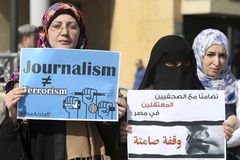 Opinion
Why the silence over Mohamed Fahmy?
February 17, 2014