The need to deter Canadians from driving while drunk means judges do not have to be lenient when sentencing young people or those with no criminal record, the Supreme Court of Canada ruled on Thursday in restoring a 6 1/2-year sentence given to an 18-year-old impaired driver who caused the death of his two young passengers while speeding.

The case of Tommy Lacasse came to symbolize the notion that courts are out of touch with public sentiment after the Quebec Court of Appeal reduced the original sentence to four years, a ruling that Quebec's Attorney-General denounced. The Supreme Court, in a 5-2 decision, said appeal courts should be reluctant to overturn trial judges' sentences unless they are out of proportion to the seriousness of the offence and the individual's responsibility for that offence. Drunk driving causes more deaths and serious injuries than any other crime, the court said.

The ruling comes in time for a holiday season in which the issue of impaired driving takes on greater prominence. The Supreme Court decision could affect high-profile cases such as two in Ontario this fall – one in which a wealthy 29-year-old is accused of ignoring a stop sign while impaired and causing four deaths, and one in which a 24-year-old driver is accused of taking the life of a freshman university student walking home on the sidewalk from a gym.

It also comes from a Supreme Court that became known for standing up to former prime minister Stephen Harper, softening or striking down tough crime laws meant to increase sentences and reduce judges' discretion. In this case, the majority supported a trial judge's right to use his discretion to send a tough message.

"The majority is saying: Trial judges must have discretion to send a denunciatory message with their sentencing decisions in order to adequately reflect a community's outrage," said Nader Hasan, a Toronto lawyer not directly involved in the case, who co-wrote a book on sentencing that the dissenting judges cited.

Those two judges, Clément Gascon of Quebec and Chief Justice Beverley McLachlin, stressed the principle of restraint (the "lightest possible sanction in the circumstances") in sentencing.

"A person cannot be made to suffer a disproportionate punishment simply to send a message to discourage others from offending," Justice Gascon wrote in a strongly argued dissent, signalling that he could surprise Canadians by becoming a liberal voice on the court in criminal matters. Mr. Harper appointed the business-law expert in June, 2014, after the Supreme Court ruled that his first choice, outspoken conservative Marc Nadon, was ineligible.

Quebec Court Judge Hubert Couture had said that, in the Beauce region south of Quebec City in which the fatal accident occurred, sending a strong message was especially important because many people tended to trivialize the crime of drunk driving.

In June, 2011, Mr. Lacasse, whose backseat passengers were 18 and 17, took a curve on a country road at 130 kilometres an hour, and the car skidded 60 metres into a ditch, and flipped over several times. He pleaded guilty to impaired driving causing two deaths. He had consumed several beers, a vodka-lemonade mix and a joint that evening. The appeal court said Justice Couture had not taken into account Mr. Lacasse's remorse or potential for rehabilitation. There was evidence he was suicidal after the crash.

But the Supreme Court's majority supported the trial judge's right to consider local conditions, and stressed the need to protect young people from drunk drivers who may also be young.

"Although an offender's youth is often an important mitigating factor to consider, it should be noted that it is young people who are affected the most by motor vehicle accidents that result from impaired driving," Justice Richard Wagner of Quebec wrote, joined by justices Suzanne Côté, also of Quebec, Rosalie Abella, Michael Moldaver and Andromache Karakatsanis. 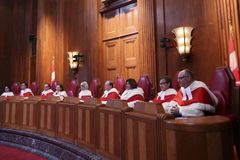