The defence in the high-profile trial over the 2011 death of an Indigenous woman has asked the Supreme Court of Canada to preserve a lower court's acquittal, marking the latest development in a case that raises questions about consent, rape myths and the justice system's treatment of Indigenous women.

In June, Alberta's Court of Appeal overturned Bradley Barton's 2015 acquittal of first-degree murder and the lesser charge of manslaughter in the death of Cindy Gladue, a 36-year-old Edmonton mother of three. The lengthy decision contained sweeping language that could have serious implications for jury trials and sexual-assault proceedings. A new trial was ordered, and is slated for February of 2019.

Earlier this week, defence lawyer Dino Bottos filed an application requesting that the country's highest court hear an appeal and let the original verdict stand. The 31-page document states that the provincial Court of Appeal demonstrated "an alarming disregard for critical components of the adversarial and appellate processes."

The filing states, for example, that the Court of Appeal was "unconcerned" that three of the Crown's four grounds for appeal directly contradicted positions it took at trial. Ms. Gladue bled to death in a motel bathtub following a paid sexual encounter with Mr. Barton, an Ontario trucker. The murder trial turned on what caused a fatal 11-centimetre-long wound to Ms. Gladue's vaginal wall, with the Crown arguing Mr. Barton either inserted a sharp object or recklessly fisted her while she was intoxicated, and the defence asserting the trauma was caused by consensual, manual stimulation similar to what Mr. Barton had done to Ms. Gladue less than two days earlier. No weapon was found.

In an unprecedented move regarded by many as an affront to Ms. Gladue's dignity, the trial judge allowed the Métis woman's vaginal tissue to be brought into court as evidence. The case sparked rallies across the country at a time when the federal government was facing immense pressure to launch a national inquiry into Canada's missing and murdered Indigenous women.

Reached at her home in Edmonton, Ms. Gladue's mother said she was upset to learn that the Supreme Court might hear the appeal and that Mr. Barton may not be tried anew after all. "It's been very difficult," Donna McLeod said, noting her daughter would have turned 43 in July. "It's been going on for so long."

Among other grounds for appeal, the defence asserts in its Supreme Court filing that: the Alberta appellate court bolstered the Crown's case by improperly adding its own grounds for appeal; the provincial appellate court was overly critical of the judge's instructions to the jury before deliberation, much to the benefit of the Crown; and that the June decision conflicts with established case law regarding consent.

The Supreme Court application, filed on Tuesday, also states that the Crown is now advancing new theories that conflict with its positions at trial, including its assertion that there should have been a closed-door hearing on the admissibility of Ms. Gladue's sexual history. The Crown did not object to the absence of such a hearing during the trial and, in its own opening remarks, called Ms. Gladue a "prostitute" and referred to her "working relationship" with Mr. Barton.

"The logical implication is that the Crown has free rein to appeal an acquittal on grounds that expressly conflict with positions it took at trial," states the defence's application for leave to appeal. "This conclusion contradicts with pronouncements from this Court stressing the importance of protecting the right against double jeopardy."

In its June decision, Alberta's Court of Appeal said a closed-door hearing on the admissibility of Ms. Gladue's sexual history was mandatory under the Criminal Code. The appellate justices acknowledged that the Crown should have raised this issue at trial, but said the ultimate responsibility lies with the trial judge to guard against the admission of irrelevant evidence that could mislead the jury.

The Alberta Crown Prosecution Service has 30 days to file its response to the defence's request for an appeal. An Alberta Justice spokesman declined to comment on the merits of the appeal, saying the matter remains before the court.

In an interview Wednesday, Mr. Bottos said he anticipates that the Supreme Court will decide in early 2018 whether it will hear the appeal. 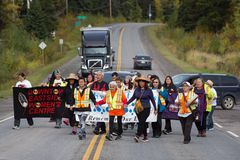