Canadian adults in grievous, unending pain have a right to end their life with a doctor's help, the Supreme Court ruled on Friday.

The unanimous ruling, by establishing that the "sanctity of life" also includes the "passage into death," extends constitutional rights into a new realm. The courts have used the 1982 Charter of Rights to establish gay marriage and to strike down a federal abortion law. The new ruling will change the way some Canadians are permitted to die.

In a brief, powerful opening paragraph, the court explained why it was creating a new constitutional right to autonomy over one's death in some circumstances: Those who are severely and irremediably suffering, whether physically or psychologically, "may be condemned to a life of severe and intolerable suffering" by the government's absolute ban on assisted dying. "A person facing this prospect has two options: she can take her own life prematurely, often by violent or dangerous means, or she can suffer until she dies from natural causes. The choice is cruel."

The decision was signed by The Court, which happens occasionally when the justices wish to lend their decisions extra weight. The nine judges, who range in age from mid-50s to 74, dismissed the notion that competent adults cannot consent to their death. "We do not agree that the existential formulation of the right to life requires an absolute prohibition on assistance in dying, or that individuals cannot 'waive' their right to life. This would create a 'duty to live,'" the ruling says.

The court decision puts Canada in the company of a small group of countries such as Belgium – and U.S. states Washington and Oregon – that permit doctor-assisted death. And it gives the Conservative government difficult choices as it heads toward an election expected in the fall. The court suspended its ruling for 12 months to allow for new rules and laws to be drafted, but Ottawa could choose to do nothing, and allow provinces and medical regulatory bodies to create the ground rules for assisted death. Or it could do what it did when the Supreme Court struck down prostitution laws 14 months ago: study international models and then create a uniquely Canadian version that may or may not respect the principles established by the court.

Justice Minister Peter MacKay did not directly express concern about the court's decision, as he did immediately after the prostitution ruling. But heleft the government's options open, and did not promise to respect the court's ruling. "This is a sensitive issue for many Canadians, with deeply held beliefs on both sides. We will study the decision and ensure all perspectives on this difficult issue are heard," he said in a prepared statement.

Some advocates of disabled people condemned the ruling. Because it is not restricted to the terminally ill, but to a broader group who have a "grievous and irremediable medical condition," it means "all persons with a serious disability in Canada can access assisted suicide," the Council of Canadians with Disabilities and the Canadian Association for Community Living said in a joint statement.

"This degree of permissiveness does not exist anywhere else in the world."

Gerald Chipeur, an Alberta lawyer who represented the Christian Legal Fellowship in opposing assisted death, said governments should create a system in which patients who fit the court's criteria and wish to die would apply to a judge for a warrant, that they would then take to a doctor, thus exempting the doctor from criminal responsibility.

Jocelyn Downie, a Dalhousie University professor of law and medicine, said she would like to see an oversight body created – perhaps a Canadian commission on assisted dying – so a new system can earn the public's trust.

The court overturned its own 5-4 ruling from 22 years ago in which it rejected a right to assisted suicide claimed by Sue Rodriguez, 42, who suffered from amyotrophic lateral sclerosis. In that case, Justice John Sopinka, writing for the majority, said Parliament needed flexibility to protect the vulnerable and respect Canadians' views on the sanctity of life. Picking up on those arguments, the Canadian government contended in this case that a blanket prohibition on assisted death was necessary because of the difficulty in knowing beforehand who was vulnerable to being mistreated or undervalued by the health system or family members, and thus pushed toward an unwanted death.

But over and over,the court fell back on the factual findings of the trial judge, Justice Lynn Smith of the B.C. Supreme Court, who conducted extensive hearings on legal developments in other jurisdictions since the Rodriguez case. Justice Smith, a former law dean at the University of British Columbia, found that the systems worked to protect vulnerable people from unwanted death.

The court did not strike down the Criminal Code's prohibitions on assisted suicide, but said they no longer apply "to the extent that they prohibit physician-assisted death for a competent adult person who (1) clearly consents to the termination of life and (2) has a grievous and irremediable medical condition (including an illness, disease or disability) that causes enduring suffering that is intolerable to the individual in the circumstances of his or her condition."

Madeleine Meilleur, the Attorney-General of Ontario, said she would "love" to see Ottawa take the lead in crafting new legislation governing assisted dying. "I think it would show leadership," she said. If Ottawa declines to pass a law or set national guidelines for what is essentially a new medical service, the provinces, which oversee health care, could enact their own laws on doctor-assisted dying. Ms. Meilleur said it was "too early" to say what Ontario will do next.

The case involved two women, both now dead. Kathleen Carter, 89, suffered from a degenerative disease, spinal stenosis, that left her lying "flat as an ironing board," in her own words, and unable even to read a newspaper; her daughter, Lee Carter, took her to Switzerland for an assisted death in 2010. Gloria Taylor, like Ms. Rodriguez in 1993, suffered from amyotrophic lateral sclerosis, and died of an infection in late 2012.

Lee Carter, holding a pink bouquet of daisies in honour of her mother's favourite colour, said in an interview after the ruling that Canadians now "have a choice to die with dignity in our own country, surrounded by friends and family." 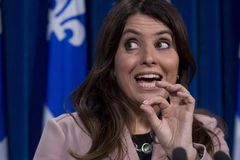 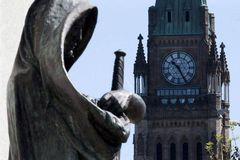