Six survivors of the Ebola outbreak in Nigeria spoke to Canadian doctor Eilish Cleary about what it took to beat the notoriously lethal virus. In detailed, videotaped interviews, they described their struggle to drink as much as six litres per day of water with oral rehydration solution to prevent dehydration and the other complications of Ebola.

The Nigerians had advantages over most patients in Sierra Leone, Liberia and Guinea. Four are doctors, one is a nurse and another is the fiancée of a nurse who died of Ebola. All were monitoring themselves for symptoms after the death of Patrick Sawyer, the Liberian-American diplomat who brought the virus to First Consultant Hospital in Lagos in late July and infected his caretakers.

"These people were identified early. They were isolated early. And they were treated early. They had fluids pushed early," Dr. Cleary, New Brunswick's chief medical officer of health, said in an interview from Ireland after her stint in Nigeria ended. She travelled to Nigeria to help with epidemiological work to control the outbreak there.

Dr. Cleary shared videos and transcripts of her interviews with six survivors. Here are four of their stories: 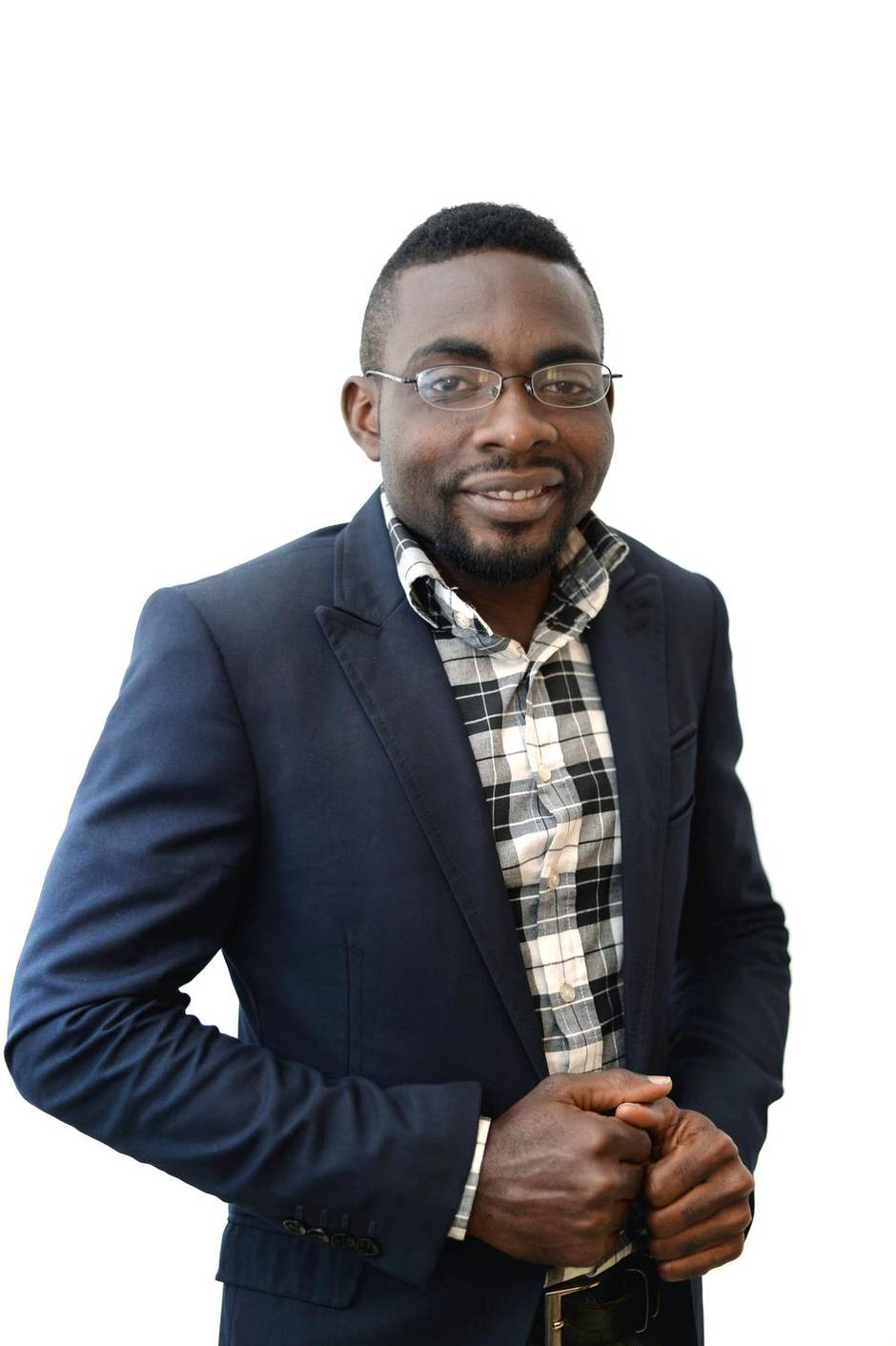 Mr. Akagha, 32, was working as a marketer with an oil and gas company when he contracted Ebola while caring for his sick fiancée, Justina Ejelonu, a nurse who treated Patrick Sawyer, the Liberian-American diplomat who seeded the Ebola outbreak in Nigeria.

Mr. Sawyer arrived on Ms. Ejelonu’s first day on the job at First Consultant Hospital, a private medical centre in Lagos, Nigeria’s largest city. The 30-year-old nurse was particularly vulnerable to the virus because she was pregnant when Mr. Sawyer came to the hospital in late July.

Ms. Ejelonu wore gloves while caring for Mr. Sawyer, but 14 days after her first contact with him, “she broke down, she started stooling, she started having diarrhea, and she started bleeding. On the way, she lost the baby,” Mr. Akagha recalled in his interview with Dr. Cleary.

Mr. Akagha carried his fiancée into a taxi and took her to an isolation centre, where he donned personal protective equipment and cared for her himself, comforting her, cleaning up her vomit and changing her diapers.

After his fiancée’s death, Mr. Akagha was taken to the isolation ward, where tests confirmed he had Ebola. Mr. Akagha downed two 1 1/2-litre bottles of oral rehydration solution per day for two days, a heavy fluid intake that seemed to help ward off the worst symptoms of the disease.

“The earlier you get supportive therapy, it increases your chance of survival,” he told Dr. Cleary. “That is the first step.” 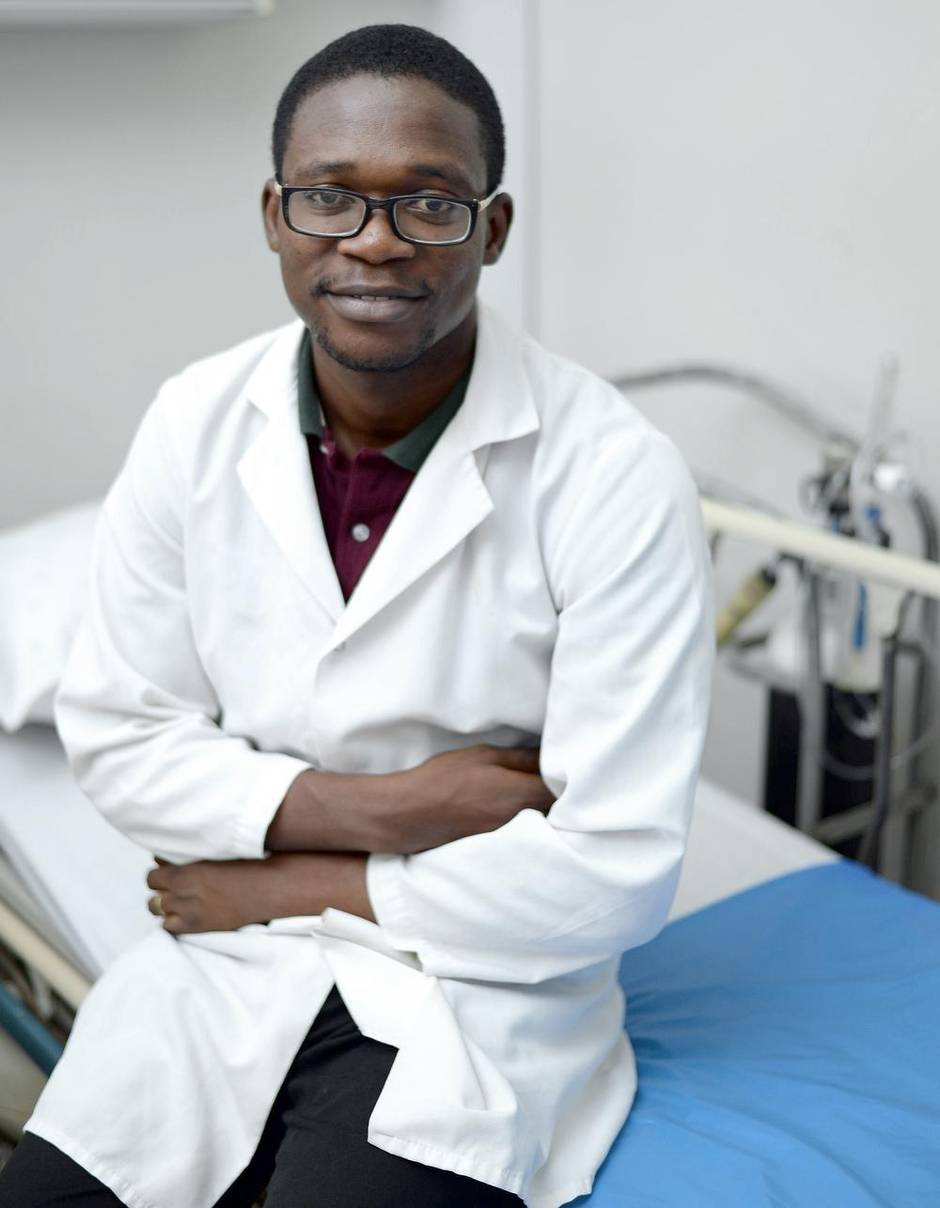 When Mr. Sawyer was rushed to First Consultant Hospital on July 20, it was Dr. Ibeawuchi, 31, who treated the patient and drew his blood for tests. “[Mr. Sawyer] vomited. He even pulled his IV line. His blood was everywhere I think. In fact, the whole room was contaminated,” Dr. Ibeawuchi recalled in his interview with Dr. Cleary.

Once tests confirmed Mr. Sawyer had had Ebola, Dr. Ibeawuchi isolated himself at home. When his temperature began to rise on his 12th night at home, he clung to the hope he might have malaria, whose symptoms can mimic the early stages of Ebola. “I was in denial,” he said. “It took me a long time to just accept that I actually had Ebola.”

Four days later, Dr. Ibeawuchi was picked up and taken to the isolation centre. That night, his condition worsened dramatically, with diarrhea and vomiting so intense it left him gasping for air. A doctor tried and failed to insert an intravenous fluid line, a procedure that can be difficult to perform on Ebola patients whose veins have begun to collapse because of dehydration and sodium depletion.

The doctor never managed to set an IV; Dr. Ibeawuchi relied on ORS to stay hydrated instead. But, in his interview, he emphasized how daunting it is for a weak, nauseated patient to find the will to drink. “When someone is down with Ebola … oral fluid is not easy. Do you understand?” 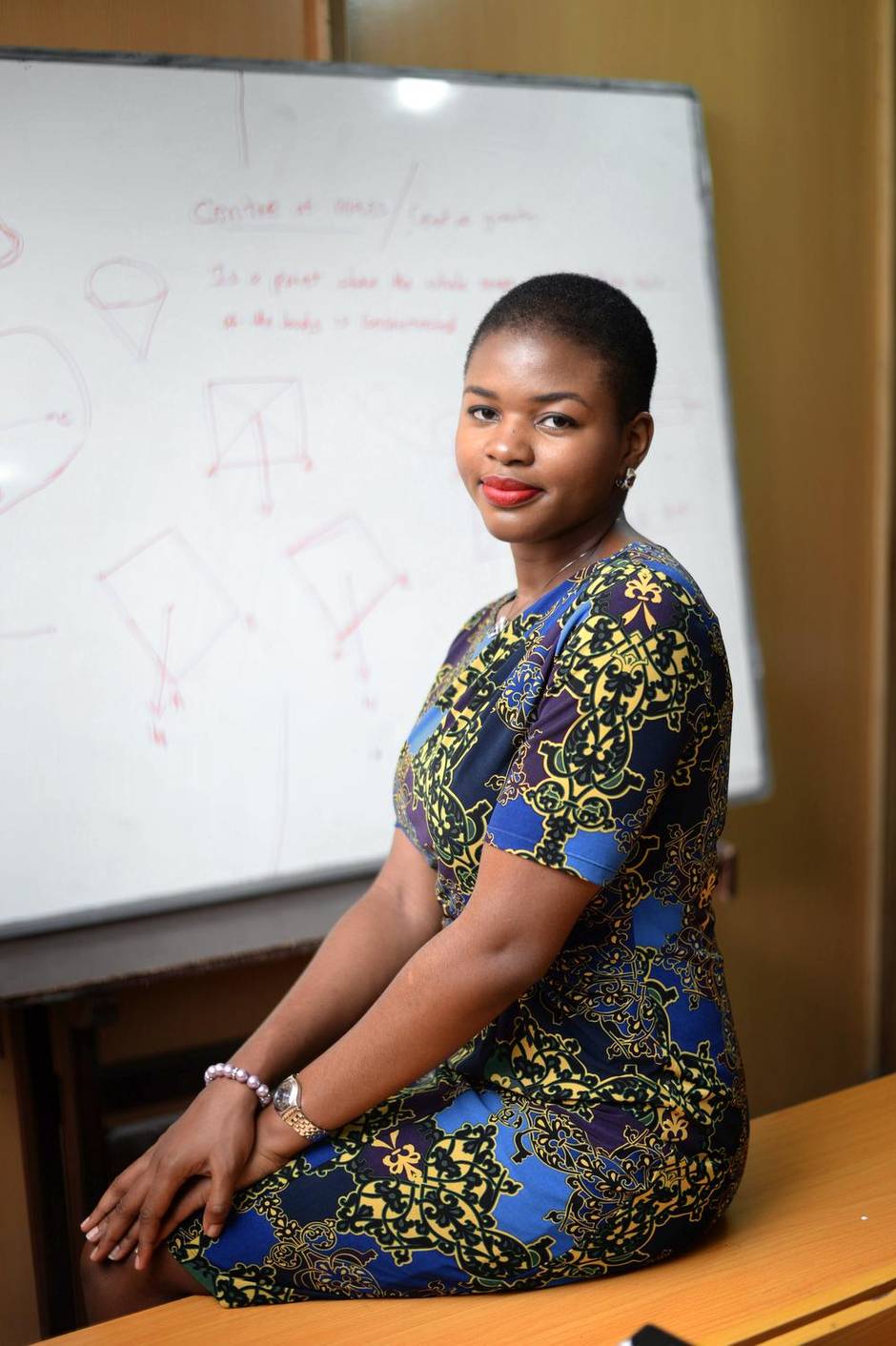 Dr. Igonoh, 28, believes she contracted Ebola when she picked up Mr. Sawyer’s IV bag with her bare hand. Early on, the hospital treated Mr. Sawyer’s symptoms as malaria because he told staff he had not had contact with Ebola patients in Liberia. Dr. Igonoh was wearing full protective gear when she pronounced Mr. Sawyer dead on July 25.

“The anxiety started the day he died,” she told Dr. Cleary. “For that period I felt a sense of panic and a fear of the unknown. How much did I touch him? How much risk am I at?” Five days later she began to feel ill, with joint pain, a sore throat and then the telltale fever.

As soon as the vomiting and diarrhea started, Dr. Igonoh sent someone to buy orange-flavoured ORS, dumped two satchels of the powder into a litre of water and began to guzzle as much as she could, even before she arrived at the isolation centre.

Dr. Igonoh continued to down as many as five litres of the solution a day, despite weakness and joint pain that left her barely able to lift the buckets of water she used to flush her own toilet at the isolation centre. She surfed the Internet on her phone and iPad, seeking guidance from others who beat Ebola.

Now, as a survivor herself, Dr. Igonoh’s advice to other patients is to first gather the psychological strength to battle the virus. “Do not be defeated in your mind first,” she told Dr. Cleary. “Cause once you [are] defeated in your mind, you won’t even want to take the ORS.” 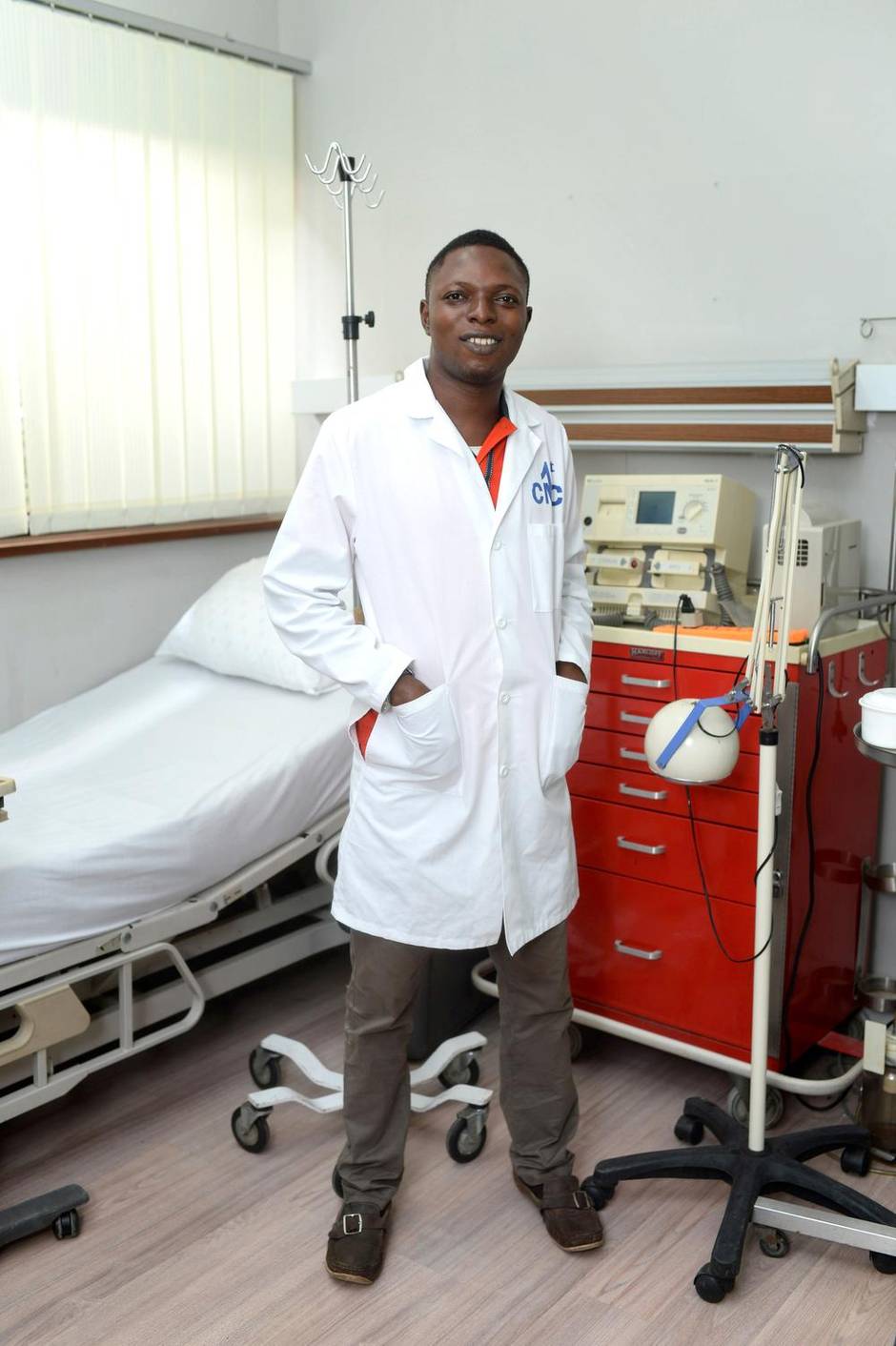 When Dr. Adejoro went to set an IV line for Mr. Sawyer on the night before his death, the patient reached out and shook the doctor’s hand just before the doctor slipped on his gloves. Still, Dr. Adejoro told Dr. Cleary that he could not say for certain whether that slip led to his Ebola infection. Between a week and 10 days later, Dr. Adejoro’s symptoms began.

Dr. Adejoro found it “very, very difficult” to drink enough ORS to stay hydrated. He was the only one of the six survivors Dr. Cleary interviewed who received IV fluids, which aided his eventual recovery. His worst moment came when his boss, another doctor, died. She was one of the eight Nigerians killed in the outbreak. “Seeing my senior, my boss in that kind of condition, it was really painful,” he said.

Within two weeks, Dr. Adejoro’s own symptoms began to subside. “I think the fluid helped me and then my faith [helped me,]” he said. “A lot of people were praying for me.”