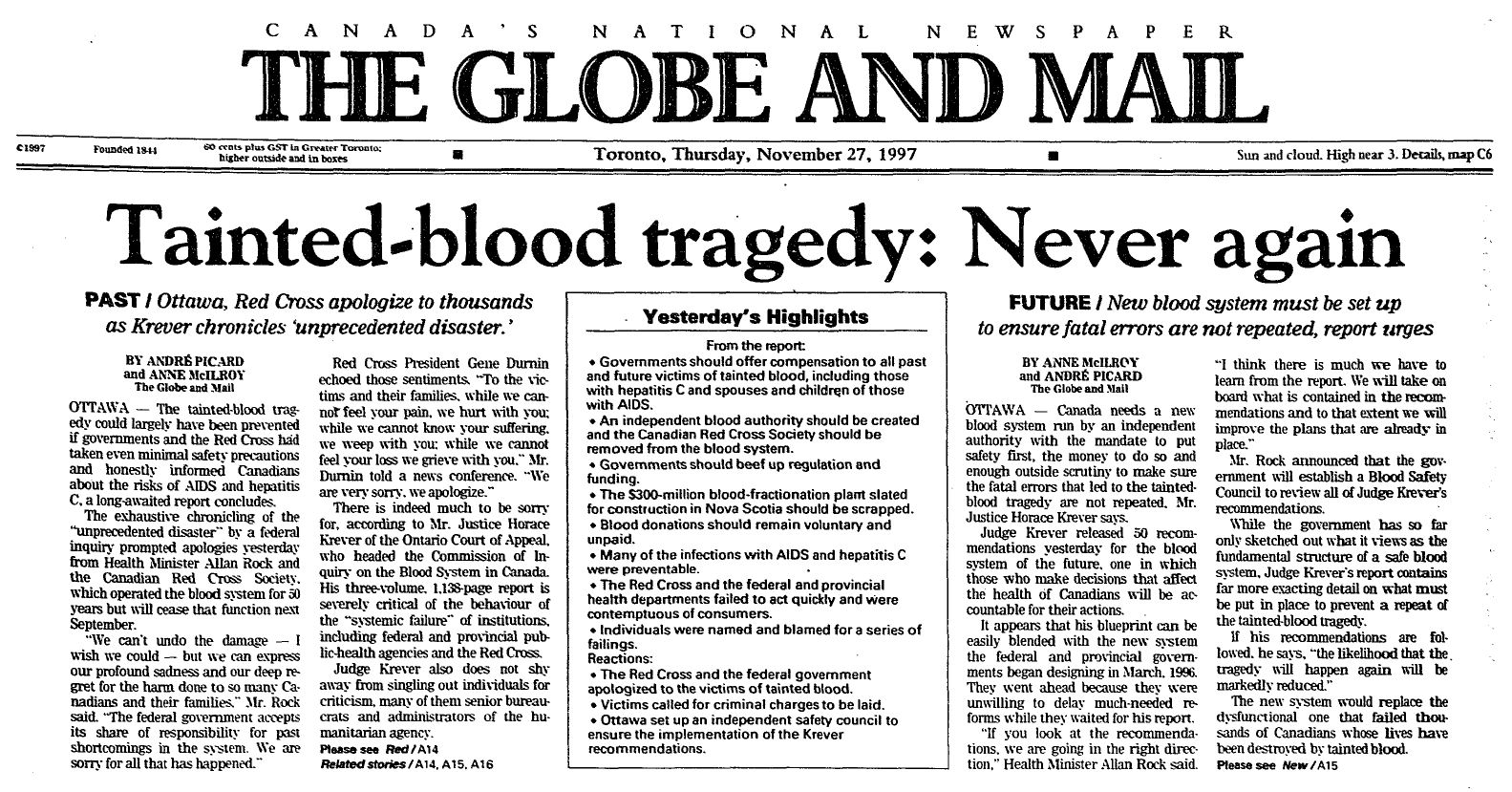 Canada needs a new blood system run by an independent authority with the mandate to put safety first, the money to do so and enough outside scrutiny to make sure the fatal errors that led to the tainted-blood tragedy are not repeated, Mr. Justice Horace Krever says.

Judge Krever released 50 recommendations yesterday for the blood system of the future, one in which those who make decisions that affect the health of Canadians will be accountable for their actions.

It appears that his blueprint can be easily blended with the new system the federal and provincial governments began designing in March, 1996. They went ahead because they were unwilling to delay much-needed reforms while they waited for his report.

"If you look at the recommendations, we are going in the right direction," Health Minister Allan Rock said. "I think there is much we have to learn from the report. We will take on board what is contained in the recommendations and to that extent we will improve the plans that are already in place."

Mr. Rock announced that the government will establish a Blood Safety Council to review all of Judge Krever's recommendations.

While the government has so far only sketched out what it views as the fundamental structure of a safe blood system, Judge Krever's report contains far more exacting detail on what must be put in place to prevent a repeat of the tainted-blood tragedy.

If his recommendations are followed, he says, "the likelihood that the tragedy will happen again will be markedly reduced."

The new system would replace the dysfunctional one that failed thousands of Canadians whose lives have been destroyed by tainted blood.

In the old system, the Canadian Red Cross Society was funded by the provinces to collect and distribute blood and blood products. The federal government was, and continues to be, responsible for regulating safety.

A transition team is in place to set up a new, arm's-length agency, funded by the provinces, that will be in place no later than September, 1998. It will be called Canadian Blood Services.

Judge Krever says a public blood system, in which donors are not paid except in rare circumstances, must be maintained. He recommends that a national system for the collection and distribution of blood and blood products be run by a single, independent operator created by an act of Parliament.

Provincial and territorial health ministers should be members of the corporation, he says, but the federal government, which is responsible for regulating the safety of the blood system, should not be.

The new agency should be run by a board of directors, which cannot include any politicians or public servants, Judge Krever says, adding that the Red Cross should also have no role in the new system.

Although the new system must be integrated, he says, it does not need an expensive fractionation plant to separate the component parts of blood.

This is the same model that the federal and provincial governments had agreed on, although Quebec has opted out and says it will run its own system. (Mr. Rock said the federal government would continue to regulate the safety of the system in Quebec.)

But there are key differences between what Judge Krever recommends and what the federal and provinces have in mind, especially on the issue of funding.

At the moment, the provinces finance the blood system, and were planning to continue to do so.

But Judge Krever says history has shown that money was a key issue in the systemic failure that led to the tragedy of the 1980s and if a new national blood service is to respond to challenges to safety, "it must control its own budget."

So he suggests that the new national blood service should be funded by payments from hospitals for the blood and blood products they need.

Instead of directly funding the new agency, the provincial and territorial governments would increase the budgets of hospitals so they could pay for blood and blood products without affecting their other programs.

Prices would be fixed by the national blood service to cover costs but not to make a profit.

Some user groups, including hemophiliacs, oppose this approach because they fear they will no longer have access to expensive products that they need.

Durhane Wong-Rieger, president of the Canadian Hemophilia Society, said she shares Judge Krever's concern that as long as the blood agency is dependent on governments for money, it will not be able to make independent decisions.

But she is worried consumers will be hurt if the hospitals are in charge of the money.

"Blood is unpredictable. You can use very little one year, more the next. Hospitals could exhaust their budgets and that would leave some people with a less-than-adequate amount of blood."

Judge Krever has clearly been following the federal and provincial governments' efforts on a new blood system, and he seems to approve, for the most part. He criticizes them, however, for offering the Red Cross a role in recruiting donors and applauded the charity for turning it down.

"One of the most important lessons to be learned from the past is that it is a mistake to separate blood-donor recruitment from operations," Judge Krever says. "In making their offer, the ministers showed that they had not learned this lesson. In rejecting the offer, the Red Cross, to its credit, showed that it had."

Indeed, the judge opposes contracting out any of the essential roles in the collection and delivery of blood. (The fate of 2,300 Red Cross workers is still up in the air.)

Because using blood will never be risk-free, Judge Krever says, the new blood agency must promote alternatives and help educate Canadians so that they can make informed decisions about getting blood.

Outside scrutiny is key to the safety of the new system, the judge says. The new national blood service should employ a safety auditor, who would be a senior officer but would not be part of the organizational hierarchy and would report directly to the board.

Three standing committees, which would include those who rely on the blood system and independent safety experts, should be established to oversee safety, keep abreast of scientific and technical advances and deal with consumer groups, the report says. About 20,000 Canadians have blood disorders and many of them use blood or blood products. 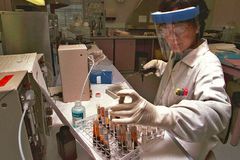 In Depth
From the archives: Hemophiliacs pay a deadly price in tainted blood scandal
January 10, 2019 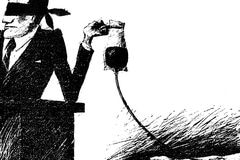 Follow Anne McIlroy and André Picard on Twitter @AnneMcIlroy @picardonhealth
Report an error Editorial code of conduct
Due to technical reasons, we have temporarily removed commenting from our articles. We hope to have this fixed soon. Thank you for your patience. If you are looking to give feedback on our new site, please send it along to feedback@globeandmail.com. If you want to write a letter to the editor, please forward to letters@globeandmail.com.
Comments