Classes at Ontario's 24 colleges could resume as early as Monday if the union representing 12,000 faculty members comes to an agreement with college administrations when the two sides meet on Thursday. Faculty have been on strike since Oct. 16, the fourth such labour dispute in 50 years, and one that has shut out almost 230,000 full-time students across the province.

While news that the parties will resume negotiations was welcomed by students, the conflict has highlighted the long-running and growing tension over the high number of part-time instructors.

Currently, as many as 81 per cent of college instructors are part-time or contract workers, according to the Ontario Public Service Employees Union (OPSEU), which represents college professors. Colleges counter that half of teaching hours are delivered by full-time staff.

The union would like to see full-time positions increase to make up 50 per cent of all teaching staff.

"Eighty-one per cent is untenable in an education system, with folks who have been working like this for years," said JP Hornick, chair of OPSEU's bargaining team for the college professors. "Many of the [instructors] work at two or three colleges just to make ends meet," she said.

Hiring a set percentage of full-time staff would increase their costs by $250-million, colleges have responded. It would also deprive them of the flexibility to hire professionals who are plugged into the needs of the labour market and are only looking to work part-time.

"When [education minister and former premier] Bill Davis created colleges, he created them to be different than universities, to help people get applied learning," said Don Sinclair, the CEO of the College Employer Council, the body that represents colleges in bargaining. "I don't think we are interested in being like universities."

Yet in the past two decades, that original separation between colleges and universities has become less defined. In that time, colleges have begun to offer bachelor's degrees – at last count, there were 202 programs leading to a bachelor's degree, not including the 38 offered by Sheridan College, which is in the process of becoming a university. Students are flocking to these programs, which give them a traditional university credential and applied experience, research has found.

Degree programs are also driving the hiring of teachers with advanced credentials, whether a master's or PhD. That's because to win government approval to start up bachelor's diplomas, colleges have to show that they either have, or will hire, highly trained teaching staff.

"You end up in a situation with [people] who are not necessarily the best teachers but they have the highest degree," she said. "I have nothing against folks who have done their PhDs in English literature, but does that mean that you are best suited to teach students how to construct a really basic postsecondary essay?"

That lack of fit between what students need and what they learn in the classroom is one of the reasons the union has asked that faculty have more input into how programs are designed, she said.

Yet as colleges look for those with advanced degrees, they are trying to keep a tight lid on salary costs.

Between 2014 and 2016, college expenditures on the salaries of part-timers increased by 7 per cent while rising only 5 per cent for full-timers, according to numbers submitted by the colleges to the province, and provided to The Globe and Mail by the Ministry of Advanced Education and Skills Development.

For college instructors who rely on teaching for their income, the lack of full-time jobs just breeds resentment and frustration, some teachers said.

"Most of us in my faculty are not in industry. We are mostly academics who are teachers first and foremost," said Anna Ainsworth, a professor at Seneca College. Seneca offers 18 BAs, including in interdisciplinary studies. "Teaching is our job and what we are trained to do; we are not professionals," said Dr. Ainsworth, who has a PhD in political science from York University and worked on contract for eight years before landing a full-time job.

For many students, the immediate concern is not to lose any more class time.

Some colleges are considering holding classes until Dec. 22, having exams in January or extending course hours. All those options cut into students' work and holiday time, said Joel Willett, the president of the College Student Alliance, which represents students at the province's colleges.

"Students need their winter break to re-energize for what is next," said Mr. Willett, who was at Queen's Park on Wednesday with other students to demand an end to the strike. "Extending the semester is going to have an adverse effect on their ability to be successful in [the second term]."

Editor’s note: An earlier version of this story included incorrect information about the number of degree programs offered by colleges in Ontario, stating that Seneca College offered more than 50 BA programs, Sheridan offered 161 such programs and there were 400 in total across the province. In fact, Seneca College offers 18 such programs, Sheridan offers 38 such full-time programs and there are 202 full-time degree programs at Ontario colleges. 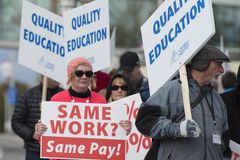 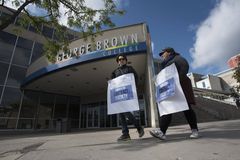 Ontario college strike: What you need to know
October 16, 2017 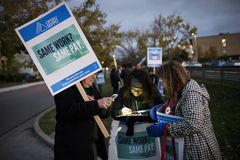