A teen who took part in two high-profile sex attacks in Winnipeg faces the prospect of a life sentence after a judge ruled Monday he should be punished as an adult.

The offender, who was 17 at the time of the random attacks on a teen and a woman in November 2014, can't be identified until the court imposes his sentence next year.

He pleaded guilty to two counts of aggravated sexual assault earlier this year. He had no criminal record at the time of the attacks.

Seated in the prisoner's dock, he hung his head and showed no apparent emotion as Court of Queen's Bench Justice Gerald Chartier ruled a youth sentence would not be long enough to hold him accountable and allow for his safe re-entry into society.

The maximum sentence for aggravated sexual assault under Canada's youth justice system is three years. As an adult, it is life in prison.

Neither the Crown nor defence have made sentencing recommendations yet.

Chartier described the separate Nov. 8, 2014 attacks on a 16-year-old girl and 23-year-old woman as "outrageous and horrendous."

"The long-term protection of the public would best be served by an adult sentence," said Chartier.

Co-accused Justin Hudson, 22, has pleaded guilty to the same charges and is awaiting a different judge's decision on sentencing. The Crown wants him to serve a life term without a chance of parole for seven years.

Chartier called the woman and the teen girl "random and helpless victims" who were subjected to "gratuitous violence."

Neither can be identified due to a publication ban.

The teen, however, went on to become an advocate for a national inquiry into missing and murdered indigenous women.

The teen was sexually assaulted, beaten and ended up in the Assiniboine River. She managed to crawl out before being attacked again with a hammer. A passerby found her clinging to life hours later.

She went into cardiac arrest twice after being rushed to hospital in critical condition, court heard. She suffered 34 separate bruises and lacerations, Chartier said.

"I have spent a lot of time in hospitals since you attacked me, repairing injuries to my body," the girl wrote in a victim impact statement read at Hudson's sentencing hearing.

"I have scars on most of my limbs, everyday reminders of that night," she said.

"I feel sad. Angry. Confused. It's more than those words can possibly convey. The pain is a heavy weight for me to carry."

Hours after the first attack, the pair repeatedly sexually assaulted and severely beat another woman. She spent three days in hospital with a concussion and facial injuries.

"At the time it was happening, I was so scared," the woman wrote in her victim impact statement, also read at Hudson's sentencing hearing.

"I did my best to 'act' as they wanted me to out of fear that they would hurt me even more. This made me so disgusted with myself and I hated my body for such a long time after."

The teen attacker has fetal alcohol spectrum disorder, a low IQ and suffers from post-traumatic stress disorder stemming from sexual abuse inflicted on him as a child, court has heard.

He told a psychologist he felt pressured into taking part in the attacks believing Hudson would assault him if he refused. An expert said it was likely his FASD made him vulnerable to peer influence.

The judge noted he still had the presence of mind to clean blood off his shoes and get rid of them after committing the crimes. He remains a high risk to reoffend, Chartier said. 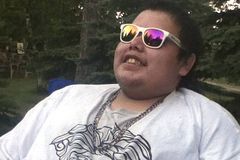 Man charged in assault on Winnipeg teen likely to stand trial in fall
March 14, 2016
Report an error
Due to technical reasons, we have temporarily removed commenting from our articles. We hope to have this fixed soon. Thank you for your patience. If you are looking to give feedback on our new site, please send it along to feedback@globeandmail.com. If you want to write a letter to the editor, please forward to letters@globeandmail.com.
Comments are closed