Calgarians are being urged to stay away from the city's downtown core, and all public and Catholic schools are closed Friday as river water levels are projected to rise throughout the night, with the city bracing for the overland flooding expected this morning.

The bulk of evacuations for up to 100,000 people living in low-lying areas were expected to be completed overnight – with police and city officials urging workers to stay away from Calgary's corporate towers, including a number of downtown blocks expected to be evacuated – and be careful around river banks and bridges. Many of the evacuees won't be able to return home until at least Saturday. The city's main homeless shelter was evacuated late Thursday, the city issued warnings about public transit interruptions, and the main downtown health emergency centre has been closed.

Although only a few neighbourhoods were experiencing overland flooding late Thursday night, Dan Limacher, Calgary's director of water services, said city residents could wake up to a different city on Friday. Water flows are eight to nine times higher than normal at this point in June, he said. "Tomorrow morning, we will see a lot more water in the city than we see tonight."

Mr. Limacher emphasized that the city's drinking water shouldn't be affected by the flooding.

City officials said a few people were refusing to leave their homes but power and natural gas supplies are being cut in areas where the mandatory evacuation orders were issued. Traffic at evacuation centres was light as most people found a temporary bed at a friend or family member's home.

The disaster unfolding in Calgary was part of wider flooding that played out across southern Alberta Thursday, as flash floods hit the community of High River south of Calgary, a tiny creek became a deluge that washed away yards and fences in the mountain town of Canmore, and debris in rushing water triggered a sour gas leak in Turner Valley, south of Calgary.

"It's actually one of the most significant flood events this city has ever experienced," alderman John Mar said in an interview. "This is a state of emergency, the first in this municipality since the 1920s."

Alberta Municipal Affairs Minister Doug Griffiths arrived at the city of Calgary's emergency centre late Thursday, telling reporters that government is coordinating activities. He said the Canadian military may be called, in some specific instances, to help.

Mr. Griffiths said emergency crews would continue to work through the night "to make sure that Albertans are safe, and try to protect as much property as possible as the situation unfolds."

Justin Thompson, his wife and two young children were given less than an hour's notice to evacuate from their low-lying Sunnyside home in inner city Calgary Thursday evening. After dropping his family at his in-laws' higher ground house, he returned to his own home to retrieve crucial documents from the basement.

"I am surprised how close the river is from the top of banks right now," he said while surveying the Bow River from a nearby hill.

"I've never seen it this high. It's pretty wild."

City officials said the water levels seen in Calgary are three times as bad as the floods that hit southern Alberta in 2005. They were forced to accelerate the pace of evacuation just before 7 p.m. after they were surprised by increasing water flow on the Bow River – after originally believing water levels would remain constant through the night – adding parts of two low-lying inner-city neighbourhoods to the evacuation orders.

In High River, the rise in water levels was so rapid that an evacuation centre itself had to be evacuated. One woman was missing after being swept into the Highwood River near the town.

Okotoks, Calgary, Canmore, Lethbridge and Crowsnest Pass are among the towns that have declared states of emergencies and evacuated some residents. The Canadian Forces dispatched helicopters to rescue residents stranded on rooftops and clinging to treetops.

Barbara Mathies, who lives in Elbow Park, said she was "a little panicky" after learning from her neighbour about the order to flee. She and husband Richard Emmer made plans to stay with a local friend, whose husband was stranded in Banff by flooding and highway closures. "I just called Richard to say, 'Please can you come home?' Because I need some help to decide what to pack. It might be three days, and rumour has it that our electricity might be turned off, so I need to figure out what I'm going to do with the stuff in my fridge – just little things like that," Ms. Mathies said.

The Calgary Zoo, through which the Bow River flows just east of downtown, evacuated nonessential staff as the city closed two bridges that provide access. The facility closed on Thursday and will remain shut Friday.

"Our animal care team, along with our facilities department, will continue to monitor the situation throughout the night and into tomorrow," spokeswoman Larissa Mark said. "They will be taking all necessary precautions should the island experience any flooding. Our animals will be moved to higher ground and into sheltered spaces for protection."

Calgary Mayor Naheed Nenshi made a plea for residents to stay clear of the flood zones as waters rose. "We've got lots of people out there sandbagging and berming. We need the assistance of the community in this, both in staying away from the riverbanks and assisting where they can with their neighbours," Mr. Nenshi said following a lunchtime speech in Toronto before getting on a plane back to Alberta. "If you don't live near the river and you can offer a place to stay for friends and family, that would be a very good thing."

The Calgary Board of Education closed six schools in potential flood zones for Friday.

In Turner Valley, another town just south of Calgary, a pipeline carrying dangerous sour natural gas broke open because of the natural disaster.

Highways accessing Canmore were closed, isolating the Rocky Mountain community. Nearby Banff is in better shape, with no expectation of flooding and no danger of mudslides reaching the town, although all roads into the internationally famous tourist destination were closed on Thursday evening.

With reports from Steven Chase in Ottawa, John Ibbitson in Banff, Alta., and The Canadian Press 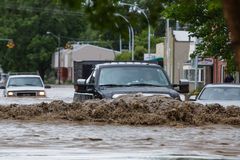 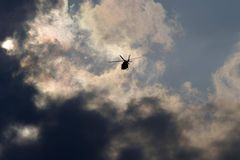 Follow Carrie Tait, Kelly Cryderman and Jeffrey Jones on Twitter @CarrieTait @KellyCryderman @the_Jeff_Jones
Report an error Editorial code of conduct
Due to technical reasons, we have temporarily removed commenting from our articles. We hope to have this fixed soon. Thank you for your patience. If you are looking to give feedback on our new site, please send it along to feedback@globeandmail.com. If you want to write a letter to the editor, please forward to letters@globeandmail.com.
Comments