Our bucktoothed icon is hard-working and monogamous, steadfast and stable in the Canuck way. But beloved? Not when one drops a tree on your cottage or floods your land with its dam. These days, however, the beaver has a new brand: eco-saviour. An increasingly vocal group of scientists and conservationists believes the dam-building rodent is an overlooked tool to mitigate climate change - a natural remedy for our sick rivers and ravaged wildlife. Fly away with that, bald eagle.

It's the beaver's avid dam-building that makes it a star with conservationists. In 2002, when University of Alberta biologist Glynnis Hood was in the middle of getting her PhD, the Prairies experienced the worst drought on record. She watched the wetland dry up "right before her eyes." But where beaver dams existed, the pond water remained. Poring through 54 years of historic aerial photos, records of beaver populations and climate data, she discovered that the ponds with active beaver lodges had nine times more water during droughts than ponds without dams. In dry summers, the beavers kept water from trickling out and built channels to guide the water in; they had more impact than any rainfall or drought. Dr. Hood says this wasn't a surprise to some of the older farmers, who often kept well-placed beavers on their land. Yet she would go to conferences where engineers would give presentations on river flow (with beaver dams in their photos) and never mention the animal. In wetland and river restoration, which in the U.S. has cost billions of dollars, the very creature responsible for shaping the landscape was largely absent from the discussion.

As an environmental engineer, the beaver is a full-service deal: raising the water table, increasing biodiversity, even cleaning up pollutants. In Washington State, where hot summers dry up forests and have caused severe water shortages, a pilot project found that beaver dams stored five to 10 times more groundwater reserves than rivers without dams, and slowed the spring runoff. And rather than casting the shadow of a concrete dam, they improve the view. Recent studies show that when beaver dams were added to wetland-restoration efforts, the population of frogs, toads and songbirds rebounded. Native foliage returned. The dams created waterholes for moose and other animals in times of low rainfall. They slowed down water flow in rivers and shored up banks, while preventing sediment and pollutants from being carried downstream. One study of a Russian river examined the impact of pollutants from a cheese factory: By the time, the water had passed through the dams, it was nearly as clean as before the factory. The 25 beaver ponds along the way appeared to be capturing the pollutants and breaking them down with bacteria.

Friends of the fish There is growing evidence that the presence of beavers improves endangered fish stocks. Beaver ponds are deeper, which means that they thaw earlier and freeze later, giving juvenile salmon more time to grow. The bark and branches that beavers drag into the water add nutrients and draw insects, which the young salmon eat. Deforestation and agriculture loosen the topsoil around many rivers and streams, which can suffocate life in a pond, but beaver dams prevent this from happening. In the past, beaver dams have been removed to create a single flowing river, or out of fears that the dams stopped the passage of adult salmon upstream. But the healthiest rivers are constantly changing and shifting - the very impact of beaver dams, which come and go. As Duncan Halley, a beaver researcher at the Norwegian Institute for Nature Research, points out, beavers populate six of the 10 largest salmon rivers in the country, without issue. Even in cases where beaver dams have been found to impede adult salmon, Dr. Halley says, no research has suggested that it was enough to affect river-wide populations.

Will work for free

The beaver, in certain places, is better than a bulldozer, and far less expensive. "It's about $10,000 a hectare to replace wetlands, and you've got something to do it for free," Dr. Hood says. "The problem is that you also have something you can't control as easily as a backhoe." But this hasn't stopped several countries from trying to bring back the beaver. In Denmark, the European beaver was introduced in an area of planted pine forest where they got busy building dams and restoring the streams and rivers. (And making "beaver land" a popular tourist attraction.) In Scotland, the return of the beavers after 400 years has been more controversial, with salmon anglers, who fret over their stocks, pitted against conservationists, who believe in the rodents' environmental benefits. (In August, the first baby beavers were born.) In the United States, Wyoming offered beavers to landowners as a restoration strategy, and a similar plan is in the works in Oregon. "We humans like to engineer solutions to our environmental problems," says Steve Zack, a biologist with Wildlife Conservation Society in Oregon. "But meanwhile we have these beavers who do a spectacular job."

Canada may have been built largely on the (skinned) backs of beavers, hunted nearly to extinction for their fur, but messing with them today will inevitably lead to trouble. Oshawa city council discovered this the hard way last year when it tried to dispatch a beaver colony from a man-made pond built to stop stormwater flooding. Protests ensued ("Give a dam! Save our beavers!"). Taking the contrarian position, a city council candidate in the fall election posted signs that read: "Vote Dave Spackman. Kill the Beavers"; he came a distant second last, and the council is now considering a $60,000 solution so that the beavers can stay. A similar debate rages in Squamish, B.C. Prince Edward Island was forced last year to cull 150 highway-flooding beavers - with regrets. And in Saskatchewan, despite repeated calls for a beaver bounty (at $20 a head), the province chose instead to compensate farmers for property damage. "They're not your average beavers," local reeve Wes Black laments. In his municipality, two men work every day, including weekends, all summer long to break up the problem dams - only to find many rebuilt the next morning.

The challenge, the researcher says, is to find a balance with the beaver - to put them where they happily improve the environment, in healthy numbers, without clashing against urban sprawl. "It's as though two control freaks are competing for the same environment, and there's been this ongoing battle ever since," says Dr. Hood, who has just completed the manuscript for a new book, The Beaver Manifesto: In Defence of Tenacity. She spent 19 years on the front lines as a warden for Parks Canada while humans and beavers tussled over land - when the phone rang, she says, you could usually count on a beaver being involved somehow. "We like nature as long as it's well behaved," Dr. Hood says, "and once it starts getting the crayons and running loose, then we get worked up about it." Except that now may be time for one control freak to step aside - and let a few well-placed beavers run loose with the crayons.

Erin Anderssen is a feature writer for The Globe and Mail. 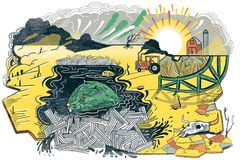