Smog days for most North Americans evoke the factory smokestacks and the traffic-clogged freeways of a modern polluted city on a hot summer day.

In Montreal, smog days come in winter, and while cars cause the largest part of pollution, bad-air days are triggered by the open flames used to cook bagels and rotisserie chicken and, especially, the fireplace sparked up for the warm, romantic glow against the chill.

After another mostly clear summer, the city has had at least five days of smog warnings since November, all of them caused by the fine particles from wood smoke. This year, Montreal will introduce new regulations – some of the toughest in North America – but critics question whether they will be enforced.

The city has 50,000 domestic wood-burning appliances, and the new rules will force homeowners to replace or stop using most by Oct. 1. All stoves and fireplaces can release no more than 2.5 grams of particles per hour. Older fireplaces emit up to 20 times more.

Other cities have air pollution from wood burning. New York has banned new fireplaces, and Vancouver is considering new emissions standards, but neither city has the scale of problem found in Montreal, where use of wood exploded after the 1998 ice-storm blackout.

In 2011, the World Health Organization found the city was the second-worst in Canada for air pollution, right behind Sarnia, Ont., with its refineries and factories known as Chemical Valley. Ontario's closing of coal-fired power plants that sent smoke up to the St. Lawrence helped improve the situation and shifted attention to the homegrown problem.

The fireplace is as close as many people get to an open flame in the modern world, and the romantic attachment is persistent. In the English language, hearth and home go together. In French, they are the same word: foyer.

But romance and tradition come at a steep cost: Public health officials say up to 1,500 Montrealers die prematurely each year from air pollution, about half from fine particulates that emanate from burning wood.

The city is promising to enforce emissions regulations more strictly on dozens of bagel, chicken and pizza joints that blow tonnes of smoke into the city's air. It has eight inspectors dedicated to all of the city's environmental issues. Critics say this is not nearly enough to force compliance.

Montreal photographer Hazel Field has been campaigning for 40 years against wood burning. She spent years battling a neighbour who polluted her house. More recently, her target is a rotisserie chicken joint that failed inspections but burns on.

Ms. Field has asthma, and recalled returning to Montreal last year from a five-month stay in Los Angeles, where she experienced one smog day. Her first three days back in Montreal were spent trying to catch her breath.

"I really don't think the city has the willpower to crack down," Ms. Field said. "At one point, they were going to ban wood burning altogether, but backed down. There is a lot of politics involved. The city gets the political hit for taking on wood burning. It's easier to do nothing and let the province and Ottawa pay medical bills."

About 39 per cent of Montreal's air pollution comes from wood burning, just behind transportation at 45 per cent, according to the City of Montreal. About 8 per cent of the wood-burning pollution is from food production.

"We can't work on the domestic side and ignore the commercial," said Jean-François Parenteau, the city councillor in charge of the environment. "We're asking residents to make an effort. We can't let commerce just carry on. Bagels are great, but we have to watch this impact."

Some of the city's biggest wood-burners are trying. Nick Morena, whose family owns St-Viateur Bagel, has just installed a $150,000 system to scrub pollutants from the smoke at one St-Viateur Street location. The company plans to begin testing soon, hoping to meet city standards.

If the system works, Mr. Morena says, the company will install it on its six other wood-burning ovens in the city. "We're excited to get it up and running," he said.

Sarah Gilbert, a neighbour of Mr. Morena's operations, has pushed the city for years to enforce existing rules. She expressed hope the scrubber will work and that the city is serious about a crackdown. "We have standards for a reason, but they aren't meaningful without enforcement," she said.

On the home front, experts say it costs $3,000 to $8,000 to replace a wood stove or convert a fireplace to wood-burning options that meet Montreal's emissions standards.

Charles Hamel of Poêles et Foyers Rosemont said business is brisk for conversions, but mostly from wood to gas, which can be done for as little as $2,000, and is cheaper, cleaner and heats better. "The wood fireplace is starting to die," he said. "It seems less romantic, but people fall in love with it."

Sam Berrada, a West Island homeowner, will convert his fireplace to a high-efficiency wood-burning unit even though he uses it only about once per winter month. Mr. Berrada says he is happy to mitigate environmental harm, but is reluctant to let go of wood.

"For me, it's very simple. It's a type of insurance in case of an ice storm or any other grid failure," he said.

Montrealers with older fireplaces would be allowed to use them in a future blackout, but Mr. Berrada's new unit will produce much more heat with far less pollution. "There's no comparison," he said. 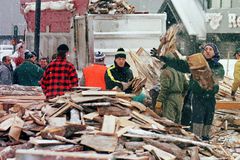 Environment Canada says southern Quebec smog alert could last until Wednesday
November 13, 2017
The quest for cleaner fire: Why it’s time to rethink our favourite way to get warm
February 17, 2016 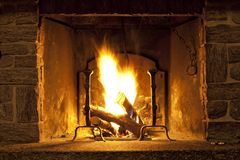