Welcome to Morning Update, The Globe and Mail's revamped newsletter for the day's big stories. Let us know what you think.

The future of free trade

The Trans-Pacific Partnership is effectively dead after Donald Trump on Monday made good on his promise to ditch the trade deal. Without the U.S. by its side, Canada is going to have a harder time reaching favourable deals with TPP partners. Next up on the trade front will be how Ottawa and Washington proceed with renegotiating NAFTA, with talks possibly starting within weeks. Canada shouldn't be "enormously worried," a senior adviser to Trump said during his visit to Calgary.

So what's in store for a Canada-U.S. deal? Ottawa will want to loosen Buy American rules, but that's unlikely to happen given Trump's protectionist rhetoric. Getting rid of rules that protect Canada's dairy farmers could be one U.S. target. America's bottom line will be "looking to limit Canadian access to the U.S. market," says one expert. (for subscribers)

Britain's Supreme Court has dealt a setback to Prime Minister Theresa May's timetable for pulling the country out of the European Union, ruling on Tuesday that Parliament must approve any move to trigger the EU exit mechanism.

The Liberals' reopening the review of a Hong Kong firm's bid to buy a Montreal high-tech company "shows Canadian policy can be compromised by foreign interests," Conservative public safety critic Tony Clement said. A 2015 national security review said allowing the deal to go ahead would diminish Western "military advantages," The Globe reported Monday. The Conservatives wanted the transaction nullified, but the Liberals are giving China's O-Net Communications a second chance at approval.

Pot shops are getting robbed

Toronto's illegal marijuana dispensaries are getting robbed but many aren't reporting the crimes. Out of 13 known armed robberies in the past eight months, only seven were reported by store owners or employees. Mayor John Tory says this shows dispensaries are a "magnet" for crime. But organized crime and gangs play a much smaller role in pot trafficking than that involving other types of drugs, according to a new Statistics Canada study.

A later school start time leads to better results in the classroom. Even an extra 10 minutes of shut-eye can make a difference, researchers at McGill University found. Take a school district in Northwestern Ontario, which changed its start time from 8:15 to 9 a.m.: "My attendance has been better. I'm not as tired. … I'm more ready to learn," one high schooler said.

Last week, McDonald's Canada said all of its products "may contain" nuts, and the response on social media has not been pleasant. The fast-food chain is sticking by its decision, while critics say the changes are "a really big mistake." A representative at A&W said the controversy has the company evaluating its own operations.

The recently volatile U.S. dollar rebounded with oil on Tuesday and the British pound fell after the U.K. Supreme Court ruled that Prime Minister Theresa May must get parliamentary approval to start the Brexit process. European stocks gained 0.3 per cent. Oil prices edged higher as signs that OPEC and non-OPEC producers were on track to meet output reduction goals largely overshadowed a strong recovery in U.S. drilling.

Will La La Land be nominated in every category? Questions like that will be answered when the Academy Award nominations are announced this morning. If Moonlight doesn't get its fair share of nods, "the world will know the industry is truly stuck in the past," our film experts say. Find out which actors, actresses and films they think deserve to be selected.

Canada sacrifices NAFTA to save itself

"If President Donald Trump is going to attack NAFTA because he's mad at Mexico, it's a wise move for Ottawa to hedge its bets in favour of its trade with the U.S. – by far the largest single trading partner this country has. … Led by Trump's 'America First' ethos, and by Britain's impending exit from the European Union, the old idea of continental and regional free-trade zones is under withering attack." – Globe editorial

"On a day that some were wondering if the relationship between the White House communications department and the reporters who cover it might devolve into a mixed martial arts cage match, [press secretary] Sean Spicer pledged to stick to the facts. (And then, he suggested parenthetically, sometimes the facts themselves might be up for debate. In fact, actual facts might not actually matter.)" – Simon Houpt

Having a strong grip can help you in the gym – and with that jar of pasta sauce that just won't open. One easy way to improve your grip is the "Dead Hang," where all you have to do is dangle from a pull-up bar in 10-second repetitions (don't worry, no pull-ups required).

The Eskimo Pie is patented

Jan. 24, 1922: A boy in Christian Nelson's Iowa confectionery shop couldn't decide between ice cream and a chocolate bar. That's when the light bulb went off. Nelson set about finding a way to bind chocolate to ice cream (cocoa butter would be the key). His "I-Scream Bars" were such a hit at a local picnic he partnered with a chocolate maker named Russell Stover to mass produce them. It was Stover's wife who came up with the name "Eskimo Pie." The patent, which would later be declared invalid, originally covered any type of frozen material covered with candy and even the word "Pie." Financial problems would eventually force the sale of the company. Now, the bars are sold by Nestlé and are not as popular as they once were. After all, there are a lot of ice cream bars and as delicious as they might be, that name might leave a bad taste in people's mouths. – Dave McGinn

The pros and cons of leaving NAFTA behind Subscriber content
November 12, 2017 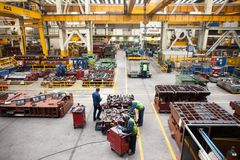 Opinion
To counter Trump on trade, Canada needs allies in Congress
May 17, 2018 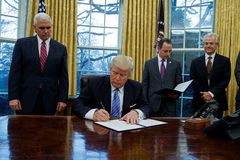