Like many teenagers, Donald Marshall drank, smoked and hung around the local park with rowdy friends. He might have grown up to become a stalwart citizen, a native leader, an entrepreneur.

We will never know because he lost the chance to realize his ambitions when he was convicted of murder, at 17, and imprisoned for 11 years for a crime he didn't commit. By the time he was finally released on parole in 1982, he was forever damaged by a miscarriage of justice and years of detention.

And yet, despite the tragedies of his later life, his name is synonymous with the fight for justice for the wrongfully convicted. He broke the trail for others, including David Milgaard and Guy Paul Morin, in challenging the legal system. The 1990 royal commission into his case produced 82 recommendations that fundamentally changed the criminal justice system in Nova Scotia. "He had a huge potential for leadership, which was never crushed by his imprisonment and which enabled him to contribute to the native community in Canada," said lawyer Clayton Ruby, a member of Mr. Marshall's legal team before the royal commission.

A proud Mi'kmaq, Mr. Marshall is also a hero in the battle against racism toward aboriginals in this country. He spent six years fighting discrimination in the courts to challenge the federal government's denial of the historic treaty rights granted to his people by the British Crown in 1760, a case that went all the way to the Supreme Court of Canada.

"He was a really shy person, but he was brave enough to go through the limelight a couple of times to change both the provincial systems and the federal ones and to make very significant changes," said Terry Paul, Chief of the Membertou Nation. "It is a tragic loss not only for me, being a personal friend, but for the aboriginal people across the country.

"He did so much and a lot of people benefited from his difficulties."

Donald Marshall Jr. was born on Sept. 13, 1953, on the Membertou Reserve in Sydney, N.S., the eldest of 13 children of Donald Marshall Sr., the Grand Chief of the Mi'kmaq Nation, and his wife Caroline. Called Junior by his family and friends, he was in line to inherit his father's honorary title.

A rebellious boy and a wild youth, he was expelled from the white school at 15 for striking a teacher and sent to Family Court. Given the choice of working with his father, as an apprentice plasterer, or going to the Shelburne School for Boys, an infamous provincial reformatory, he quit school with barely a Grade 6 education. That gave him lots of free time to join the Shipyard Gang, a bunch of Mi'kmaq toughs who generally made a nuisance of themselves.

Tall for his age, and physically more intimidating than some of the other gang members, Junior, the designated panhandler when money was short for rum and cigarettes, was not above petty thievery. Although there is little if any evidence to suggest he was violent - in fact the contrary seems to have been the case - it is certainly true that Junior was well known to the law, having spent four months in the county jail, when he was barely 17, for giving liquor to minors.

The details of his wrongful murder conviction have been well documented. Sandford (Sandy) Seale, a 17-year-old Afro-Canadian was on his way home from a dance, on May 28, 1971, when he met Donald Marshall by chance in Wentworth Park. The two teenagers were chatting when Roy Ebsary, a man later described as having "a fetish" for knives, and his companion Jimmy MacNeil hailed them from an adjacent street and asked for a light for their cigarettes. In the ensuing encounter, Mr. Ebsary stabbed Mr. Seale, who died of his wounds the next day.

Five days later, Mr. Marshall was arrested and charged with murder. He was processed through the justice system with such haste that he was convicted, after a three-day trial, less than six months after his arrest. Even when the Court of Appeal finally acquitted Mr. Marshall, the judgment was miserly, absolving the police of any responsibility, saying that Mr. Marshall had contributed in large measure to his own conviction and that any miscarriage of justice was more apparent than real.

Eventually, Mr. Ebsary was convicted of manslaughter in the death of Mr. Seale and sentenced to three years in prison, a sentence that was reduced to one year by the Court of Appeal in 1986. He died two years later.

Mr. Marshall had to wait until Jan. 26, 1990, to be completely exonerated when a royal commission called by then-justice-minister Jean Chrétien released its final report. The inquiry, which was chaired by Alexander Hickman, then Chief Justice of the Trial Division of the Supreme Court of Newfoundland, concluded that far from being a perpetrator, Mr. Marshall was the victim of racism and incompetence on the part of the police, judges, lawyers and bureaucrats. "The criminal justice system failed Donald Marshall Jr. at virtually every turn from his arrest and wrongful conviction for murder in 1971 up to and even beyond his acquittal by the Court of Appeal in 1983," the commissioners declared.

After submitting the final report to the Nova Scotia cabinet, Chief Justice Hickman said: "I really hope that at long last one Donald Marshall Jr. will stand high in the eyes of Nova Scotians, where he deserves to stand." Later that year, the provincial government awarded Mr. Marshall, who by then was 36 years old, a mere $700,000 in compensation for an ordeal that had lasted nearly two decades.

Three years later, Mr. Marshall was in trouble with the law once again when he was caught catching and selling eels with illegal nets, out of season, without a licence in Pomquet Harbour, near Antigonish, N.S. When officials from the federal Department of Fisheries and Oceans told Mr. Marshall and his companion to stop fishing, he didn't comply. Instead, Mr. Marshall, a proud Mi'kmaq who had learned the hard way to be wary of authority, phoned his friend Chief Paul and asked his advice. "I told him to keep fishing," Chief Paul said later. "I felt strongly that he had a right to be there and gain a livelihood."

The real trouble came when Mr. Marshall left the shore and sold his catch - 210 kilograms of eels - for $787.10. That exchange of money and goods provoked a legal battle that lasted six years, involved three courts and provoked learned discussions at the Supreme Court of Canada about the historic treaty rights that the Mi'kmaq had been granted in 1760 by the British Crown.

"This time I went to the Supreme Court for fishing. I wasn't there for myself. I was there for my people. It was more touching than anything else," Mr. Marshall said in September 1999 after the Supreme Court handed down its ruling, acquitting him on three charges of illegally catching and selling eels, and confirming native rights to make a living by fishing and hunting. Admitting he had thought about giving up the fight, he said that he kept going because "I knew that I had dealt with bigger problems."

His past problems were compounded by serious addictions to drink and cigarettes. In 2003, he had a double lung transplant in an eight-hour operation in a Toronto hospital to try to overcome the ravages of chronic obstructive pulmonary disease, a progressive and ultimately fatal lung disease whose symptoms are chronic bronchitis and emphysema.

Mr. Marshall later said the recovery was tougher than two trips to the Supreme Court.

He was feeling well enough in June of 2007 to celebrate his marriage to non-native Colleen D'Orsay, but the honeymoon was short-lived. Less than a year later she complained to The Cape Breton Post that Mr. Marshall had received only $156,000 of the $2-million the 33 Eastern Canadian chiefs of the Atlantic Policy Congress of First Nations Chiefs Secretariat had pledged to pay him in 2001 in recognition of his long struggle on their behalf to establish their historic fishing and hunting rights.

One of the exceptions was Chief Paul, who had given Mr. Marshall at least $100,000. "All I can say is that when I make a commitment, I stand by it," he told The Cape Breton Post, suggesting that Mr. Marshall was facing continuing health problems from his double lung transplant. "We felt it was the honourable thing to do, to be able to assist him."

Then, in October of 2008, Mr. Marshall appeared in a Sydney court accused of assaulting and threatening his wife and her former husband, lawyer Luke Wintermans.

Ms. D'Orsay was at Mr. Marshall's side when Mr. Marshall pleaded not guilty this January and his lawyer argued there had been an abuse of process when a local Crown attorney telephoned a police sergeant seeking an update, after some of the charges were laid. The matter, which has not been resolved, was on the court docket for later this month.

About a week ago, Mr. Marshall was admitted to hospital in Sydney, suffering from kidney failure, probably as a consequence of the anti-rejection drugs he had been taking since his double lung transplant six years ago. He died, aged 55, at 1:30 a.m. Thursday in the intensive care unit, surrounded by relatives.

Mr. Marshall's roller-coaster ride through the Canadian criminal justice system was finally over. "We pay the money, we have the public inquiry," said Mr. Ruby, his former lawyer, "but we can't make them whole again." 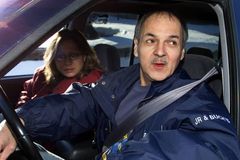