In the high panic which now grips Toronto's political class at the prospect of Rob Ford as mayor, some of the city's smartest people are desperately trying to point out the flaws in the portly fellow's appeal.

The common wisdom thus far seems to be this: Stopping "the gravy train" at City Hall, which was Mr. Ford's signature as a city councillor and is now his campaign cri de coeur, does not an election platform/policy/leader make. How, these folks ask, can the electorate - the most recent poll showed Mr. Ford has the support of almost a third of voters, with a big lead on the others - not see that he is a one-trick pony? Why are people paying attention to such nickel-and-dime things as councillors' expenses when there are such big issues demanding attention?

Well, I'm not smart, but this stuff I get.

First of all, Toronto politicians are very well paid: This year, Mayor David Miller will earn $167,769, plus $2.2-million for staff salaries and benefits, while the 44 councillors are each paid $99,619 annually plus $50,445 in office expenses (magnanimously, they voted themselves a five-per-cent reduction this spring, down from $53,100), and another $207,583 a year for staff.

If you add in the excellent benefits (the city pays 100 per cent of dental and extended health care benefits), the mileage (52 cents a klick) and the extras or perqs some receive for extra work (TTC Chair Adam Giambrone, for instance, isn't paid as chair, but racked up more than $100,000 in expenses), it costs taxpayers close to $400,000 a year per councillor (except for Mr. Ford and his always thrifty colleague Doug Holyday, who cost $254,000 and $291,000 a year respectively).

So in a city where, according to the 2006 census, individuals earned a median income of $26,754 a year, and annual family median income was $75,829 and declining, councillors' wages are nothing to sneer at.

That is one-half of the background.

The other is that many councillors use their office budgets in a variety of unappealing ways, most aimed at feathering the nests they have built or promoting themselves endlessly under the guise of keeping their communities involved.

Except for the smart people who know better that all this is peanuts, the rest of us see through the B.S. pretty quickly.

For instance, all those thoughtful flowers and wreaths that show up for funerals and retirement parties and the like from the local councillor - we paid for them.

For instance, all the generous "donations" and "sponsorships" to worthy causes, from Mr. Giambrone's generous $750 donation for a Lesbian Gay Bi Trans youth hotline to Sandra Bussin's notorious "Bussin Blue Jays" team in the East Toronto Baseball Association - we paid for them.

For instance, that NDP-dominated group of women (usually, Ms. Bussin, Shelley Carroll, Janet Davis, Paula Fletcher, Pam McConnell, Gloria Lindsay Luby and frequently Suzan Hall and Maria Augimeri) who meet as the "women's caucus" and always seem to do it over nice lunches at good restaurants - we paid for that.

That Aug. 14 movie night of Ms. Carroll's last year was so telling.

One other tiny expense speaks to the sense of entitlement with which so many councillors approach the public purse.

You may remember last fall a kerfuffle involving Ms. Bussin, who had phoned in as "Sandra" to the John Tory radio show on Newstalk 1010, outright denied she worked for the city, and called Mr. Tory a "three-time loser" as she defended the man she called the most brilliant municipal politician in the country, Mayor Miller.

She was promptly outed as the Ward 32 councillor and the speaker of council, and shortly thereafter apologized, sort of, while also demanding her own radio show.

Mr. Tory subsequently started a new show, The Live Drive, on Oct. 5, and among his first guests was Ms. Bussin, who actually came to the studio in mid-town.

Scrupulously polite, as ever, Mr. Tory reluctantly asked her about her earlier performance and Ms. Bussin grudgingly admitted "I should have said who I was" and pointed out that she had made her apologies.

Here she was, being graciously invited to the show of the man she had called a loser, whose listeners she had misled, and she couldn't even reach into her own pocket to pay for the gas.

(This little gem was unearthed by volunteers working for Bruce Baker, a candidate running against Ms. Bussin.)

The radio station couldn't afford the likes of her and increasingly, Toronto taxpayers are wearying of it too, the attitude in particular.

My hunch is therein lies the secret of Rob Ford's appeal - for all his personal failures, he's not one of them. 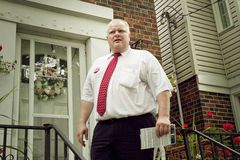