The designs are complete and first steel is due to be cut later this year. It's now clear what kind of patrol ships Canada will be sending into the Arctic – and how the Royal Canadian Navy plans  to use them.

How Canada will patrol the North

There has been criticism of the program on many fronts: how delays prevented a 2013 first-ship delivery; how projected costs jumped $400-million; why the Nanisivik Arctic naval base on Baffin Island was downgraded to a refuelling station; and how the ships – originally planned to be eight, but now only five or possibly six – would be slow-moving “slushbreakers,” as opposed to icebreakers.

But now the course is set. With the AOPS designs finalized and the first steel set to be cut in September at Irving Shipbuilding in Halifax, it’s finally clear what the Navy will be capable of when the new ships set sail for the Arctic.

The $3.5-billion deal signed with Irving in January calls for the construction of five ships, with incentives for the yard to deliver six. The 103-metre long vessels, each crewed by a complement of 65, will be able to cut through one-metre first-year ice, thereby opening a vast area of the southern portion of Canada’s Arctic archipelago to the Navy, as well as extending the navigable Arctic season in the eastern region from weeks to months. It’s expected the ships will be escorted by coast guard icebreakers for missions into heavier ice.

The first ship, named the Harry DeWolf after the decorated wartime RCN commander from Bedford, N.S., is scheduled to launch in 2018. The rest of them are expected to follow in roughly nine-month intervals.

The Nanisivik refuel station will play a key role. It will untether the ships from their bases in Halifax and Equimalt, B.C., allowing them to maximize their 6,800 nautical-mile range and 120-day endurance. The Navy says the ships will provide three key operational capabilities: 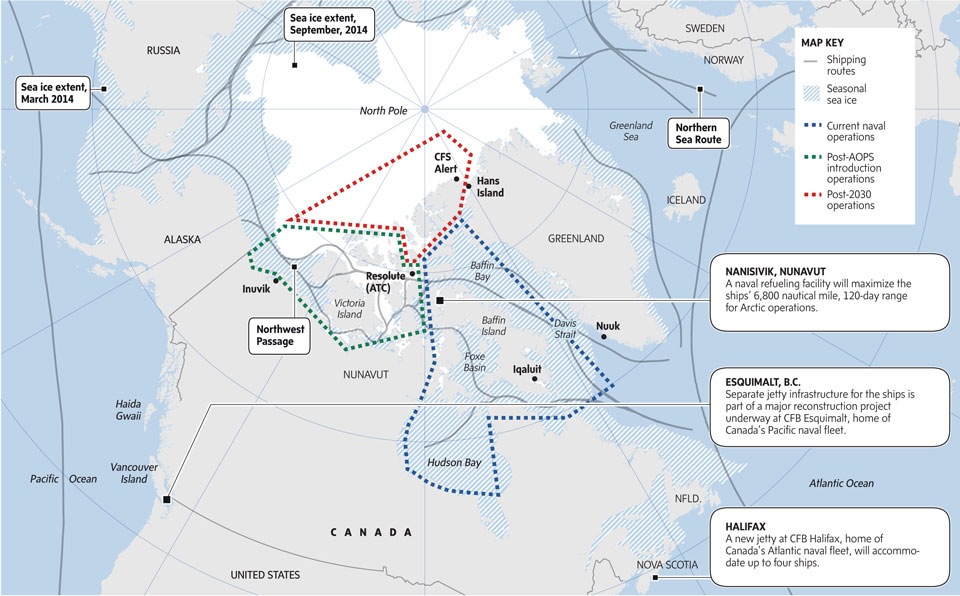 Mr. Harper says they will be able to patrol the length of the Northwest Passage during the four-month shipping season, as well as guard its approaches year-round. In 2013, ships made 22 passage transits, according to the Canadian Coast Guard, including the first-ever commercial transit by the Danish bulk carrier Nordic Orion.

Beyond that, “how the ships are going to be deployed in the Arctic is yet to be determined,” the Navy said in a statement to The Globe and Mail. “There are no specifically identified patrol areas to the AOPS. Patrol areas will vary depending on several variables, most notably the assigned mission.”

Declarations of the importance of the Canadian Arctic to the nation’s identity date back to the time of John Diefenbaker. But despite countless patriotic speeches by prime ministers since then, Canada has fallen short in asserting its sovereignty and authority in that vast region defined by water and ice, particularly when it comes to the Navy.

During the height of the Cold War, the state-of the-art navy icebreaker HMCS Labrador was used to help build the Distant Early Warning (DEW) Line radar system and show the flag in the High Arctic. The ship won fame in 1954 for circumnavigating North America, sailing from its home port of Halifax, transiting the Northwest Passage, then returning to Halifax through the Panama Canal.

But after the Labrador was transferred to the coast guard in 1958, military analysts argue, it was the Arctic’s harsh environment that did more to protect Canada’s sovereignty in the north than the Navy.

In recent years, climate change has raised the stakes and even non-Arctic nations have been looking north for new shipping routes, resource development and a place to express their national ambitions. In response, Mr. Harper laid out a more muscular approach for Canada in 2007.

“Canada has a choice when it comes to defending our sovereignty over the Arctic. We either use it or lose it. And make no mistake, this government intends to use it,” Mr. Harper said when announcing the navy’s AOPS program. “It is no exaggeration to say that the need to assert our sovereignty and protect our territorial integrity in the Arctic – on our terms – has never been more urgent.”

However, legal experts say there are only two small disputes related to Canada’s ownership in the North: one over the ownership of tiny Hans Island between Canada and Greenland, and the other between the United States and Canada over about 6,250 square nautical miles of seabed rights in the Beaufort Sea.

Vice-Admiral Mark Norman, RCN commander, says the key challenge the military faces in the far North is “sustainability.” It has conducted several operations and exercises in recent years, but they have been largely limited to the relatively mild eastern Arctic for a few weeks at the height of the summer.

“Obviously, the Arctic/Offshore Patrol Ships will play a key role in enabling the RCN with its other government partners in opening up our ability to operate and sustain operations in the High Arctic,” he told the Commons committee on National Defence in November. “We’re excited by the opportunity to establish a refuelling facility in Nanisivik, which will allow us to stage ourselves and reach even farther into the north.” 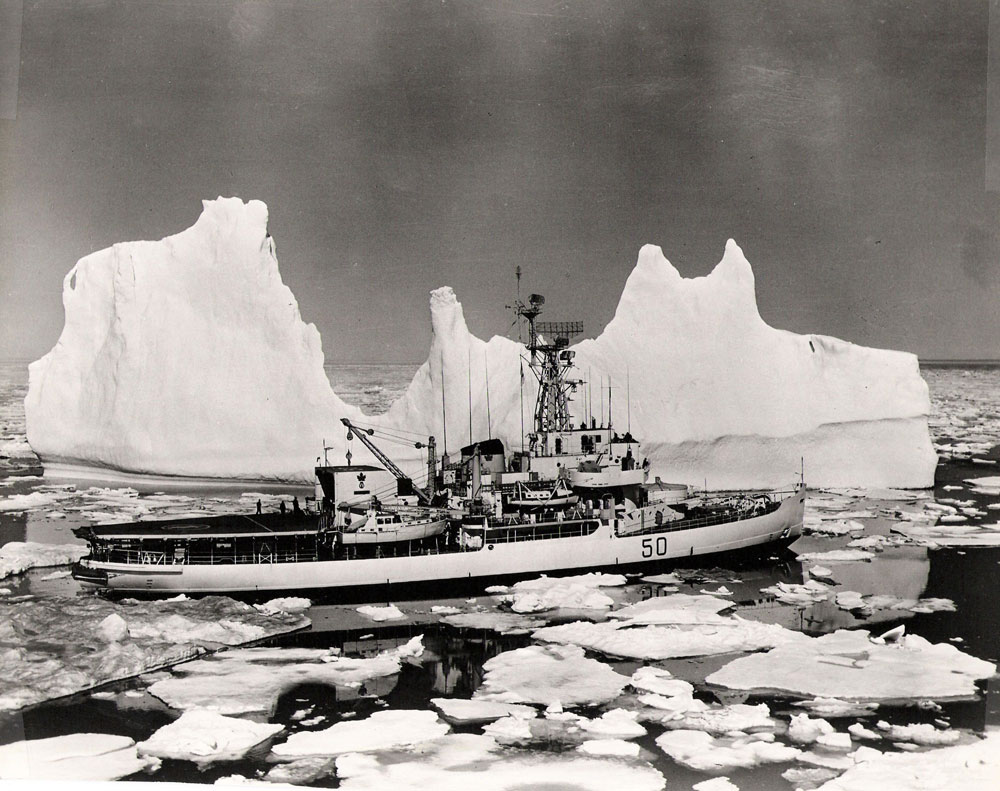 The icebreaker HMCS Labrador was used to help build the Distant Early Warning (DEW) Line radar system during the height of the cold war.

He said that reach must be in partnership with other government agencies and departments, particularly the Canadian Coast Guard and the RCMP. “We are looking to the experiences of our coast guard partners with respect to how we can sustain deployed activity in the north, looking at new crewing models, new ways of maintaining a visible presence, a Canadian flag … in that vast expanse that’s so important to us.”

The AOPS will be the first ships built under the $36.6-billion National Shipbuilding Procurement Strategy that Ottawa outlined in 2011. Following the vessels will be 15 surface combatants, three naval support ships, four other coast guard vessels for fishery and oceanography sciences, as well as a coast guard heavy icebreaker to be called the Diefenbaker. The shipbuilding program will span 20 to 30 years and create 15,000 direct and indirect jobs.

In Halifax, the Irving shipyard is busy completing a $300-million upgrading project to put in place new facilities, processes and workforce, with September set as the target to start work on the first ship, HMCS Harry DeWolf.

Based on sophisticated three-dimensional software, a design-then-build process will see the construction of 62 separate building blocks for each ship. In a complex 3-D puzzle, those blocks will then be assembled into three “mega blocs” – aft, centre and bow – which will in turn then be welded together to form a finished ship.

Editor's note: An earlier version of this article incorrectly said the navy icebreaker HMCS Labrador was the first ship to circumnavigate North America in 1954. In fact, the RCMP vessel St. Roch did so in 1950.