Every Paul Nicklen photo poses a question. Sometimes it's a question about the subject: Where are those bear prints going? Other times it touches on the metaphysical: Why do those meltwater channels look like human capillaries? And often, the question concerns the mental state of the photographer himself: How did he get so close to that bear's jaws without being eaten?

Much of Mr. Nicklen's life has been spent conducting a one-man polar inquisition. When he was four, his family moved to Iqaluit before settling in the village of Kimmirut, at the southern edge of Baffin Island. "The icy polar sea, snow, and ice were my sandbox, and the Inuit were my playmates and my teachers," he says of those days. He would trek far from home, examining the flora and fauna from every conceivable angle, even adopting seals and gulls as pets.

In 1990, he moved south to attend the University of Victoria, but the call of the North never stopped. After spending five unsatisfying years as a wildlife biologist, he decided the only job that would truly slake his thirst for the Arctic was that of National Geographic photographer, an audacious dream for a kid from Kimmirut.

Over the last 15 years, Mr. Nicklen's work has been featured in the magazine 15 times. He has earned more than 30 international awards, including a first-place World Press Photo honour last year, the highest recognition a photojournalist can receive.

On assignment, he generally travels with 14 to 20 cases, each weighing more than 25 kilograms. In pursuit of the perfect, intimate shot, he has stalled his ultra-light plane and run out of air beneath several feet of ice. All those moments of misery contribute to his greater cause of helping to preserve endangered areas.

"For me, if it is not intimate, it is hard to create the emotional connection I feel is needed for people to care about the challenges facing polar ecosystems," he told The Globe. "In order to do so safely, both for me and for the animals, I have spent years understanding their ecology, their behaviour and the subtle communication cues they are always giving me."

Over his lifetime in the North, he has seen the Arctic sea ice shrink. He says he won't stop until "people care about the regions as much as I do." It's a tall order. But then, the boy from Kimmirut has made a life of exceeding lofty goals. 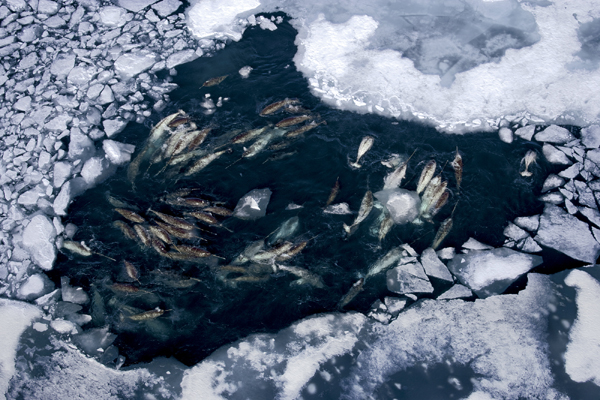 A pod of narwhal surfaces to breathe through the broken pack ice at Lancaster Sound, Nunavut. "I have witnessed the effects of climate change both on the landscape and on the wildlife and I try to communicate these changes with my images," Mr. Nicklen says. "I try to make photographs that are artistic and beautiful, but also that tell a story of what is happening to a place that is so important to our planet’s global health." 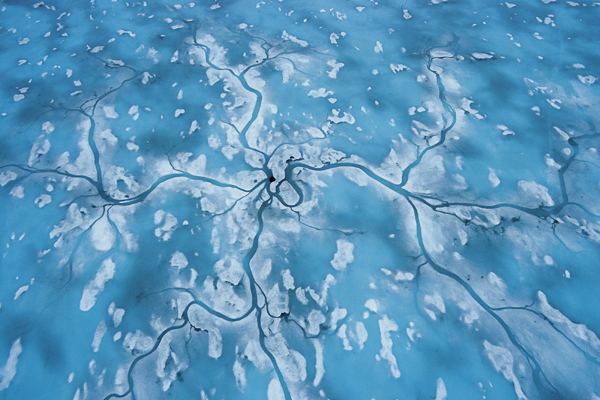 An aerial view of melting ice draining into the opening of a ring seal hole during the spring in Lancaster Sound, Nunavut. In his book, Polar Obsession, Mr. Nicklen writes about the melting ice in the spring: "White ice or snow reflects over 90 percent of the Sun’s energy back into space. As the snow melts from the surface, it reveals the much darker color of blue sea ice, which can then absorb up to 90 percent of the Sun’s energy, accelerating the melting process." 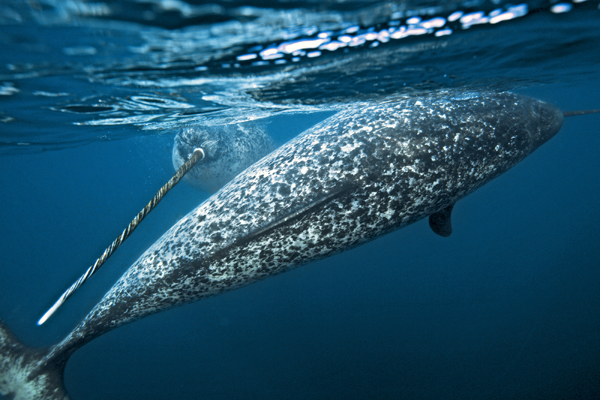 An underwater view of two male narwhals in Lancaster Sound, Nunavut. "I love the icy ecosystems and I am able to withstand cold temperatures, both of which give me a great advantage when working in these extreme environments," Mr. Nicklen says. 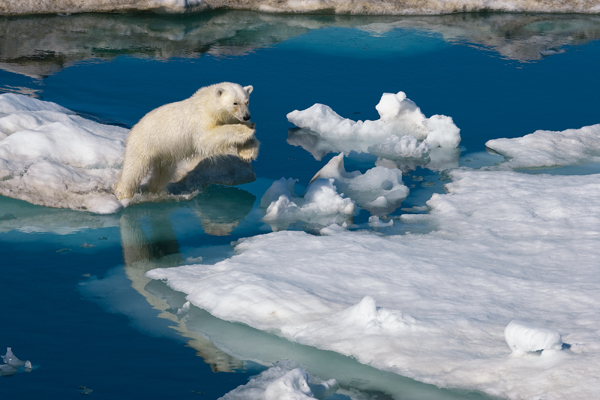 A polar bear navigates its way through the pack ice in the Norwegian Arctic. "It is a very simple message: If we lose the ice, we will lose an entire ecosystem that depends on ice," Mr. Nicklen says. "From polar bears to walrus, and from bowhead whales to Arctic cod, if we don’t change our ways, they will all disappear due to climate change." 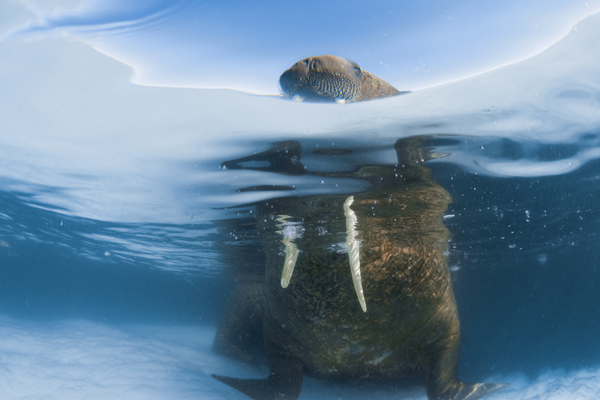 A curious walrus peeks into the clear water of Foxe Basin, near Baffin Island. "The only reason I have for hope is knowing that so many people care and maybe the combined efforts of thousands of individuals will amount to something that creates a tipping point before it is too late," Mr. Nicklen says. "We simply need many more people to care and the right people to care enough to effect change."