As some teachers briefly walked off the job this week and others worked to rule, Dalton McGuinty fondly recalled how another recent labour dispute ended reasonably amicably.

By returning to the bargaining table after walking away from it, the Ontario Premier said, doctors demonstrated that even after "a very rocky road" it was possible to arrive at a mutually agreeable outcome.

The suggestion that teachers should follow the doctors' lead sounds reasonable in principle. It is also either naive or a shade disingenuous.

Both the government and the province's two biggest teachers' unions are backed into corners, which means students are likely to be affected well into the new year.

And among the main reasons is that, unlike it did with the Ontario Medical Association, the government didn't leave enough room for face-saving compromises.

That was always going to be easier with the doctors, because there was more room for manoeuvring. The OMA represents 62 sections, with highly complicated fee schedules. So during this fall's negotiations, its leaders were able to propose a range of changes to restraint measures the government imposed last spring – taking money from some places and directing it toward others, in ways palatable to most members.

But while the options with teachers were more limited, Mr. McGuinty's Liberals narrowed them more than necessary. Off the top, for instance, the government announced that it would not even consider raising the caps on class sizes – a cost-saving mechanism that some teachers might have accepted, but that was deemed politically unpalatable.

In negotiations with the relatively agreeable Ontario English Catholic Teachers Association, the government still managed a bit of give-and-take – slowing increases on the "salary grid" for younger teachers rather than freezing them, in return for a few unpaid days.

It then effectively told the other unions that they had lost the right to shape their own contracts. Instead, they would be stuck with the framework of the OECTA deal, which also ends the banking of sick days.

None of this will strike most private-sector workers as unreasonable, given the province's fiscal woes and the generous raises teachers have enjoyed for nearly a decade. But the fact is that union leaders are more concerned with their members' perceptions than those of the general public. And to get their support for new contracts, they have to be able to show they accomplished something in negotiations.

With the passage of the controversial Bill 115 at the start of the school year, the Liberals (with support from the opposition Progressive Conservatives) made that all but impossible.

Beyond raising the temperature by giving government the power to impose new contracts and limiting teachers' right to strike, the bill decreed that any agreements reached by a deadline of Dec. 31 had to be "substantively identical" to the OECTA deal.

In the rare instances when this did not prevent negotiators from reaching agreements, it impeded their ratification.

While there were some mild compromises in deals reached between three school boards and the Ontario Secondary School Teachers' Federation, Education Minister Laurel Broten felt compelled to say they were not substantively different from the government's demands. Teachers subsequently rejected two of the three, and from that point, collective bargaining lost steam.

As for the Elementary Teachers' Federation of Ontario, the biggest and most militant of the unions, consensus may have been a remote possibility from the get-go.

In any event, the government appears to have abandoned hope of it some time ago.

So now, both sides are hurtling toward the unilateral imposition of new contracts at the end of the month.

And while rotating one-day strikes currently being staged by ETFO will be illegal past that point, the OSSTF's more damaging withdrawal of extracurricular supports – which could hurt high-school students – might well continue.

At the least, the unions will have an incentive to make schools dysfunctional until the Liberals choose a replacement for Mr. McGuinty at the end of January: to persuade the person who wins the leadership to invest in making peace.

Mr. McGuinty could yet decide to make his successor's life easier by offering some gives himself. But it would require an epic climb-down to make even a rocky road of what currently looks like a dead end.

Ontario parents: How will you cope with the teachers' strike?
December 6, 2012
York Region in the eye of storm over teachers’ rights
December 12, 2012 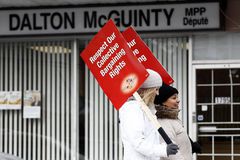 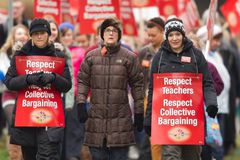 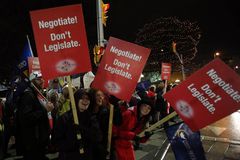 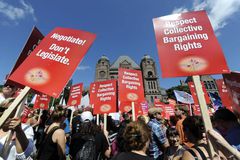 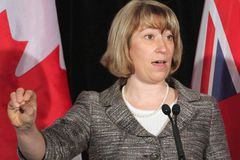