In the midst of her despair, Leah Parsons received an e-mail on Tuesday. It was from a boy – one of the four alleged to have sexually assaulted her daughter.

"If you don't mind, I would like to have a one-on-one conversation with you regarding your daughter," she says the boy wrote.

"I honestly think it's important we talk. I'm very upset about this situation."

Seventeen-year-old Rehtaeh had attempted suicide the previous week, and died two days earlier after being taken off life support.

Then, to help cope with her grief, Ms. Parsons posted a tribute page on Facebook, explaining that her daughter also had been bullied relentlessly, even by friends, after a graphic picture of the alleged attack had circulated on the Internet.

The girl never recovered from this, her mother says. And yet, as much she wants justice for what happened, she won't disclose who she thinks the boys are.

Not that it's a big secret.

Cole Harbour, the Halifax suburb where she lives, is a community of 25,000 – about 1,000 of whom are students at the high school Rehtaeh attended and where, it seems, a lot of people know the boys' identities.

But Ms. Parsons and her partner, Jason Barnes, are concerned about the possibility of vigilante justice. They don't want a repeat of the bullying.

Rehtaeh's story has triggered outrage across the country and around the world, as well as a national conversation about bullying and the perils of growing up in a digital age.

The Prime Minister has weighed in, the Nova Scotia government is reviewing its procedures, its justice minister is considering legislation governing the distribution of graphic images, and on Friday, the police announced that, after days of intense public pressure, they have received new information and are reopening the investigation.

There has been a vigil, and the funeral service Saturday is expected to be overflowing with mourners.

From all appearances, Rehtaeh was getting her life back together. There was a new boyfriend, who was helping her look for a job and encouraging her to go to school. Having left home to escape constant scrutiny, she had moved back and was reconnecting with old friends.

There was a memorable trip about a month ago to a tattoo parlour with girlfriends. She loved tattoos and that day had one depicting birds and feathers extended up her rib cage to her neck.

"A tattoo on your ribs … that hurts," says friend Ashley MacLean, 16.The others girls were impressed with Rehtaeh's stoicism – not a flinch or a grimace – but she was in pain.

The root of the problem

It started one weekend in November, 2011, at the home of a family friend in Eastern Passage, another Halifax community. Rehtaeh had gone with another girl. There were four boys, two of them brothers, and they drank vodka. An adult was there but asleep, and Rehtaeh's friend had left.

One of the boys snapped a picture on his mobile phone of Rehtaeh vomiting while allegedly being assaulted. The photo was circulated, portraying her as being promiscuous, and soon "everyone had it," her mother says.

Her uncle, Michael Parsons, says she started receiving crude text messages from boys propositioning her. "She was so hurt by what happened."

She and her mother went to police, and she gave a statement. But her mother says the investigation triggered even more bullying – and her friends turned against her.

Policing in Eastern Passage is an RCMP responsibility, but the case was handled by a joint squad, the Integrated Sexual Assault Investigation Team. The lead investigator was a Halifax Regional Police officer.

Ms. Parsons says she was disappointed that officials at Cole Harbour District High School did nothing to help.

Doug Hadley, a spokesman for the Halifax Regional School Board, says the school didn't want to interfere with the investigation. "The police explained that there may be a photo," he explains, "but no one at the school ever saw a photo or heard of anyone in possession of a photo."

Only when Rehtaeh left school a few days later did school officials met with her mother.

"That was the first time that they heard that there was a concern. It wasn't that they heard a concern and didn't investigate, they didn't hear the concern until after she had left the school," Mr. Hadley said.

Rehteah never returned to class; she broke down, her mother says.

Fearing she might harm herself, her parents admitted her to hospital and she spent six weeks there. She went to live with father in Halifax, where she attended Citadel High School and made new friends.

For a few months, she lived with the family of one of those friends, whose mother recalls, "She was a cute kid … she was in a good space at my house."

Still, life as a nomad wasn't easy for her. "The shuffling around, you know, her not being here, not being there, not having a stable existence ."

She continued to bounce around, living also with her aunt Maryanne in neighbouring Dartmouth.

Different medications were tried, too, and they didn't seem to work.

She wanted to feel better and not depressed, her mother says. "I'm trying," she would say. Her mother told her to give it time, to be patient.

Cole Harbour, where Rehtaeh grew up in a tidy bungalow with her mother and stepfather, was once farmland – known in the 1900s as the food basket for Halifax, famous for cabbage and sauerkraut.

Now it's famous for hockey superstar Sidney Crosby, a native son – and for racial unrest at the high school in the 1990s that attracted national headlines.

There were suggestions that Cole Harbour District, which has many black students, should close. But officials worked out a solution.

Lorelei Nicoll, the city councillor for Cole Harbour, says the biggest complaint she hears now from her constituents is about traffic, and people driving too fast.

Her friends say Rehtaeh changed after the alleged attack, and they lost touch while she was living in Halifax – in fact, the group of about 20 girls started to drift apart.

She was a "good girl," they say – an A student who liked to read, listen to music and hang out. She also loved dogs – and had a big heart. Ms. MacLean says Rehtaeh convinced her "not to do things to myself that I wanted to do."

The girls say they did not turn against her.

Tennille Mountenay, a friend since Grade 6, says the police talked to her after the alleged assault, although she hadn't been at the party that night. Rehtaeh had told her about it.

She feels the police "just dropped the case like it wasn't important at all."

Kelsey Patterson, another friend, agrees: "I don't really think it helped that the justice system was not taking her case seriously."

Ms. MacLean argues that no one listens to young people – "until you're dead or half dead."

After moving back in with her mother, Rehtaeh started seeing some of her friends again. As well, about a month ago, she began to date Mike Wells, 20, a student at the Nova Scotia Community College. The campus, where he is learning to be a pipefitter, is close to the high school she was attending.

He says he would pick her up in the morning at her house and drop her off at school. He knew about the alleged assault but the two never talked about it. "We pretended it never happened."

According to Mr. Wells, they liked to go to movies, and just days before her suicide attempt, he took her to a shopping mall to apply for jobs.

Last weekend, he was at the hospital while she was on life support, and now is devastated by her death. Now he drops by her house every day to visit her mother.

Leah Parsons says she doesn't believe her daughter wanted to die. Three weeks ago, Rehtaeh stopped smoking marijuana, which she had used to deal with her anger. She told her mother, "I have a plan and a goal." She wanted to be focused.

"But as soon as she stopped smoking pot, the anger started again," says Ms. Parsons, who suspects this may have led to the suicide attempt.

According to Ms. MacLean, "You try to do something to numb your pain like when you're feeling upset ... The steps get bigger and bigger each time. She went from something small, and it's that unsuccessful feeling you get when you actually don't get to numb it completely.

"So it's like you try and it doesn't work and you keep trying and trying and you go to bigger and bigger steps ..."

She and her friends wish they could have done more to help.

And the institution that, according to her family, did so little put up a sign on Friday – "Our school community grieves," it reads. 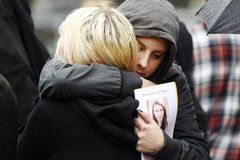 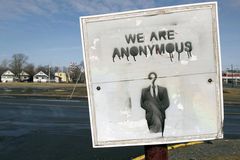 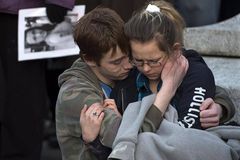 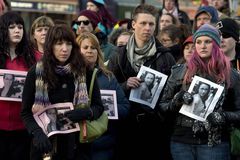 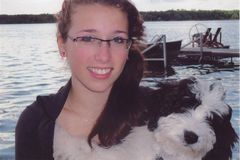 Follow Jane Taber and Tu Thanh Ha on Twitter @janetaber1 @TuThanhHa
Report an error Editorial code of conduct
Due to technical reasons, we have temporarily removed commenting from our articles. We hope to have this fixed soon. Thank you for your patience. If you are looking to give feedback on our new site, please send it along to feedback@globeandmail.com. If you want to write a letter to the editor, please forward to letters@globeandmail.com.
Comments are closed