When Jimi Akinsete first visited Estevan, Sask. last January, he wondered if someone had made a mistake. The 48-year-old physician was being wooed by the local health committee, whose members hoped he would move to the prairie city from Manchester and help alleviate a chronic shortage of local doctors.

"Having lived in South Africa and the U.K. for some years, I thought, 'I know what a city is,' " he recalled. And Estevan's population, a mere 11,000 according to the last census, seemed too insignificant to merit the status.

"But when I came back to settle in and work I realized, though it looks small, there's a lot going on," he said.

A dusty two-hour drive southeast of Regina, Estevan is on the cusp of a resource-fuelled growth spurt that's attracting newcomers from across the country and around the world. Added revenue from oil exploration in the area helped the health committee offer generous incentive packages to new doctors, including a $10,000 signing bonus along with housing and a rental car during their first several months in the city.

Dr. Akinsete said he feels welcome in Estevan: He found a church community and is looking forward to giving his kids an opportunity to grow up with more open space.

"I'm happy with the city," he said. "There's fresh air, the space is there for your children to play around. I think Estevan is a very nice place."

But sitting in his office one Friday afternoon, Dr. Akinsete admitted he's worried about where his family will live when they join him later this summer and the housing stipend he's living on runs out.

Houses in Estevan sell for much more than they would in other, similar-sized cities, with an average three-bedroom bungalow going for about $350,000 – and not many available at that. The city also has the second-lowest vacancy rates in the province, after Regina, with tenants in the city paying the highest average rent in Saskatchewan.

Estevan has access to a vast reserve of light crude and there are major upgrades either planned or in progress at two nearby coal-fired power plants. The rapid economic development is expected to boost the city's population significantly over the coming years, adding more pressure to a tight housing market and transforming the demographics of the city.

Already, nine out of 10 doctors in Estevan were trained in another country, about half of its construction workers hail from out of province, and everyone who works at the local Dairy Queen is Filipino.

"The biggest hurdle that people have come across in terms of trying to hire has been the lack of housing. We just simply don't have rental accommodation available," says Michel Cyrenne, who runs the city's chamber of commerce.

"Some people bring a trailer, winterize and stay in that, a lot of people are just staying with friends or relatives if they've been able to find a bed or couch or what have you."

Accommodation is so scarce that the province's trade union distributed flyers throughout Estevan last fall asking people if they'd consider renting a room or a basement to a construction worker. Some oil companies have bought up entire blocks in hotels, and about 200 workers are housed in a "man camp" – a cluster of well-furnished trailers in the city's southeast end.

But Mayor Gary St. Onge said the city is adopting a cautious approach to housing, adding he's taken some lessons from Fort McMurray – the community at the epicentre of Alberta's lucrative oil sands.

"They put up all sorts of places where people could stay," he said. "You know, they've had kind of a nightmare [with high-density housing]. And they said if you go slower it's better."

The rapid growth has sparked other concerns, as well. Mr. St. Onge said the city has seen an increase in crime, including a spike in the number of bar fights and a growing presence of drugs. And cocaine has become the drug of choice for many oil workers who are flush with cash from the job, he said. "There's no doubt, along with everything good there's usually something bad," Mr. St. Onge said.

The community sits on top of the giant Bakken oil patch, which the U.S. Geological Survey estimates contains as many as 4.3-billion barrels of oil. Although geologists discovered the oil in the 1950s, it's only in recent years that new, horizontal drilling and hydraulic fracturing technology have allowed companies to extract the crude more easily from between layers of shale rock. Since then, it's been a boon to the economy in southeast Saskatchewan and neighbouring North Dakota and Montana.

"The opportunity is phenomenal," said Martin Heitkoetter, an oil and gas contractor from British Columbia. "When I first came here, one of the first things that popped in my head was, 'I have never seen a greater diamond in the rough.'"

As locals snap up the highest-paying oil and construction jobs, employers in the service industry say it's increasingly difficult to find anyone from Estevan who's willing to flip burgers or sling beers. Temporary workers from Eastern Europe and the Philippines now staff Estevan's restaurants, bars and fast-food outlets, brought in to fill positions locals in the area declined to take.

"I think that the fast foods got hit first, because everybody kind of went into the construction and the oil fields," said Denise Vandenhurk, who owns the Dairy Queen with her sisters. "We used to have a stack of [local] résumés, but since 2007, that was the big year of dry. Nothing."

Agnes Tolda, 29, was among the first Filipinos Ms. Vandenhurk hired and is now a permanent resident in Canada. In addition to her full-time hours at Dairy Queen, she works two part-time jobs – at a law firm and a motel – and rents a room with a Filipino family.

Since she came here more than three years ago, she's managed to put her younger brother through school and bought a house for her family in Manila. She's paying for two cousins to go to college now.

"I feel proud of myself," she said quietly, looking up from the table at the restaurant. "That's the main goal for us in coming here. We don't just help our family members, we also help our extended family members."

Saskatchewan Economy Minister Bill Boyd said the southeast region, which includes Estevan and the neighbouring city of Weyburn, is a significant contributor to the province's revenue base. "It's driving a good portion of our economy right now," he said.

Mr. St. Onge, who was born and raised in southeast Saskatchewan, said this isn't the first time Estevan has experienced a spike in economic development.

"The oil rush basically began in Estevan in 1957," he said. "Of course, oil has a history of going up and down, in the price, and Estevan's population did that as well over the years."

But, he added, "this seems to be a longer-type boom." 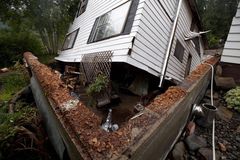