This is the story of three Sundays.

On the first, Constable David Ross and his wife, Rachael, met with their friends Mike and Elisabeth French at Hillside Baptist Church in northwest Moncton. They made plans to have dinner to celebrate, among other things, the upcoming birth of the Rosses' second son.

That was June 1. This upcoming Sunday, June 15, Constable Ross was to be on stage at the Hillcrest service, celebrating fatherhood once again as part of the church's men's choir on Father's Day.

But that won't happen. Constable Ross was one of three RCMP officers gunned down Wednesday night, sending Moncton into mourning and shock.

And so this Sunday, June 8, Hillside celebrated Constable Ross's life, as well as that of the other fallen officers, Constable Fabrice Gévaudan and Constable Douglas James Larche.

"We had no idea of the kind of script that would unfold after these last few days," Pastor Jerry Reddy told the crowd. "Our hearts are really devastated today."

Faith was an important part of Constable Ross's life, and he was beloved by his church. In early February 2009 – Superbowl Sunday, in fact – Mr. Reddy invited Constable Ross, new to Moncton, to share stories of his faith on the Hillcrest stage.

He called his job "a calling," Mr. Reddy said, and opened up that very day about the inherent risk of being a police officer – which he faced last Wednesday, responding to calls of an armed gunman in his own neighbourhood.

Less than two weeks after speaking on stage, Constable Ross would meet his wife through the same church, in a bible study group. They would eventually have a son, Austin; Ms. Ross is expecting another child in the fall.

Mr. Reddy called Sunday's service "a time for healing." He, an assistant pastor and a band walked the parishioners through a number of songs and scripture readings to guide them through their grief.

"There is a new awareness of gratitude in all of our lives," Mr. Reddy said. "For members of the [RCMP] Codiac detachment who, every single day, are willing to step up to the plate and are willing to make sacrifices for you and me. Every day single day on this planet is a gift."

He asked the crowd to pray for all those affected by Wednesday's tragedy, which left three dead, two injured and a huge swath of Moncton on lockdown for 30 hours. This included, he said, the family of Justin Bourque, who has been charged with three counts of first-degree murder and two counts of attempted murder.

The Bourque family, he said, "is probably suffering in unbelievable silence and shame. … They suffer as we all suffer."

Constable Jim Shields, with the RCMP's Cole Harbour detachment, came to the service from Nova Scotia. "As a fellow believer, and on behalf of the RCMP, I wanted to show my support," he said.

Ms. French, a longtime friend of Ms. Ross, said the tragedy showed that "every day is a gift," and served as a reminder of how much people take for granted.

"If the shooter had only know the type of man that Dave was," she said. "David and those other two RCMP officers would have given their lives for him if his life was in danger." 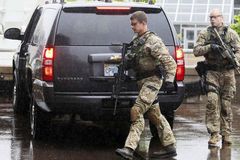