On the way to work one day, RCMP officer Curtis Barrett spotted a dump truck and thought about slamming his car into its heavy steel and ending his life. It could all be over in 10 seconds, he thought.

Corporal Barrett, who was a constable then, was struggling with the aftermath of gunning down Parliament Hill attacker Michael Zehaf-Bibeau.

For nearly a year, almost no one knew that he had shot Mr. Zehaf-Bibeau in the head on that terrifying and chaotic morning of Oct. 22, 2014. Adulation for stopping the gunman, who had slain soldier Nathan Cirillo at the National War Memorial, went to Kevin Vickers, then the sergeant-at-arms. Mr. Vickers had also fired toward Mr. Zehaf-Bibeau, as had another five police officers, according to an Ontario Provincial Police report.

The lack of recognition and mental-health support sent Cpl. Barrett into a spiral. At home for two months after the shooting, without counselling and scant contact with the RCMP, the father of two felt isolated. His relationship soon collapsed and friendships frayed.

"Nobody from my organization was calling me to say, 'Good job,'" Cpl. Barrett told an audience at a mental-health conference north of Toronto on Friday. "I went from being, … 'I'm a rock-star hero,' to I feel like driving my car into a truck."

Cpl. Barrett returned to work, but his mental health continued to deteriorate. About a year after the shooting – and not long after he contemplated ramming his car into a dump truck – Cpl. Barrett was put on medical leave and sent to a mental-health clinic in Ottawa. Diagnosed with post-traumatic stress, he has become an advocate for transforming how the country's largest police service supports its officers after traumatic incidents. He believes acknowledgment and communication are key to ensuring officers don't feel abandoned.

Healing from mental distress takes support and time, he added. Cpl. Barrett, who has returned to work, was awarded the Star of Courage last year for his actions on Parliament Hill. Presented by the Governor-General, the medal recognizes acts of courage in the face of great peril.

"It's such a simple thing to do, yet so very difficult for so many supervisors and managers to actually do, because everybody is focused on operations rather than the humanity of the job," said Mr. Savoia, who struggled with PTSD after responding to the murder of Tema Conter in 1988.

RCMP spokesman Harold Pfleiderer said the police service is working to ensure that critical-incident debriefs are happening in every detachment. The police service also recently released an aftercare guide for managing stress related to traumatic incidents. The goal of the guide is to reduce the impact of normal reactions to difficult calls, such as shootings and car crashes, and to better aid employees and their families.

"We continually make RCMP leaders and employees aware that psychological health problems are not anyone's choice, and that recovery and management are possible with appropriate treatment and support," Sgt. Pfleiderer said in an e-mail.

Cases of PTSD are on the rise in the RCMP as awareness of the mental illness increases. Government records obtained by The Globe and Mail under the access-to-information law show that 1,244 RCMP officers were being treated for PTSD as of March, 2016, nearly double the number five years earlier. Nearly 2,000 retired or released Mounties are also coping with PTSD.

Cpl. Barrett declined to speak with the media after his speech. Sharing his story before hundreds of people took a toll.

He told the audience that therapy has helped him heal and realize that it wasn't just the shooting that was haunting his mental health. It was the cumulative effect of the job – of responding to car crashes and drownings, to being involved in a fatal pursuit and a swarming as a young officer. His vehicle was surrounded by a group of about 70 in a community north of Fort St. James, B.C. He faced a charge of dangerous driving as a result of that 2006 incident, but said he was cleared in the case.

He said he was given no mental-health support after the swarming.

"Nobody followed up with me. There was no debriefing. No counselling," he said. Still, he is optimistic the system and the RCMP can change. 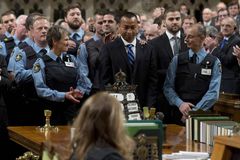 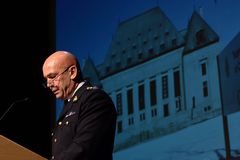