Social media experts say two threats against Ontario universities in the past few days are symptoms of an online "echo chamber" that creates a breeding ground for hoaxes, but note the real world penalties for such pranks can be severe.

The threat against Laurier, posted anonymously on the forum 4chan, triggered a lockdown that paralyzed the Waterloo, Ont., campus for nearly six hours. The lockdown started at about 6 a.m., and was lifted at about 11:30 a.m., said Kevin Crowley, a Wilfrid Laurier University spokesman.

There was no lockdown at McMaster but police said there was increased security on campus.

Police said they considered the Laurier threat credible, in part due to its similarity to a warning posted before the Oct. 1 shooting rampage at an Oregon college that resulted in 10 deaths, including the gunman.

A photo shared on Twitter showed a 4chan post that featured an image of a frog holding a gun and read: "Don't go to laurier science building hall tomorrow. happening thread will be posted in the morning."

A post that preceded the Oregon shooting featured the same image, and read: "Don't go to school if you are in the northwest. happening thread will be posted tomorrow morning." And just a week ago, the University of New South Wales in Australia was similarly threatened on 4chan.

"We're in a cultural moment now where it feels very possible that someone may come and do violence on a university campus," said Aimee Morrison, a professor who specializes in digital communication at the University of Waterloo, just down the road from Wilfrid Laurier.

"So even if someone is going on 4chan to make threats for the [sake of personal amusement] to see what kind of payoff they can create, it does in fact inspire real terror for the people who may be affected," she added.

But the perpetrators of these threats also face real-world consequences.

Metropolitan Police in London, England, charged Daniel Ransem, a 22-year-old student, for allegedly posting the threat against Laurier, and Hamilton police traced the threat against McMaster to a 16-year-old boy in Petersburg, Ont. The investigation into his threat was continuing.

London police would not say whether the suspect had any connection to Laurier, or even to Canada.

Mr. Ransem was to appear in a London courtroom on Monday to face the allegations. He was charged under the Malicious Communications Act, a British law that prohibits sending threats with the intent to cause distress or anxiety. The act specifically refers to online communication. The charge carries a jail term of up to six months and a fine of up to £5,000, or nearly $10,000.

There are similar anti-threat laws in Canada, said Brett Caraway, a professor at the University of Toronto and expert in Internet law and social media. In Canada, uttering threats can carry a two-year prison sentence or $5,000 fine.

But despite potential consequences, Prof. Caraway doesn't expect the threats to die down any time soon.

"An individual who derives pleasure from making threats of violence is not thinking rationally to begin with," he said.

And 4chan acts as a sort of breeding ground for these sorts of hoaxes.

"The adolescent 'male-ness' of the original user-base combined with the anonymity just [results] in a prankster's dream site," Prof. Caraway said.

There's a culture of one-upmanship on 4chan, Prof. Morrison said. So what may have started as a series of innocent pranks has become more sinister. 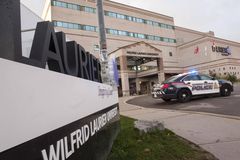 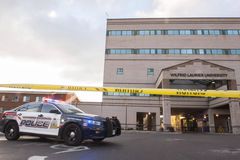