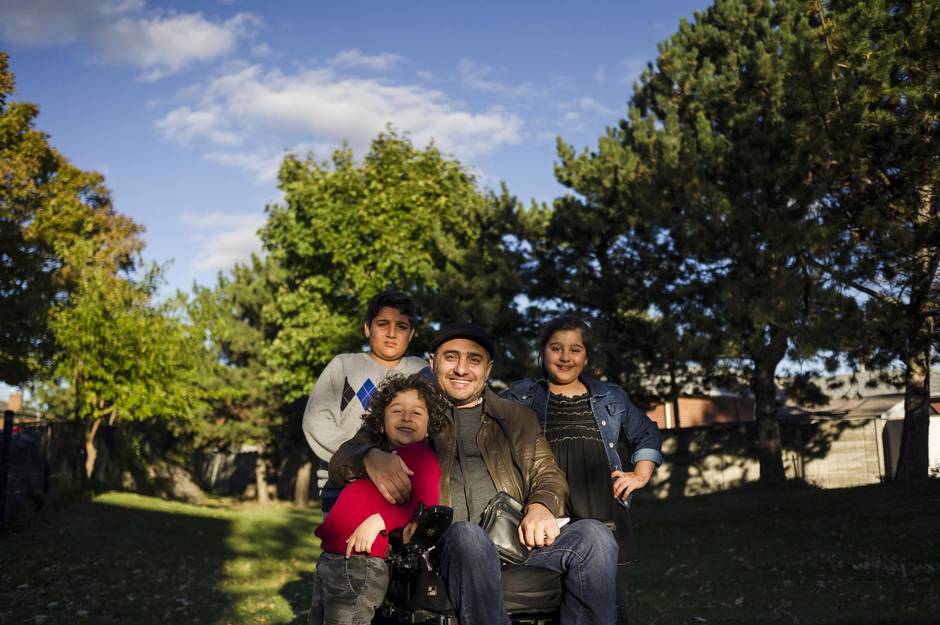 Mohamad Alhajabdullah poses for a portrait with his three children (from left) Bashir (9), Abdulkarim (10) and Abeer (9) in a park outside his North York residence on Thanksgiving Sunday, October 9, 2016. (Christopher Katsarov for The Globe and Mail)

It was far from a Norman Rockwell Thanksgiving, but, for Mohamad Alhajabdullah, the sentiment was the same.

There was a mass gathering, a big meal and an intense feeling of gratitude. In place of turkey, there was butter chicken; rather than Brussels sprouts, dahl; instead of pumpkin pie, a cup of sweet almond-based kheer.

At the head table sat the Caliph, Hazrat Mirza Masroor Ahmad, spiritual leader to nearly 20 million Ahmadi Muslims worldwide. He was visiting Toronto this week for a conference of Ahmadis that attracted more than 25,000 worshippers from across the continent. On this Thanksgiving weekend, he shared a prayer and meal with his believers, members of a Sunni offshoot that adamantly opposes the Islamic State and other extremist groups, and advocates for universal human rights.

As thankful as the tens of thousands of people in attendance were to break naan with His Holiness, Mr. Alhajabdullah’s appreciation ran deeper than most.

“For Ahmadi Muslims, he is the highest, like the pope,” said Mr. Alhajabdullah, seated in a mechanized wheelchair for the sermon and meal at Mississauga’s International Centre. “He did not visit Syria. There would be no way. … In Canada, there is safety and rights and freedoms. I have read all about this. In Syria, right now, it is more difficult.” 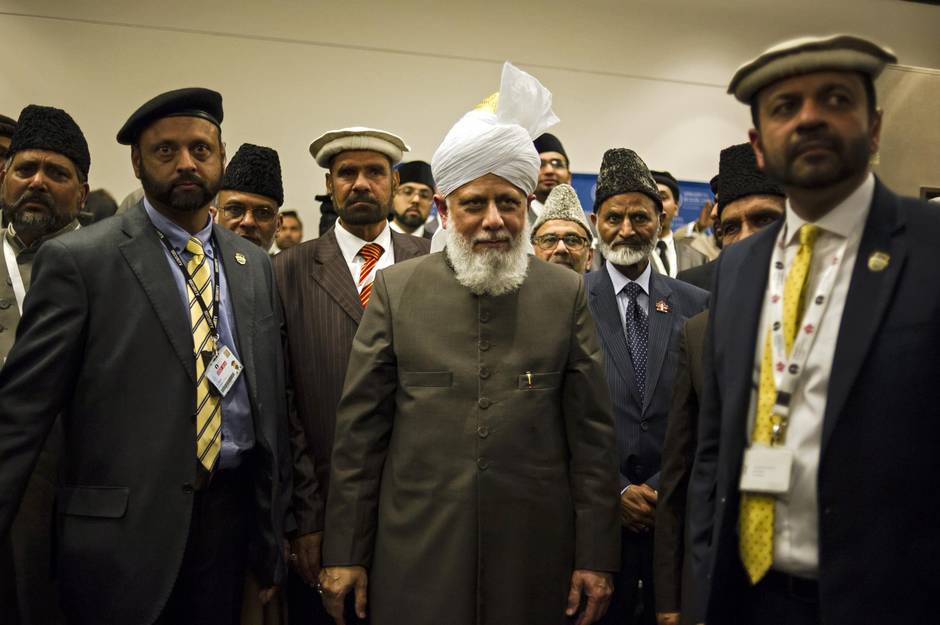 This is what he’s most thankful for as he reflects on his family’s first 10 months in Canada – rights and freedoms, for himself, his wife and their three children.

He knows of what he speaks. It wasn’t so long ago he and his family had neither.

On April 30, 2013, Mr. Alhajabdullah was walking to work at the power company in Damascus when he was lifted off his feet by a bright hot light and tossed into the street face down. He lifted his head. All he could see was blood and motionless bodies.

The paramedics ignored him at first. They assumed he was too close to the blast to survive. Some time passed before one approached him.

“Are you alive?” a medic asked. 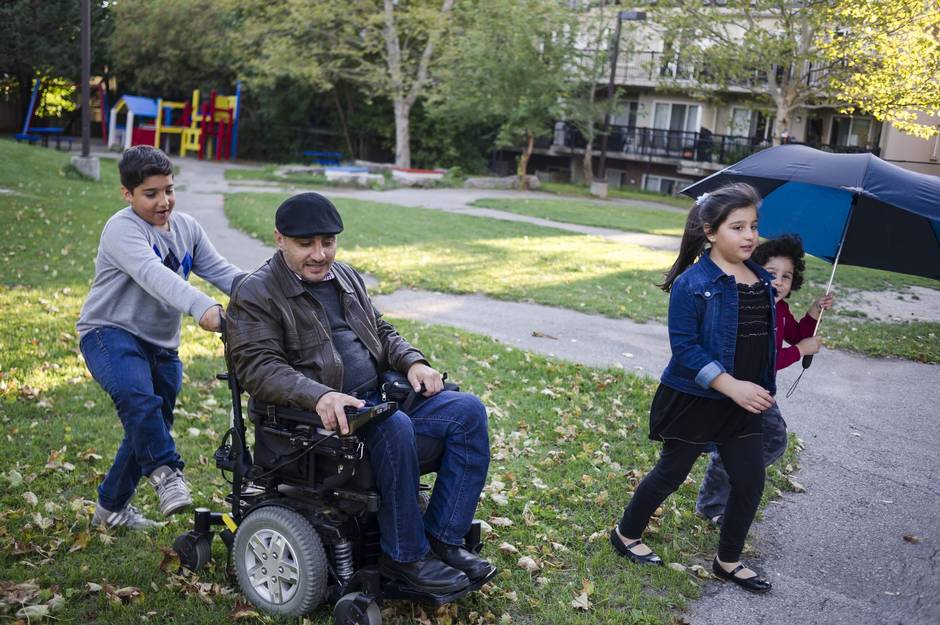 Mohamad Alhajabdullah, a Syrian refugee, and

“Yes,” Mr. Alhajabdullah responded. “But I can’t move.” More than 14 people died in the bomb blast. The government blamed a terror group.

It was to be the beginning of the end of his family’s time in Syria. He remained bed-ridden for a year while the country around him spiralled deeper into civil war. Crackdowns on Ahmadis worsened. He prayed for their well-being. It was hard enough raising his two sons and daughter in a war-torn country when he was able-bodied. When medical staff told him he’d broken his back and severed a spinal nerve, he realized that escape was their only option.

“I could no longer keep them safe,” said Mr. Alhajabdullah. “We needed to leave. The country was bad and getting worse.”

The family found a special car with a bed that could spirit them out of Syria and into Turkey. Life was better, but barely. The country had already received some 1 1/2 million Syrian refugees. Any capacity to accommodate the surge had been long ago overwhelmed. Schools and employers alike had no room for the newcomers.

“I wanted a place where my children could study, where there is freedom of choice, where there is no extremism,” he said. He also wanted an English-speaking country. His English wasn’t great, but his German or Swedish was non-existent. 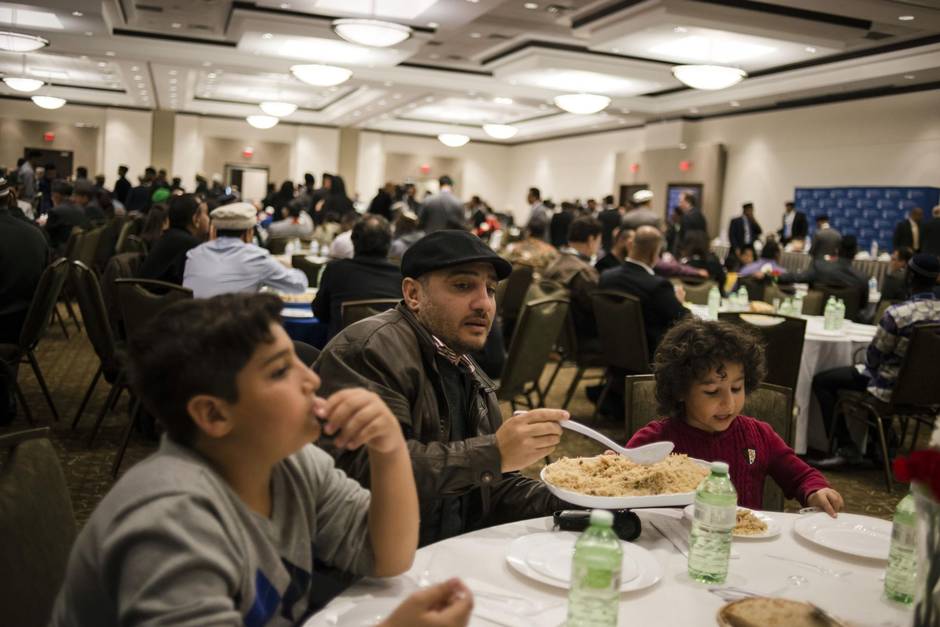 Mohamad Alhajabdullah and his two sons, Abdulkarim and Bashir have a simple lunch at a reception for V.I.P.'s. during the Caliph's visit. (Christopher Katsarov for The Globe and Mail)

They arrived in Toronto on Nov. 30, 2015. They spent their first week adjusting to the new time zone, their sleeplessness adding to a sense of disorientation. Their sponsor, a relief organization called Humanity First, found them a seventh-floor apartment in a North York building for Ahmadi Muslims. They tried going outside only to realize they didn’t have adequate clothing.

“Some people here, they offered us winter clothing and we turned them down. We thought we had cold-weather clothing,” said Mr. Alhajabdullah. “We found out cold weather in Syria and cold weather in Canada are different things.”

Several area organizations stepped in to help. Soon they were well-dressed and the three kids were thriving in school, going from little English to total comprehension in about six months. Rather than dwell on survival, they think about what they want to be when they grow up. Abdulkarim, 10, wants to be an airline pilot. His sister, Abeer, 9, wants to be a doctor. And the energetic Bahir, 5, has his mind set on a basketball career.

Their parents were set up with daily English classes as well as specialized driving lessons for dad.

But as of July, Mr. Alhajabdullah remained troubled by one thing. His boys were a rambunctious duo. He tried as best he could to impart lessons of fairness and justice – principles all Ahmadis hold dear – but his wheelchair made it difficult to break up fights and arguments between them. 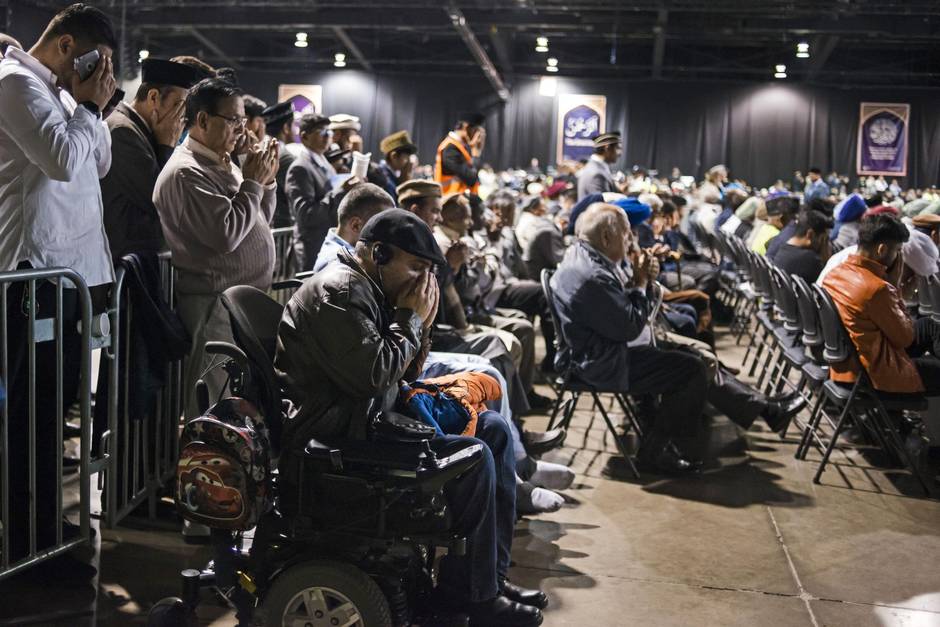 Mohamad Alhajabdullah takes part in a mass prayer during Caliph Mirza Masroor Ahmad visit to Mississauga on Sunday October 9, 2016. (Christopher Katsarov for The Globe and Mail)

On July 11, he saw a powerful teachable moment. On a scorching afternoon, he and his eldest son waited 90 minutes for a public bus. In that time, six TTC buses roared past, the drivers signalling that they were too full for more passengers. Father and son were dripping sweat in the 30-degree heat. They were used to this kind of treatment in their previous homes.

“These days, in Syria and Turkey, if you’re hungry or cold, nobody will help,” he said. “I studied all about rights and freedoms in Canada. I knew things were different here. I needed to give my son a lesson.”

His eyes well with tears when he talks about what he did next.

“The sixth bus came. It was a woman driver. I told her, ‘Sister, please I’ve been here one-and-a-half hours.’ She said she couldn’t do anything. I rolled in front of the bus and I turned off my chair.”

It was a standoff. For 10 minutes, he stared down the bus. Some passengers yelled that he was making them late. Others cheered them on. Finally, one man stepped off and offered to take Mr. Alhajabdullah in a wheelchair-accessible cab. On account of the heat, he agreed. 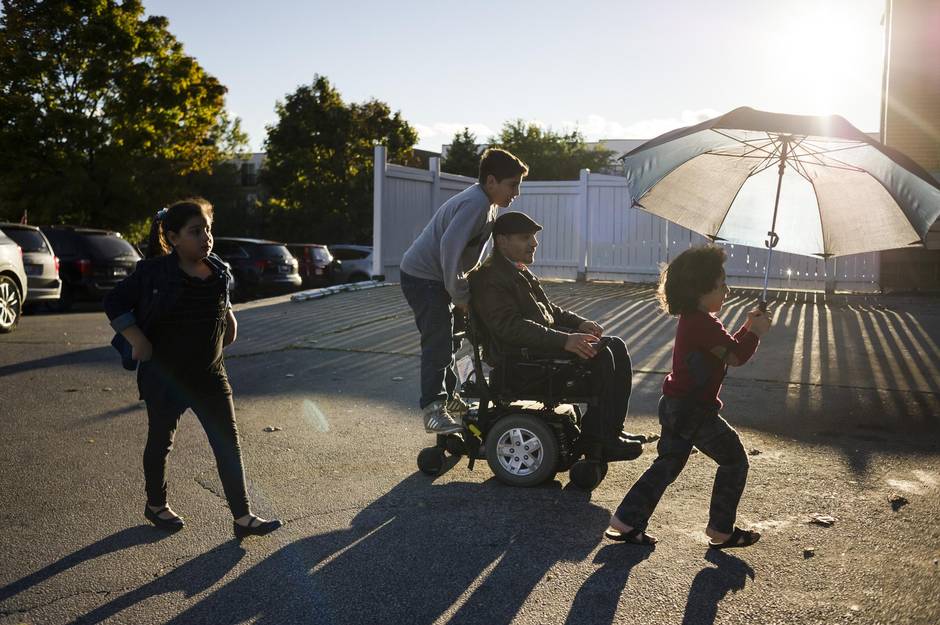 Mohamad Alhajabdullah and his three children on their way back from a park outside his North York residence on Thanksgiving Sunday, October 9, 2016. (Christopher Katsarov for The Globe and Mail)

The TTC later said it had erred in failing to accommodate Mr. Alhajabdullah. “I had to give my boy this lesson,” he said. “No matter how sick or weak you are, nobody can rob you of your rights. This is Canada.”

Their affection for their new home grew that day. Last week, the Alhajabdullahs submitted a short video to a Thanksgiving contest put on by Mes Amis, one of the volunteer groups that has helped them settle in Canada. One by one they looked into the camera and expressed what they were most thankful for this year. The kids went with “good English,” “nice people in Canada” and “school.” The father said he was most grateful “for a safe place in Canada.”

Nearly three years after leaving a homeland where they were actively persecuted, the Alhajabdullahs sat a few metres from their spiritual leader. It was an interaction they could only dream of in Syria. Shortly before the Caliph wrapped up his sermon, Mr. Alhajabdullah’s wife, Fatmeh, rose with their daughter to join other volunteers who were preparing and serving food in another room.

As the Caliph and his worshippers fell silent for a moment of personal prayer on Sunday, Mr. Alhajabdullah’s thoughts no longer went to his immediate family’s well-being. “I asked Allah to keep my parents safe in Syria,” he said. “We are okay now. We are here and we have thanks.”