On the night he died, Tim Bosma asked his wife, Sharlene, if he should go on a test drive with two men who wanted to buy their pickup truck. He'd rushed home from his mother's 60th birthday party to clean the Dodge Ram and was frustrated that the potential buyers were late.

"I said, 'Yes, you should because we want the truck to come back,'" Ms. Bosma testified on Monday, before dissolving into tears on the opening day of the first-degree murder trial of Dellen Millard, 30, of Toronto, and Mark Smich, 27, of Oakville.

Both have pleaded not guilty.

Within hours of leaving with the men, Mr. Bosma, 32, was dead – shot in the cab of his truck and then burned, Crown attorney Craig Fraser told the packed Hamilton courtroom as he laid out a gruesome trail of forensic evidence he says explains the young father's mysterious disappearance on May 6, 2013.

The Dodge Ram was recovered six days later in a trailer parked in Mr. Millard's mother's driveway in Kleinburg, Ont., north of Toronto. It had been stripped of its carpet and front seats, with the charred seats also found in the trailer, Mr. Fraser said in his opening address to the jury.

The Crown told the court that the evidence shows Mr. Bosma was shot at close range while seated in the passenger seat. The front passenger window was shattered, a spent .380 gun cartridge was found inside and forensic investigators found Mr. Bosma's blood and gunshot residue all over the truck, Mr. Fraser said.

Mr. Bosma's blood was even found on the undercarriage of the pickup.

The Crown submitted that Mr. Bosma's body was taken to an airplane hangar in Waterloo, Ont., owned by Mr. Millard. Mr. Fraser said surveillance video, obtained from a recorder found in the home of Mr. Millard's girlfriend months later, shows him and Mr. Smich "igniting" a livestock incinerator called The Eliminator at about 1:30 a.m. on May 7, about 4 1/2 hours after Mr. Bosma left his Ancaster, Ont., home with the two men.

That incinerator was later found on a rural property also owned by Mr. Millard in Ayr, Ont., near Cambridge. Inside, investigators found human bones and what is believed to be a human tooth, along with Mr. Bosma's blood, court was told.

The Crown will also contend that Mr. Smich disposed of the gun by burying it in a forest.

Mr. Fraser said the Crown will present evidence that proves the two accused had been planning to steal a Dodge Ram pickup truck and that Mr. Millard had urged his girlfriend to convince a friend, a key Crown witness, to change his testimony.

"If he knew his words were going to get me a life sentence, he'd change them," Mr. Fraser said a jailhouse letter from Mr. Millard reads. "Show him how he can and he will change them."

Mr. Millard's girlfriend, Christina Noudga, is charged with being an accessory after the fact and will face an upcoming trial.

Sharlene Bosma testified that her husband was eager to sell the truck, advertised for $24,000, to alleviate some financial hardship. It had cost the young parents of a now-five-year-old girl "a fortune" to fix over the course of more than a year, she said.

Her husband was initially frustrated that a man who made arrangements to look at the truck that Monday night was late. "He said, 'Who comes this late to see a truck?'" she said.

But Ms. Bosma said he left for a test drive with a big smile, telling her he would be right back.

During her testimony, in which she painted a loving, touching and sometimes funny portrait of her husband, Ms. Bosma never referred to the two accused by name. Instead, she called Mr. Millard "cellphone guy" because she believed he was the one making contact with her husband.

Mr. Smich, whom she called "the other one," said nothing when the pair came to their house, she said. In fact, she found him "sketchy" because he did not make eye contact and stood off to the side, with his hands shoved into the pockets of his hoodie sweatshirt.

The trial, before Ontario Superior Court Justice Andrew Goodman, has long been anticipated in Hamilton, which has been gripped and shocked by the saga since Mr. Bosma went missing.

The courtroom, which seats 150, was jammed with friends and family of Mr. Bosma, interested members of the public and the media. An overflow room showing a courtroom video was also full. 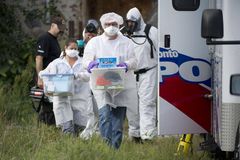 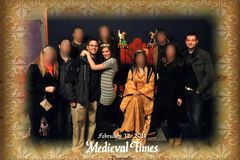 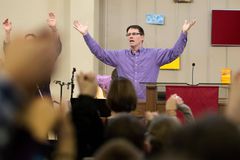