Haille Bailey-Harris
Contributed to The Globe and Mail
Published October 21, 2010 Updated May 2, 2018

Haille Bailey-Harris is a student at Toronto's Riverdale Collegiate Institute.

Every time I hear about another study telling me that, as a boy, especially a fatherless boy, I may be destined to fail in school, it makes me cringe and more determined to prove the researchers wrong.

I'm one of those statistics discussed in the studies The Globe and Mail has written about. Raised by my mother alone, I'm a fatherless boy (well, that isn't quite accurate - he's apparently alive and well, but I haven't seen him in more than a decade). I'm also an avid video gamer so, according to the research, I should be failing in school, a non-reader, and basically a loser.

And though not discussed in the articles, I have what other studies have said is also a risk factor for dropping out of school: I'm black.

Hell, I should just throw in the towel! It worries me that other fatherless kids might think it's hopeless, too.

Although I don't think the studies are always right, I agree that growing up without a father (especially if your family is also poor) can be a real challenge. And since we know this, we should be working hard to intervene before failing is a done deal.

That's what my mother did. And though I have lots of time yet to screw up, today, I'm a happy, well-adjusted 16-year-old who really loves to read, already has a university scholarship waiting and is a published writer.

It wasn't always like this, though. When I was 8 or 9, I was bullied as the only black kid in my class. I was full of anger and getting into lots of trouble. I felt really lonely and lost after my father left. My mom was called to my school all the time, and she kept telling me how afraid she was for me.

So one day, she went to the principal's office and the two of them developed a plan, a sort of intervention to ensure I didn't end up as one of those statistics. This was the plan:

Find other role models. My mom made sure I was surrounded by very positive adults, male and female. I'm lucky to have two big brothers, who've been great father figures, and one of my uncles sort of took me under his wing. And I was lucky to have teachers, two women in particular, who really believed in me.

Create a community family. Big Brothers and Big Sisters provided a great big sister for me. We waited for a big brother for a year, but there weren't enough men willing to join up, they said. And now I have a mentor through their program, too. My mom also enrolled me in programs offered by the school, community centre, church and public library that all helped me to feel accepted.

Do community service. My mom and I volunteer in our community because giving back makes you feel good about yourself. I've already finished the required volunteer hours to get my high-school diploma by helping kids read at the public library, and working at a homeless shelter and for the Raptors Foundation.

Eventually, with the help of our battle plan, I grew wiser and realized I had great potential (as do all children, no matter the circumstances). I started to try harder in school, I found better friends and became a role model myself. Suddenly, before I realized it, my life was right side up. 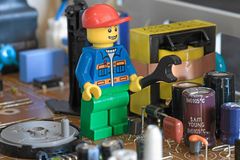