While the debate rages over how social media companies such as Facebook should use facial detection and recognition tools, the technology has quietly crept into institutional life across Canada, for functions ranging from gambling control to bank fraud and police investigations. Beginning next year, Canadian "e-passports" will contain a chip that can be used with facial recognition technology; even the Bay has experimented with it as a way to prevent shoplifting.

"I think there is a tendency to over-rely on technology," said David Fraser, a lawyer who specializes in privacy issues. "It has the potential to slip from one purpose to the next so easily no one stops to ask why or what are you doing with it."

By the end of this year, cameras linked to facial recognition software will photograph everyone who walks through the front doors of a casino run by the Ontario Lottery and Gaming Corporation as part of a program to keep 15,000 self-identified problem gamblers out.

At Ontario casinos, which get 40 million visits a year, such a large surveillance system has the potential to build an extensive database. To prevent abuses, the OLGC worked with Ontario Privacy Commissioner Ann Cavoukian and University of Toronto researchers to design a system that offers "gold standard" privacy protection.

"Privacy is the default condition," said Ms. Cavoukian. "It is a very effective program."

Nineteen of 27 casinos are already using the technology. Facial recognition software instantly scans photographs taken by a dedicated camera as visitors pass by a security desk, looking for matches with pictures of gamblers who have put themselves on a self-exclusion list. If a match is found, a silent alarm goes off, the matching photos pop up on a computer screen and security guards compare them. If they are satisfied with the match, a guard approaches the visitor and asks for identification before escorting them out of the building.

Photographs of people who are not on the self-exclusion list are instantly discarded. Each photo already in the computer's database is biometrically encrypted and can only be unscrambled if the person in the picture is physically present.

The Canadian Bankers Association has used facial recognition technology to investigate debit card fraud since 2008. Last summer, it also offered its services to Toronto Police officers tracking down suspects wanted for violence or vandalism during the G20 summit. CBA security chief William Crate said investigators helped identify between 10 and 20 suspects and that a CBA investigator has already testified at the preliminary hearing of one of the protesters.

Mr. Crate said facial recognition technology has become an important tool in investigating organized crime, which is often the work of gangs that travel across cities or around the country.

Investigators with the Bank Crime Prevention and Investigative Office, the CBA's investigative body, compare video images captured at bank machines or in bank lobbies across Canada. Mr. Crate said the method does not breach customers' privacy because investigators automatically discard images of ordinary customers. They keep only videos taken while it is obvious a crime is being committed. Software compares the images to help tie various crimes to the same people. Once they have built a case, investigators turn the images over to police, Mr. Crate said.

Investigators occasionally compare these images to publicly available photographs, such as pictures published in a newspaper, to help them identify a suspect. They also work with police mug shots, and recently used facial recognition software to link a man to 10 bank robberies.

ICBC introduced facial recognition technology in 2008 to counter identity theft and fraud. The software captures driver's licence photos and analyzes facial features, such as the size and location of cheekbones and the distance between the eyes, that do not change with age. The photos are then matched to existing ones in the database.

In February, ICBC upgraded the system by adding the capability to import images from an external source, such as the police.

Citing a case where a man who had been deported from Canada had returned to obtain a driver's licence under a different identity, spokesperson Adam Grossman said, "Sometimes our investigation goes outside our realm here in B.C. Potentially down the road, there could be a different agency that could provide us with evidence."

But shortly after the Stanley Cup riot occurred last month, ICBC offered to lend its facial technology software to help police identify rioters. Vancouver police confirmed on Friday that it has not accepted ICBC's help.

In June, Mr. Grossman said this approach does not breach privacy laws because the police would not have access to ICBC's database.

But on Friday, B.C.'s Information and Privacy Commissioner announced it will investigate whether ICBC's offer of technology to help police complies with privacy laws. 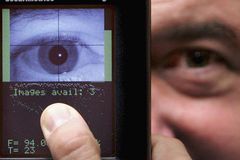 Man loses license for looking too much like another driver
July 18, 2011 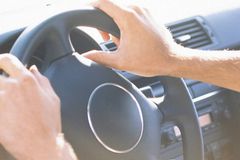 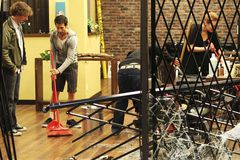 Opinion
It's possible to have both facial recognition and privacy
July 27, 2011 Privacy watchdog probes ICBC for use of facial-recognition technology
July 22, 2011 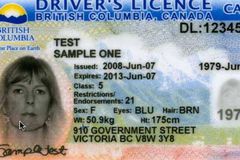