This article was published more than 10 years ago. Some information may no longer be current.

Canada accepts roughly 250,000 immigrants each year. But for newcomers, resettling can be daunting: You might be told your previous work experience no longer counts. Or you might lack the personal connections to find the best opportunities. Those struggles can, however, make the triumphs all the more precious. In this interactive gallery, immigrants from across Canada share the happiest moments and toughest challenges.

Alfonso RodriguezBookseller. Immigrated from Mexico 12 years ago, living in Montreal.

The biggest challenge that I have faced since arriving in Canada is a reluctance on the part of the locals to see me as one of their own. At times I ruefully joke to myself that Canada's description of itself as a tolerant society means exactly that: You are tolerated, which is different from being accepted."

It is extremely rare in a Communist country that you own a home. I will never forget the pride my parents had when we bought our first house – it wasn't much, but it meant the world to us. We felt we belonged. To immigrants, owning a home is rarely a financial decision. It is land. It is a piece of something you own that cannot be taken away from you."

For a long time I considered myself an Indian in Canada ... I had a sense of heaviness and gravity in my personality. Slowly this began to include leisure and fun activities, and a sense of balance and lightness filled my life. These were traits I identified as quintessentially Canadian."

I originally came to Canada as a live-in nanny, which I did for seven years. I loved that job, although it was exhausting. While still working, I started studying for my undergraduate degree and after graduation I made a switch to working in finance ... I think these steps would have been a lot harder for an immigrant to Europe – those immigrants would likely have to overcome many more biases to get where I am today."

John FurlongChair of Vancouver Whitecaps. Immigrated from Ireland 38 years ago, living in Vancouver.

When we were in Prague presenting our credentials to the International Olympic Committee to be accepted as the 2010 host city for the Winter Games, I remember thinking to myself: I probably live in the only country in the world where somebody of another culture, of another accent and partially of another language would have the right and the honour to do what I was about to do the next day, which was present Canada's case for the Games. There is perhaps no other country in the world where that would happen. But in Canada, not only does that happen a lot, it is simply a matter of what it is to be Canadian."

Canada needs more immigrants. In some regions and industries, Canada is already short of educated, skilled workers. With birth rates low and lifespans ever longer, those problems will deepen in the future. Worse, our social safety system could become unsustainable. A possible solution is to expand immigration for "economic" migrants – those selected for their skills – to as much as double current levels. This would raise annual immigration to nearly 400,000 by 2016.

With baby boomers heading for retirement, eventually there will be only two workers for every senior citizen. This increases the burden on workers for seniors' pensions and other social programs, slows growth and makes labour shortages even more dire.

Canada's working-aged population per senior citizen over time, and the same ratio by province

The small community of Steinbach, Man., is a microcosm of Canada's dilemma: In the 1990s, it lacked the population to fill needed jobs, then a new provincial program helped it draw more immigrants.

Today, Steinbach is transformed, having grown by 60 per cent, with newcomers from 40 countries. The town has pulled together to help integrate the new residents.

Canada is facing a looming labour shortage. A million jobs could be going unfilled across the country by 2021 because of a lack of qualified candidates. Sectors facing critical shortages of skilled labour include mining, oil and health care. Alberta is already facing labour shortages and the province anticipates a deficit of 114,000 jobs by 2021. In Ontario, by 2031, the shortfall in skilled labour could be as high 1.8 million according to an analysis of Ministry of Finance data.

How big a country should Canada be? The current trajectory (medium growth), shows a total population of 52.3 million by 2061, with annual immigration at 406,700 (a rate of 0.75 per cent). Under the high growth scenario, the rate would be 0.9 per cent annually. Doubling economic immigrants would increase the rate to slightly more than 1 per cent. 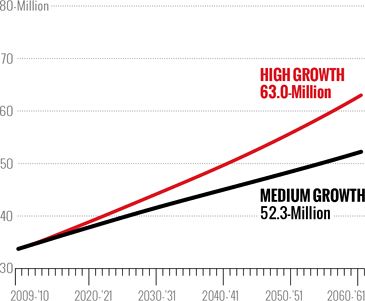 Canada's population growth already depends almost entirely on immigration. Following current trends, projections show an annual increase of 386,400 people by 2061, made up of 346,800 net immigrants (406,700 new immigrants minus 59,900 emigrants) and 39,600 net new births. Only about 10 per cent of growth will be due to new births. 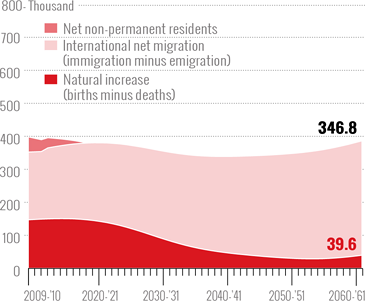 Canada has a rare level of national consensus on the value of immigration. The government says it does not want to disrupt that peace. But arguably that consensus is the very reason immigration numbers could increase. How do you see the present and future of immigration in Canada? Plot your position on the Globe's interactive chart, and see how it compares to other people's opinions. How is it affected by your personal experience?

Vote: What is your attitude toward immigration? 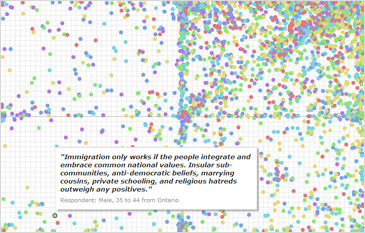 Just how important is immigration to the future of Canada? Chart your perspective, and compare your opinion to others'.

It can take years to get in. Some professionals arrive only to be told their qualifications aren't recognized. Unemployment and underemployment are far too common. To address some of these problems, Citizenship and Immigration Minister Jason Kenney is placing more emphasis on language skills, credentials assessment and job offers for newcomers, as well as creating a nimbler application process. But will these changes make immigrants better off?

Immigrant incomes are falling behind

Since the 1970s, new immigrants overall have fared worse economically than their predecessors. And they are taking longer to catch up to the average Canadian. The graph below shows how far short of Canadian earnings immigrants fall.

While experts, think tanks and bureaucrats put forth their ideas on how to make immigration work better, individual innovators are moving ahead and making the changes they see are needed. From community members with fresh approaches to mentoring and integrating newcomers, to employers who recognize that a diverse work force broadens a company's vision and knowledge, these are the people building tomorrow's Canada today.

Several trends in immigration in the past couple decades stand out. In every province, the proportion of economic immigrants (skilled and educated workers, entrepreneurs and investors and those with Canadian experience) has increased significantly, while family reunification has declined; more are moving West rather than flocking to Ontario and Quebec; and the primary source countries are no longer the U.K. and the U.S., but the Philippines, India and China.

Comparing immigration source countries from 1970 and 2010 and how key measures of immigrant demographics and settlement patterns changed between the 1986 and 2006 census periods.

For years Canada has easily met its immigration targets. But getting the right immigrant mix to ease Canada's demographic dilemma will require a more aggressive effort to court potential migrants – while in competition with other countries with shortages of skilled labour. Steps can be taken in both the private and public sectors to establish more of a presence abroad, offer incentives, promote Canada's image and set up information and support networks.

In search of new workers

Canadians' perspectives on immigration often depend on where they live. In the biggest cities – Toronto, Montreal and Vancouver – immigration is a long-standing and pervasive element of urban life. In other places, the proportions are often smaller and the arrivals much more recent. Use this interactive tool to find out where the most dramatic changes are happening, and how your own area compares.

Enter your postal code to look at immigration in your community

Canada is the product of a founding fact: Except for aboriginal peoples, each person in its population is either an immigrant or the descendent of immigrants. And every immigration experience is unique. Tell your family's story or your own, and encourage anyone else you know with an interesting tale of arrival and adjustment to share it with Globe and Mail readers, to help build a richer, more complete picture of immigration in Canada.

Did you or your family immigrate to Canada? Tell us about your experience, and your story may be featured in print or online.

A reporter from The Globe and Mail may contact you to follow up. Your phone number and email will not be shared or made public.

Let others know they can share their own story: