Canadians like to think of this country as an agricultural superpower, where farmers grow vast amounts of food to help feed a hungry planet. The reality is much different - far from leading the world in agriculture, Canada is falling behind on many fronts.

Canadian farmers are still remarkable producers, accounting for more than $30-billion worth of exports annually. But they have become less productive, less competitive and more financially strapped than their counterparts in many countries. Meanwhile, nations like Russia, Brazil and even Kazakhstan are investing heavily in agriculture and becoming fierce competitors.

The trend lines aren't promising. In the past 15 years, Canada's share of the global wheat market has shrunk to 15 per cent from 23 per cent, and it has dropped from third to ninth in terms of total food exports. Russia recently surpassed Canada as the world's third biggest wheat exporter, Kazakhstan has doubled its wheat exports, and Brazil has overtaken Canada as the largest agricultural power behind the United States and the European Union.

It's not because other governments are outspending Canada on farm subsidies. While Canada ranks just below average among OECD countries in terms of producer support payments, it's ahead of NAFTA partners the United States and Mexico. Canada is also one of the few Organization for Economic Co-operation and Development members to increase those payments in recent years, according to a 2008 study by the Paris-based organization.

In fact, government money has been flowing steadily to Canadian farmers for decades. Over the past 20 years, direct payments to farmers by the federal and provincial governments have tripled, and total spending on agriculture now tops $8-billion annually. Despite all that spending, farm incomes in Canada haven't budged much in decades, and farm debt levels have soared. Farm incomes are rising in the United States, where farmers carry much less debt. The debt-to-income ratio for Canadian farmers is about five times higher than for U.S. farmers, according to researchers.

So what's the problem? Almost any farmer will recite a litany of concerns - misguided government programs, the soaring Canadian dollar, outdated tax measures and regulations that are 10 years behind those of other countries. Many say Canada is stuck in the past, constantly tinkering with income support measures and ad hoc programs while U.S. farmers leap ahead in productivity, and producers in Australia, Argentina, Chile and Ukraine push aggressively into new markets.

"It's quite apparent that we don't have a vision for agriculture," said Garnet Etsell, a turkey farmer in Abbotsford, B.C., who is also on the executive of the Canadian Federation of Agriculture. "We've got the resource base that's needed to be a strong food supplier to the world ... but we sit back."

Fear and frustration are so high that the CFA recently launched an effort to develop a national food strategy. About two dozen organizations representing farmers and food processors have joined so far, and the CFA is hoping to get consumer groups and government officials involved. The objective is to develop a long-term plan for the whole system - from field to table - by modernizing regulations, driving innovation and ensuring Canadian products are the preferred choice in international markets.

"When you really look at it, we don't value food in this country, because it has been a land of plenty for so many years," said Neil Currie, general manager of the Ontario Federation of Agriculture, who is co-chairing the project with Mr. Etsell. "I keep telling this story of meeting the equivalent of the deputy minister of agriculture from Sudan. Sudan doesn't have food, they have subsistence farming at best. But they have a national food strategy because they value food. They know they need to plan for it because it's not always there."

Federal Agriculture Minister Gerry Ritz acknowledges Canada has fallen behind in recent years. "We were not really getting out there and doing the job," he said in a recent speech to Parliament. "One of the first things asked by a lot of these countries when we got [out into emerging markets]is where have we been? The Australians, the Americans, the European Union, Brazil and some of the emerging economies like China and India are aggressive marketers, and are getting to be more so."

In an interview, Mr. Ritz said the Conservative government has made policy changes to focus more resources on research and development and new markets. "We want to make sure that farmers get their money from the marketplace not the mailbox," he said.

To be sure, there are success stories. Canada has become a world leader in pulse crops, such as beans, lentils and peas, which are in huge demand in Asia. Wigmore Farms in Regina exports beans and peas to 30 countries, and annual sales for pulse processor Alliance Grain Traders Inc., also based in Regina, have jumped to $300-million from $12-million in four years. Others, like Edmonton's Little Potato Company, have developed successful niche products.

But the overall situation is not so rosy; most Canadian farmers still rely on government payments to make ends meet. The figures are telling. Roughly 70 per cent of all government spending on agriculture goes toward so called "business risk management" initiatives, which are essentially income support payments. And the bulk of those payments go to farms many experts say are too small to compete internationally.

"A lot of people who have small farms do it as part of their lifestyle," said David Sparling, chair of the Agri-Food Innovation and Regulation program at the University of Western Ontario. "They are a dentist, doctor or truck driver and the farm is just part of their life. I don't have any problem with that. I'm just not sure that [taxpayers]really need to be supporting a lot of them."

Studies by Prof. Sparling and others indicate that farms need about $250,000 in annual revenue to have the scale necessary to compete. According to figures compiled by Statistics Canada, that's the point where farmers generally start to earn more money from farming than from off-farm sources. A farm that size would roughly be equivalent to an operation with 400 acres of corn, or 700 acres of canola, or 300 beef cows.

Most Canadian farms don't come close to that. Of Canada's roughly 230,000 farms, about 80 per cent have annual revenue below that amount, and more than half pull in less than $100,000. Just about every farm under $100,000 would lose money from farm operations, or barely break even, without government support payments. Put another way - 20 per cent of Canadian farms generate most of this country's agriculture products.

"As Canadians we should be asking our government, you can spend this kind of money but what are we getting?" said Al Mussell, a researcher at George Morris Centre, based in Guelph, Ont. He believes governments have to find other ways to support small farmers aside from sinking more money into income support programs.

Many farmers say a big concern is the multitude of costly ad hoc government programs designed to help farmers deal with everything from drought and floods to beaver dams. While usually well intentioned, such programs often reward farmers who made bad decisions, such as not buying crop insurance. "You know, I don't blame those guys for getting the money, but it made the rest of us look like chumps for always covering our back end that way," Ontario farmer Hugh Aerts told a parliamentary committee last year. "My Number 1 beef is that targeted programs do not work. They create more inequities than they solve."

Governments are already facing the crunch. In Quebec, two recent government-sponsored studies recommended sweeping changes to the province's farm income stabilization program, which spends nearly $1-billion annually. One report concluded that "the agriculture and agrifood sector has a system of laws, regulations, structures, and modes of operation that are so closed they are in danger of literally suffocating it."

Prof. Sparling said it's time government funding went toward other areas such as research and development and opening new export markets. Of the roughly $8-billion spent annually by federal and provincial governments on agriculture, just $156-million goes into research programs and only $140-million is spent on trade development. "I just would much rather see investments looking at the future rather than looking back." 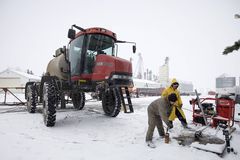 Do corporate buyouts signal the end of the family farm?
November 24, 2010 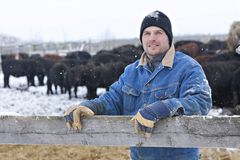 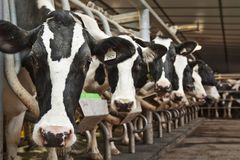 earlier
Why Canadian agriculture is no longer a world leader
November 19, 2010 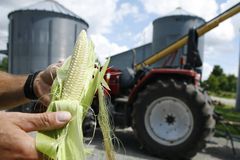 Follow Paul Waldie on Twitter @PwaldieGLOBE
Report an error
Due to technical reasons, we have temporarily removed commenting from our articles. We hope to have this fixed soon. Thank you for your patience. If you are looking to give feedback on our new site, please send it along to feedback@globeandmail.com. If you want to write a letter to the editor, please forward to letters@globeandmail.com.
Comments