Some 600 cases of murdered and missing aboriginal women have been catalogued, half of them in the past decade.

There is a crying need for action. Consider that, if non-native women were dying and disappearing at a proportionally similar rate, the number would exceed 20,000. Do you think that would be a priority?

The Native Women's Association of Canada and the Assembly of First Nations have called for a national inquiry to probe this horrific litany of slaughter and propose a national action plan.

Last Thursday and Friday, the ministers of justice, aboriginal affairs and status of women from all 13 provinces and territories gathered in Winnipeg to mull over the idea.

The federal government refused to participate – an act so contemptuous one can barely find the words to describe it. What do ministers of the Crown who have a constitutional responsibility to aboriginal people possibly have on their agenda that was more important?

At least the provinces and territories had the courage to try, but, disappointingly, their conclusion was that they need more discussion and they won't make a decision until at least 2014.

Bob McLeod, premier and aboriginal affairs minister of the Northwest Territories, said governments are committed to taking action to reduce violence against aboriginal women, but before agreeing to an inquiry, they want to ensure it has a "very clear mandate."

While the caution is understandable, the delay is unacceptable.

Solving the murders of hundreds of young women – most under the age of 30 and victims of sexual violence – and preventing hundreds more deaths has to be a national priority for police, justice and public health officials, and for politicians too.

The ministers are correct in saying that an inquiry into the deaths, if it is to be useful, needs to have a clear purpose.

It can't simply be an open-ended exercise in venting – though, Lord knows, Canada's first nations, Inuit and Métis peoples have a lot of legitimate grievances.

Aboriginal groups have said they want the inquiry to examine two specific areas: 1) how police investigate missing persons and homicide cases and; 2) the effect poverty and socio-economic factors have on aboriginal women.

The former is a must because of the persistent belief that, when aboriginal women go missing or are killed, the efforts are slower and lesser. The latter is a bit more tricky: While nearly all the dead and disappeared came from troubled backgrounds and/or were considered high-risk because they did sex work, had substance abuse or other mental-health issues, or lived a transient lifestyle, those vast challenges cannot be tackled across the board.

The focus of an inquiry on murdered and missing aboriginal women has to zero in on whether police investigations are done properly and how to better ensure the safety of aboriginal women who work in the sex trade and have substance-abuse problems.

If we expect too much of a single inquiry, it will be doomed to failure.

There are, so far, two provincial inquiries under way examining the deaths and disappearances of aboriginal women, and they both offer some cautionary lessons.

Manitoba has created a police task force, called Project Devote, that is examining the cases of eight missing persons and 20 homicide victims in the province (whittled down from a larger list of 85). Most, but not all, of the cases are aboriginal women and they were all involved in high-risk activities such as the sex trade. Solving even some of those cases would be a victory – but still unsatisfactory because it will not offer solutions.

B.C. has the Missing Women Commission of Inquiry, charged with examining the missing and murdered women of Vancouver (most of them aboriginal sex workers) and probing the 1998 decision to stay charges against mass murderer Robert Pickton. That inquiry, which has delved into the socio-economic issues, became hopelessly bogged down in legal battles about standing and procedure. Wally Oppal's report should be released later this month and there is no doubt it will leave many unanswered questions.

So, yes, a national inquiry is required, and a clear mandate is essential.

It shouldn't take two more years to figure out terms of reference. The ministers – provincial, territorial and federal – should lock themselves in a room and not come out until they've figured it out.

Given the bloodshed, the heartache and the desperate need for solutions, it's the least they can do. 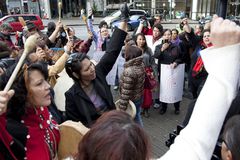