Food-bank use in Canada's largest city has returned to levels not seen since the wake of the last recession, driven by growing demand among seniors and those in the inner suburbs.

An annual tally shows visits in Toronto climbed 9 per cent to a seven-year high of 990,970 this year, The Daily Bread Food Bank's numbers show – up 24 per cent since the recession. The average length of time people are turning to food banks has also risen – doubling, to two years, since 2010.

Census numbers published last week show increases in the share of seniors living in poverty, and that Canada's low-income rate was little changed over the past decade, at 14.2 per cent in 2015. In Toronto, seniors aged 65 and over were the fastest-growing age group of food-bank clients in the past year.

Ernest Simpson is one of them. He was a trucker for 33 years, when a heart attack forced him into unexpected retirement. He now gets a monthly disability payment of $1,267. After rent, hydro, phone bills and other expenses, by the end of the month, there's no money left.

Disability payments are "nowhere near" enough to cover his costs, said Mr. Simpson, 65, who lives in Scarborough, the region which saw the biggest annual jump in visits. "People say, 'Well, you've got to budget.' Well, how do you budget with nothing?"

Some of his medication is covered. For the pills that aren't, however, he often doesn't fill the prescription. He turned to the food bank about eight months ago, but even so, he occasionally skips meals. "The idea of three square meals is not a reality."

The share of seniors at food banks is still smaller than among other age groups, but their numbers jumped by 27 per cent this year.

The increase "may be due in part to the rising cost of housing and food while their incomes remain relatively stagnant," Daily Bread's Who's Hungry report said.

Most seniors in low income would qualify for the federal guaranteed income supplement, which would augment their incomes – but many are not receiving it, the annual report noted. A follow-up survey among seniors showed many thought they were already receiving it; others didn't know about it, or they assumed they didn't qualify.

Mr. Simpson should qualify for Guaranteed Income Supplement (GIS), which would help him afford groceries and medicine. He's applied, but has waited four months to hear back. "It's not come through yet."

Among other groups, a growing number of clients are over the age of 45, who fell out of the labour market in the recession and are having a tough time getting back in, Daily Bread said. Although one in eight food-bank clients get most of their income from employment, the work is often low-paying, casual and part-time: Their median hourly wage is $13, and they work on average 25 hours a week.

Food-bank clients are more likely to have postsecondary education compared with a decade ago, and the share with a disability has also grown.

Scarborough experienced the highest annual growth rate of all regions, at 30 per cent.

In north Scarborough, there is "high demand, and we are frequently serving in excess of the normal appointment schedule, due to increased need in the community," said Christine Markwell, food-bank co-ordinator for the Agincourt Community Services Association, which saw a 37-per-cent increase in numbers.

Some are newcomers – refugees from Syria, Nigeria, Congo and Iraq – who have not yet found a job, or who are working at low-paying jobs. Some are highly trained, but are having difficulties getting their credentials recognized. "It takes time to adjust," she says, noting that it's harder for older newcomers to get a foothold into the labour market.

The increase of people in need comes even as Toronto's economic growth has quickened and its jobless rate has fallen to 6.4 per cent – a divergence which may reflect an aging population, and more people out of the workforce due to disability. As well, high rent costs and increased food prices are causing more people to turn to the food bank, says Ms. Markwell, who estimates families are paying on average about $1,300 in rent.

The hunger count, conducted with North York Harvest Food Bank, is based on the number of visits made between April, 2016, and March of this year. The analysis is also based on 1,466 surveys conducted among clients. 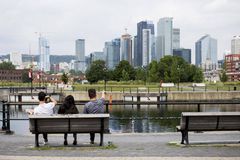 Liberals’ extended EI benefits program exceeds budget projections
July 16, 2017
Follow Tavia Grant on Twitter @taviagrant
Report an error Editorial code of conduct
Due to technical reasons, we have temporarily removed commenting from our articles. We hope to have this fixed soon. Thank you for your patience. If you are looking to give feedback on our new site, please send it along to feedback@globeandmail.com. If you want to write a letter to the editor, please forward to letters@globeandmail.com.
Comments