When Toronto's city council votes on legalizing Uber next week, that decision could have a "cascading effect" across Canada, the ride-sharing company's chief adviser says.

One week ahead of Toronto city hall's decision, David Plouffe – Uber's chief adviser and the mastermind behind Barack Obama's 2008 presidential campaign – visited the city to encourage council to vote in favour of new Uber rules. In a sit-down interview with The Globe, he described the strategic importance of Toronto, and how the decision in Canada's largest city might affect jurisdictions across the country.

"If Toronto were to move forward here, we'll have a cascading effect throughout the country," Mr. Plouffe said Wednesday. "I think other municipalities will certainly look at what Toronto did. I think it will provide some momentum."

After managing Mr. Obama's 2008 campaign, Mr. Plouffe joined Uber last year as "campaign manager" and head of communications. Since then, he has been credited as the driving force behind Uber's kinder, gentler approach toward lawmakers around the world – an approach that appears so far to be working.

Still, while more than 60 cities across the United States have adopted a model known as transportation network companies (TNC) – recognizing Uber-like technologies as distinct from taxis, with a separate set of rules – Canadian cities have yet to follow suit.

Uber and its controversial UberX service – which allows regular drivers to use their own vehicles to pick up fare-paying passengers – currently operates in about 25 municipalities across Canada. So far, only a few of those cities, including Edmonton, Ottawa and Waterloo, have begun looking at TNC regulation.

Wednesday's vote could lead to Toronto becoming Canada's first city to create TNC rules – a move supported by both Mayor John Tory and in a recent city staff report.

According to Uber, not only could the approval of TNC regulation in Toronto serve as a watershed moment for similar legislation across the country, but also serve as a template for smaller towns that don't have the resources to devote staff and time to studying ride sharing.

"It's a very difficult task for smaller municipal governments to grapple with this issue," said Ian Black, Uber's general manager in Canada. "If we get a good framework here in Toronto that supports the safety and innovation, then the benefits of ride sharing open up for the smaller communities as well."

Mr. Black also spoke of the need for a provincewide solution for Uber, saying the current "patchwork" system of separate rules for cities across the Greater Toronto Area causes confusion for drivers.

And while approving TNC regulation in Toronto could cause a domino effect across the country, so, too, could a decision to ban it – as several Toronto councillors have suggested doing.

On the same day as Mr. Plouffe's visit, one Toronto councillor, Giorgio Mammoliti, held an anti-Uber rally for taxi workers, arguing that legalizing ride sharing would spell an end to the taxi industry. Since Uber's 2012 launch in Toronto, the taxi industry has been staunchly opposed to it – most recently taking issue with the idea of allowing the company to operate under different rules than taxis.

"What happens here will set the precedent in regions and in cities across Canada," said Amarjeet Chhabra, a spokesperson for Toronto's iTaxiworkers Association.

"That is why Toronto city council next week needs to make a clear decision and ask for one set of rules and regulations." Toronto looks to update by-laws to recognize new technologies like Uber
May 15, 2018 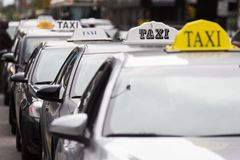