Twelve countries including Canada are closing in on a sweeping deal in Atlanta that could create the world's largest trade zone – including long-prized access to the lucrative Japanese market.

A Trans-Pacific Partnership announcement, originally expected Sunday afternoon, was delayed by a final flurry of negotiations as nations scramble for last-minute advantages before the ink has dried on the deal.

The big holdups, according to sources close to the talks, are two familiar obstacles at these negotiations: how much countries should open up their dairy markets and patent protection for biologics – biological products used to treat diseases.

Canadian government officials insisted at 8 p.m. (ET) Sunday night that only the short strokes remained in talks. But as of 10 p.m., though, a deal had yet to be secured. Talks were expected to continue long into the night.

The wide-ranging TPP pact is expected to emerge in the hours ahead after what has already been a marathon bargaining session in the southeastern U.S. city. The Office of the U.S. Trade Representative, which is playing host to the talks, was forced to reschedule a closing press conference three times on Sunday – eventually saying it is "delayed pending further notice" – and Canada's Department of Foreign Affairs, Trade and Development sent home journalists and stakeholders who had gathered for a briefing in Ottawa.

A deal could hand Conservative Leader Stephen Harper a political victory to brandish on the campaign trail, allowing him to demonstrate proof to voters that he's delivering preferential access to new markets for Canadian business.

NDP Leader Thomas Mulcair has come out against the deal in its current form, trying to consolidate anti-TPP sentiment as his party's standing drops in the polls. He has promised that an NDP government would reject the deal.

Canada's auto and car-parts manufacturers will have to adjust to more offshore competition. A deal would remove the 6.1-per-cent tariff on Japanese cars – a duty that will be phased out over a number of years.

Canadian auto-parts manufacturers will face even stiffer competition from a flood of offshore vehicle parts. About 10 categories of sophisticated components – things such as engines, chassis and transmissions – will be protected by a domestic-content requirement of 40 to 45 per cent. The rest will only be required to have 35-per-cent domestic content.

One win for Canada, sources say, is a so-called "snapback" provision where the Canadian government could restore tariffs on Japanese cars if domestic auto sales falter and imports from Japan surge.

There's clear evidence that Western Canada would benefit from the TPP because many of the industries with a big footprint there are expected to see gains. Beef, barley, pork and canola producers, among others, will gain easier access to Pacific Rim markets, such as traditionally protectionist Japan.

It could be a bit tougher sell for the TPP in Central Canada, where the auto-parts sector would face a flood of new competition from Asian rivals and where the bulk of this country's 12,500 dairy farms are located. The biggest losers are expected to be Canada's dairy farmers, who are concentrated in Quebec and Ontario.

As The Globe and Mail reported first in July, however, Ottawa is readying a compensation package for dairy producers who can prove they are hurt by a TPP deal – a program Conservatives are touting as generous and an effort to blunt criticism.

Still, under the deal, foreign producers of cheese and other dairy products will get duty-free access to several percentage points of Canada's dairy market, a concession that will put downward pressure on prices farmers now get for their milk – and, according to farmers, put many of them out of business. Canada has already ceded about 1.5 per cent of its dairy market to European countries in the pending Canada-Europe free-trade agreement.

The TPP deal will not force Canada to dismantle the supply management regime, which tightly regulates prices and production of dairy, chicken and eggs. But a surge of new imports will depress the prices farmers get for their products, and expose them to significantly lower world prices.

The TPP negotiations would create a free-trade zone stretching from Chile to Japan and comprise 40 per cent of the world's global annual economic output.

The U.S.-led talks are trying to establish a North American-style trading and investment regime for commerce in Asia that becomes the dominant standard and acts as a counterweight to Chinese influence in the region.

A deal would increase protection for patents and copyrighted goods and place new constraints on the conduct of state-owned enterprises.

The dynamics delaying the Trans Pacific Partnership deal Sunday were explained by Australian Trade Minister Andrew Robb. He said a struggle over next-generation pharmaceuticals had a cascading effect on attempts to resolve other issues.

Mr. Robb said the U.S. and Australia had worked all night to resolve their differences on biologics – cutting-edge, cell-based medicines – and made a breakthrough around 3 a.m (ET) Sunday.

He said they'd succeeded in bridging the gap between two entrenched positions: the more business friendly, eight-year patent-style protections the U.S. wants for biologics, and the more patient and taxpayer friendly five-year model preferred by Australia and others.

That caused an uneven ripple effect though. Some other countries weren't pleased with the compromise, and now that discussion has become more multisided with two or three holdouts remaining, he said.

Canada is not too involved in that skirmish. The delay, according to Mr. Robb, wound up pushing other issues to the back-burner until Sunday morning and they were still being worked out later that day. 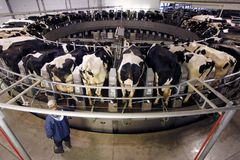 NDP only party with courage to stand up to Harper on TPP: Mulcair
October 4, 2015 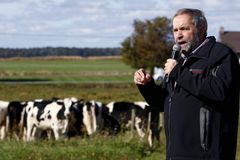