Tanker cars on a train carrying propane and oil derailed and caught fire outside of Edmonton on Saturday, forcing the evacuation of a small community.

The derailment caused explosions, through no injuries were reported. Fire and hazmat crews were on the scene, but firefighters have since opted to let the flames burn themselves out.

"This fire needs to be extinguished by consuming the product," said Jim Phelan, fire chief of Parkland County. "We're going to let it burn itself out."

The train belongs to Canadian National Railway Co. It derailed in Gainford, a village about 90 kilometres west of Alberta's capital, at around 1 a.m. MT Saturday. The train was en route to Vancouver from Edmonton.

Thirteen tanker cars went off the track, according to Louis-Antoine Paquin, a spokesman for CN. Nine of those are pressurized tank cars filled with liquefied petroleum gas in the form of propane, and three of them are on fire.

Four of the derailed tank cars are loaded with oil and have "no indications of any leaks," he said. Mr. Paquin would not say to whom the shipment belonged.

"CN will clean this up, remediate any damage," said Jim Vena, CN's chief operating officer, at an evening news conference.

Carson Mills, a spokesman for Parkland County, said fire and hazmat crews were trying to "contain" any further explosions. "We've already had at least a couple of explosions already today," he said earlier Saturday. "I heard from residents it was a bit of a fireball going across the highway."

About 100 Gainford residents were evacuated from their homes. Mr. Phelan said it could be anywhere between 24 and 72 hours before they're able to return home.

Gainford, which sits on the Yellowhead Highway, is now in a state of emergency. The highway is closed in the area.

The Transportation Safety Board of Canada said it sent a team of investigators to the site, but had been unable to examine the wreckage.

CN said the track was "ultrasonically" tested in September and visually inspected Thursday. "No issues were found in any of the inspections," Mr. Paquin said in a statement. The train was inspected in Edmonton Friday. No issues were detected. It passed over various "flaw detectors" embedded in CN's right-of-way as it moved westward, "again with no issues."

The rail company said it notified local first responders in Parkland County "within minutes" of the derailment, providing them with initial information of the train's contents. CN does not yet know what caused the derailment.

Three of the four cars carrying crude were Dot-111 cars, built last year, Mr. Paquin said. This means they are more puncture-proof than their older counterparts. CN is still trying to ascertain the model of the fourth car that was carrying oil.

Parkland County and Yellowhead County fire crews went to the scene alongside the City of Edmonton Fire Department Hazmat crew and Air One from Edmonton, according to Parkland County. Officials from Alberta Environment and Sustainable Resource Development also went, Mr. Mills said.

In August, 2005, CN spilled about 4,400 barrels of heavy fuel outside Wabamun, about 20 kilometres northwest of Gainford. Much of the 2005 spill ended up in Wabamun Lake.

Energy companies are increasingly turning to rail to move oil and gas to market, arguing North America's pipeline network needs to be expanded. But shipping hazardous materials on railways comes with huge risk.

"As efforts to clean up and rebuild Lac-Mégantic demonstrate, railway companies must be able to bear the cost of their actions," the government said in the Speech from the Throne, delivered Wednesday.

"Our government will require shippers and railways to carry additional insurance so they are held accountable. And we will take targeted action to increase the safety of the transportation of dangerous goods."

In response to Prime Minister Stephen Harper's pledge, CN spokesman Mark Hallman on Thursday said: "As part of sound business practices, CN believes that its liability insurance coverage of more than $1-billion is sufficient to reflect the size and scope of its 20,000-mile rail network spanning Canada and mid-America."

The energy industry expects nearly 10 per cent of the oil they produce in the United States will move by train in 2013. This is partly because projects like TransCanada Corp.'s proposed Keystone XL to the U.S. Gulf Coast are stalled, and partly because by using rail rather than pipeline, shippers have more flexibility in where the cargo ends up.

Trains have a death rate three times higher than pipelines, and have a fire or explosion rate nine times higher when moving liquids, according to the U.S. State Department. Pipelines have the best safety record compared to other modes of transportation, according to the U.S. Pipeline and Hazardous Materials Safety Administration. It is a watchdog that harshly criticized Canadian pipeline giant Enbridge Inc. after it leaked oil about 20,082 barrels of oil into waterways in Michigan in 2010.

Experts have also considered the frequency of spills. Railways had a spill rate 34 times higher than U.S. hazardous material pipelines between 2005 and 2009, according to Diana Furchtgott-Roth, a senior fellow with the Manhattan Institute, a right-leaning New York City think tank. Those pipelines had 0.61 spills per billion barrel miles, she found. Railways had 20.5, she said.

The rail industry did its own math and came up with a narrower gap – a spill frequency of 2.6 times.

Canada has hosted a slew of leaks in 2013. Cars on a CPR train carrying flammable petroleum products derailed in Calgary in September, prompting a small evacuation. The cars did not leak and no one was hurt. In July, after a massive flood swept through Calgary, six CPR train cars derailed and a bridge partially collapsed. Petroleum products were on board.

In May, five tank cars containing crude oil derailed near Jansen, Sask. One car leaked about 575 barrels of oil. The train belonged to CPR. The company also had a derailment in Ontario in April, spilling 400 barrels of oil. In March, CPR cars derailed and spilled oil in Minnesota. About 24 barrels of oil spilled, after 14 of the train's 94 cars went off the tracks.

With files from the Canadian Press and Reuters

Ottawa must improve rail safety or disasters will be the ‘new normal,’ Greenpeace says
October 19, 2013 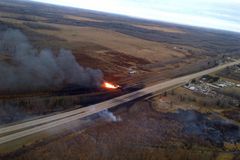 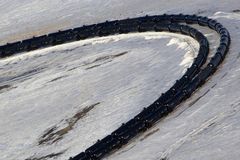