A political power-crowd including U.S. President Donald Trump's daughter Ivanka, cabinet members and scores of foreign countries' ambassadors to the United Nations attended a Broadway play about Canada's assistance to Americans after the 9/11 terrorist attacks.

The crowd delivered a standing ovation as Prime Minister Justin Trudeau introduced the play with a short speech — he began with some jokes about the unusually wintry New York weather and concluded with a more serious point about neighbourly relations.

Trudeau got some laughs when he told the audience: "Thank you for making us feel so welcome with the snow. It's a nice touch. You really went out of your way."

There were cheers later when Trudeau referred to the Canada-U.S. bond: "There is no relationship quite like the friendship between Canada and the United States ... Our friends are there for those tough times ..."

Related: Canadian musical Come From Away conquers the Broadway critics

Created by husband-and-wife team Irene Sankoff and David Hein, "Come From Away" is set in the remote East Coast town in the aftermath of the Sept. 11, 2001 attacks. The town saw its population double in size after local residents sheltered 6,579 passengers and crew from 38 planes diverted when U.S. air space was closed following the tragedy.

"Come From Away" had its official Broadway opening on Sunday, which was followed by widespread critical raves from publications including The New York Times, The Washington Post and Chicago Tribune.

The play offers the proverbial emotional roller-coaster that swings from tear-jerking moments to knee-slapping jokes from Newfoundland residents overwhelmed with the task of handling an influx of visitors.

One recurring subplot involves prejudice against Muslims. An Egyptian man is continually sidelined by frightened characters, rebuffed from helping with the cooking before he can explain he's a world-class chef.

Guests were arriving at the theatre amid breaking political news that a U.S. court ordered a halt on the president's latest executive action freezing refugee processing and limiting travel from a handful of majority-Muslim countries. The president slammed the ruling as unprecedented judicial overreach.

Around that time, the theatre was filling up. The prime minister arrived at the midtown Manhattan venue in the same motorcade as Ivanka Trump. They rolled up to the theatre in separate vehicles, and quickly entered the building where they chatted with other guests.

It was their second event together in a month. Trudeau had a roundtable meeting with Ivanka at the White House when they created a women's business group — one the president has since saluted by referencing in different high-profile settings, including his address to Congress.

The president's daughter chatted with people who came up to her seat in the middle of the hall to get their picture taken. She also exchanged words with Foreign Affairs Minister Chrystia Freeland and her father's ambassador to the UN, Nikki Haley.

There were up to 150 other UN ambassadors in the crowd — people Canada will spend the next few years lobbying in its effort for a temporary seat on the security council. There were also diplomats and politicians who were involved in the aftermath of the 9/11 attacks.

As he walked in, former prime minister Jean Chretien shared some memories about the tragic events that inspired the story being told on stage. Chretien says he and the minister of transportation were made aware of residents of Gander, N.L., taking in thousands of passengers when U.S. air space was closed following the tragedy.

"We were involved in many things," Chretien said as he walked in.

Prior to its arrival on the Great White Way, the homegrown production had earned strong reviews as it criss-crossed the continent with shows in La Jolla, Calif., Washington, D.C., Seattle and Toronto.

Trudeau previously announced on Twitter that he planned to attend the show with his wife, Sophie Gregoire Trudeau, and that he was "looking forward to showing New Yorkers Canada at its best."

Trudeau to watch Canadian musical Come From Away on Broadway
March 15, 2017 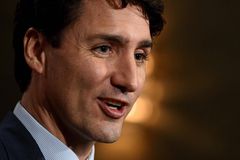 Canadian musical Come From Away conquers the Broadway critics
March 13, 2017
Review
Come From Away: Heart-warming musical lives up to the hype
November 23, 2016
Report an error
Due to technical reasons, we have temporarily removed commenting from our articles. We hope to have this fixed soon. Thank you for your patience. If you are looking to give feedback on our new site, please send it along to feedback@globeandmail.com. If you want to write a letter to the editor, please forward to letters@globeandmail.com.
Comments