There was a time when the controversial police and spy powers in Stephen Harper's anti-terror law, Bill C-51, were a pretty sharp thorn in Justin Trudeau's side. But in government his Liberals have deftly defused the politics.

On Tuesday, Public Safety Minister Ralph Goodale is expected to table his own "comprehensive" national-security bill, one that is supposed to finally fulfill their promise to undo some of the measures that had (mostly) left-leaning protesters across the country campaigning against C-51.

The Liberal bill is not likely to undo half the things those protesters complained about. But it turns out ragging the puck can be effective in politics.

After 18 months of delay and consultations, C-51 is not a hot-button issue any more. And that's valuable because this bill can't please everyone. The Liberals have been signalling that they'll take a different approach to passing this bill: Where Mr. Harper was accused of delivering a take-it-or-leave-it bill, the Liberals will signal they are open to talking about amendments.

It's hard to imagine that Mr. Goodale really wants MPs to tinker with spy powers, but the Liberals hope the "We're listening" approach will soften critics.

At one time, as the Liberals took power, it seemed they would be under pressure to move quickly to undo some of the controversial measures of Bill C-51.

In opposition, the Liberals were being squeezed by this bill. C-51 was the Conservatives' attempt to assert they were taking muscular measures against terror. It came after two attacks in 2014, in Saint-Jean-sur-Richelieu and on Parliament Hill, and not long before the 2015 election. The bill was initially very popular.

But gradually, a campaign developed against a bill that civil-liberties advocates labelled an overreach. The NDP said they'd repeal it. But the Liberals, worried about looking either soft on terror or too much like the Tories, said they'd vote for it, and repeal the "problematic" elements later. A dodge.

So when the Liberals took power, it appeared to be one of those things they'd have to address quickly. A significant chunk of the left-leaning voters that elected the Liberals saw it as one of those Harper-legacy items that had to be undone. But from day one, they delayed.

That turned out to be shrewd. Time cooled the angry politics around it. The protest organizers – who had argued that Bill C-51 gave authorities powers to violate rights, interpret protests as security threats, and collect and share too much information on Canadians activities – directed their energy to influencing the consultations.

"While this consultation was taking place, that's certainly, for example, where my organization was investing its energies," said David Christopher, spokesman for OpenMedia, an organization that played a sizable role in drumming up the protests.

Now, Mr. Goodale can go forward in calmer waters. Some of the controversial elements of C-51 didn't really become the focus of criticism during the consultations. C-51 gave CSIS ill-defined powers to disrupt threats, rather than just gather intelligence; in the consultations, people expressed concern about that, but it wasn't clear what they wanted in its place.

However, the consultation did find people aren't sanguine about the accumulation of electronic-surveillance powers by government: warrantless interception of metadata, sharing of information between government agencies. Canadians want those things controlled. But some of those Canadian intelligence agencies will be arguing they need latitude.

Don't expect the Liberal bill to include wholesale repeals of all the controversial elements of Bill C-51. If the Liberals were going to do that, they'd have done it a lot sooner.

It is likely they will rely on reassuring by proposing stronger oversight. They are already adding a new committee of parliamentarians to review security agencies, and are said to be proposing a new oversight body for the Canada Border Services Agency and more power for existing review boards. When Canadians disagree over whether their spies need more or less powers, most agree more oversight makes things better.

But now, after all this time, Mr. Goodale no longer faces the same political pressure to undo all of the bill that protesters found too hard-edged, and the Liberals plan to slide their update through with a softer touch.

How the powers of CSIS could change under possible new legislation
May 21, 2017
Trudeau taps David Vigneault as next head of CSIS
May 11, 2017
A Liberal sense of mystery surrounds the future of Bill C-51
September 11, 2016 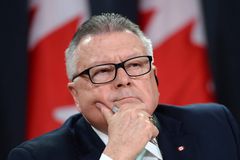