Prime Minister Justin Trudeau is openly talking about referring Quebec's face-covering law to the Supreme Court or joining an ongoing court challenge of Bill 62, ratcheting up the rhetoric in what could become a heated federal-provincial battle.

Mr. Trudeau said his government is closely monitoring the application of the provincial law adopted by the National Assembly last month, suggesting he will not remain idle if he believes it breaches the Charter rights of Canadians.

"We, as you know, are looking very carefully at Bill 62 and at the impact it's going to have on Canadians and the legal implications of it," Mr. Trudeau told reporters. "We're listening to the questions being asked about it and, internally, we're in the process of studying the different processes we could initiate or that we could join."

The Quebec law on "religious neutrality" requires people to show their face when giving or receiving services in places such as libraries, university classrooms, daycares and buses. Critics have denounced the fact it affects Muslim women who cover their faces.

Last week, the National Council of Canadian Muslims and Canadian Civil Liberties Association launched a court challenge in Quebec Superior Court. The groups are seeking to suspend the application of the portion of the law that deals with uncovering one's face until a full constitutional challenge is heard.

Mr. Trudeau previously stated that it wasn't up to the federal government to challenge the legislation. However, he has since expressed his frustration at the lack of clarity on the application of the law from the Liberal government of Philippe Couillard in Quebec City.

"I don't think it's the business of a government to legislate what a woman should or shouldn't wear. My position on that is clear and we're of course looking at what the next steps might be for the federal government," Mr. Trudeau said over the weekend.

According to federal officials, Ottawa faces a number of options at this point: intervening in the court challenge; simply monitoring the court challenge and waiting to intervene at the appeal stage; or referring the legislation to the Supreme Court for a ruling on its constitutionality.

A number of politicians in Quebec have accused the federal government and other opponents of the law of failing to recognize the distinctiveness of the province's approach to religious neutrality.

The Liberal Party's Quebec caucus has been arguing that it would be more prudent to let the debate play out in Quebec to avoid accusations that the federal government is interfering in provincial matters.

In addition, the NDP has stated that while it is opposed to Bill 62, Ottawa should stay out of the legal debate.

"I think it's a bad bill that will only cause more divisions and divisive politics," NDP Leader Jagmeet Singh said in a statement. "I have also been clear on the issue of Quebec's jurisdiction and that I am confident Quebec's Charter of Human Rights and Freedoms will protect the fundamental freedom of expression."

The Conservative Party said that it supports freedom of religion in all spheres of society, but that "ultimately, it's up to Quebeckers to pass judgment on this legislation."

Emmett Macfarlane, a professor of political science at the University of Waterloo who has been closely following the debate, said the Liberal government has been toughening up its position.

"There has certainly been an evolution in their approach," he said.

He pointed out that there would be a legal and political risk for the government to wait the three to four years that it would typically take for the issue to reach the Supreme Court before intervening.

"This is a Prime Minister who has, more than any recent prime minister, emphasized his principled politics. Now that he is staking his position quite clearly, it would be fair to ask questions if they don't intervene in some way," Mr. Macfarlane said.

The law has fostered debate across the country. On Sunday, thousands of people marched in the streets of Montreal to denounce issues such as the election of Donald Trump in the United States, the rise of the extreme right in Quebec and Bill 62.

Fatima Ahmad, one of the women contesting the law, marched in her niqab with a sign that read: "Fear not what you do not understand."

Stacey Gomez of Solidarity Across Borders, a migrant advocacy group, said all levels of government and the wider community should oppose Islamophobia and all forms of hate. A federal challenge of Bill 62 would help, she said.

"Law 62 isolates and immobilizes Canadian Muslim women," said Marlihan Lopez, an FFQ vice-president. "The law emboldens racists and so-called patriots to harass and discriminate on the basis of religion."

Editor’s note: An earlier version of this article incorrectly said Stacey Gomez of Solidarity Across Borders singled out the Trudeau government in saying they should oppose Islamophobia. In fact, she referred to all levels of government and the wider community. 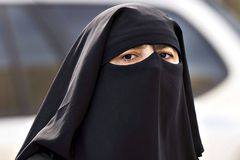 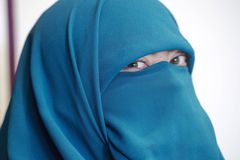 Some Muslim students reconsider university in Quebec after Bill 62
October 29, 2017 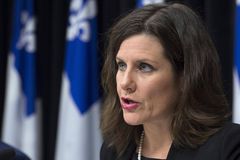